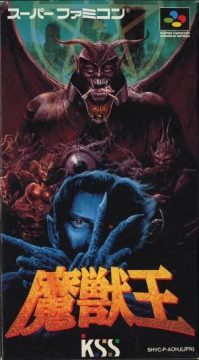 The Super Famicom (and Super Nintendo) had a reputation as a kid’s console, compared to the more “adult” Mega Drive. KSS’ Majuuou (“King of Demons”, sometimes also written as “Majyuuou“) bucks that trend by harnessing the 16-bit power of the system to create a beautifully dark action-platformer. 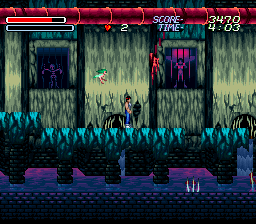 The story focuses on a young man named Abel, who is betrayed by his friend Bayer. Bayer had sacrificed Abel’s family in order to revive Lucifer and become a demon – a pleasant fellow all around. During the prologue, Abel attempts to take him down mano-a-mano, only to be brutally defeated. In the throes of death, he is granted power from his deceased wife to order to take revenge of his family, and enter the depths of the underworld to save his daughter.

Majuuou is most often as described as “Castlevania with a gun”, and at least in the early stages, that’s true. The opening melody of the intro stage sounds a bit like a classic Castlevania theme, and Abel – a fairly generic muscular dude with a red bandanna, jeans and a white t-shirt – walks and controls like any number of the Belmont clan, although can double jump, execute jump kicks, and slightly change direction mid-air a la Dracula X. You start off with a gun, which has both unlimited range and unlimited ammo – it doesn’t shoot any projectiles, so whatever you’re aiming at will take damage when you pull the trigger. You can also hold down the button for a super Hadoken-esque blast. 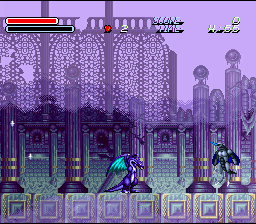 At the end of each level, the boss leaves a jewel, which cycles among three different colors. The color you choose will determine the type of demon you play in the next stage. This aspect is a bit like the Sega classic Altered Beast – the title Majuuou is even similar to that game’s Japanese name, Juuouki.

The red jewel will transform you into a harpy, which attacks with wide range boomerangs. The green jewel will turn you into a lizard creature which can shoot thin laser beams out of its arms. The blue jewel will turn you into a dragon, which has a powerful breath attack. Like the human character, each demon has their own special move, activated by charging the attack button. It may seem straightforward, but there are some neat catches to this system too. If you choose the same demon three times in a row, you morph into a super powered up version. Alternatively, if you choose a new demon each level, and control each of them at least once, then you’ll obtain the ultimate form at the end of the game. 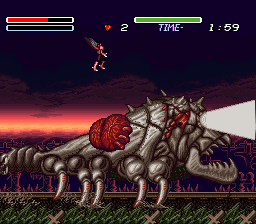 These demon transformations are cool, but the grim overtones help make Majuuou stand out from other similar games. When you are granted power from your wife at the beginning, a fairy flies around with you and protects you from enemies, lunging forward at enemies every time you attack. If you die, the fairy – or rather your wife – sacrifices herself in order to revive you. This gives a sense of urgency to save your daughter even more so since the power-up that gives you the fairy is very rare. It’s also a bit creepy that you’re given the choice to sell your humanity in order to increase your power, or elect to keep your human soul. It seems like a no win situation, especially since you have to turn into a demon in order to get the best ending.

Compared to Castlevania, Majuuou is a bit on the easy side. However, you can make it harder by electing to stay in human form. Since the human’s gun can only fire straight forward, it can be tough to hit enemies in the air, while demons can hit targets much easier. Since it’s more difficult, it would’ve been nice if there were a third ending for those who elected to take on this challenge, but that’s a wasted opportunity on the game’s part. 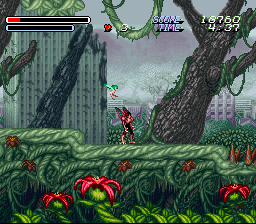 The sprites pretty small, especially for a late Super Famicom game, but at least they’re well animated. However, the graphic designers compensated for this with some completely outstanding background design. Many areas in this game exude a tremendous amount of atmosphere, and the levels are quite to toss you into creepy – and memorable – set pieces. In the first stage, you’re chased by a gigantic multi-eyed worm, complete with extendable teeth, before running into a dead end. Just as it seems like it’s all over, the floor crashes, and you fight throw the sewers. Amongst the zombies – which fall apart piece by piece as you fill their body with lead – there are faint figures in the background of tortured souls. You climb back up and face the worm again, only to be tossed into a elevator, complete with a man-eating spider.

The second stage is a ruined city, overrun by flora, completely desolate except for some monsters and man eating plants – some of the flowers even have creepy faces on them. This boss of this stage is a gigantic bloodshot eyeball – which rotates courtesy of the usual Mode 7 fanciness – and fires lasers from its pupil. In the next level, you board a train made of bones, against the background of a blood red sunset, with all of the skull cars traveling at suicidal speed. There’s even a scene of a girl in chains being flailed by evil horsemen, whom you are utter incapable of saving. Later areas take you through a crystalline, ice-like palace, and then through more traditional underworld settings, like a lava stage. 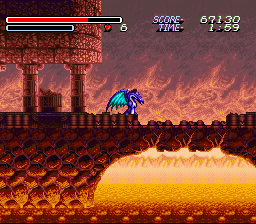 In Japan, Konami dubs the Castlevania series as part of the “horror action” genre, but they’re actually pretty clean compared to this. The design for the final bosses are also striking in their pixel artwork, walking that delicate line between “gorgeous” and “terrifying”. It’s particularly beautiful seeing that the distinct SFC/SNES color palette has rarely been used in create a game this gruesome. That being said, while the game is full of demons and other hellish scenery, there’s not much in the way of actual gore. Altogether, the whole experience is both fascinating and mildly disturbing.

The music was composed by Tomohiro Endo (Ys IV: Mask of the Sun) and Hiroshi Iizuka (Langrisser III). Much of it is meant to elicit a specifically creepy atmosphere rather than traditional video game music, though there are a few catchy tracks, like the prologue and fire states. Some lend appropriately to the atmosphere, like the train and final stages, compared to the fire stage, which is too weirdly blissful. 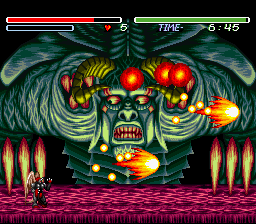 Majyuuou‘s portrait of hell is fascinating, especially for a 16-bit title, and it’s a pretty solid game to boot. It has also been completely translated by Aeon Genesis, even though it is still totally playable in Japanese without a translation. Alas, like many cult classic SFC games, the game is incredibly expensive on the secondary market, especially for a boxed copy. It’s also impressive considering that KSS’s sparse video game output was either licensed drek like Casper or weird gambling games like Bing Bing! Bingo. 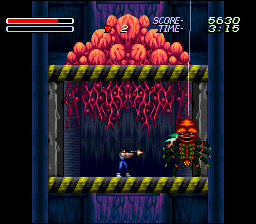 Links:
RVG Fanatic – Majyuuou Another look at this creepy yet compelling game.