Psycho Dream, made by Telenet and Riot (Valis, El Viento), is one of those all too common lost action-platformers on the Super Famicom. It’s a fast paced action title filled to the brim with strange enemies, humongous bosses, and massively chaotic action. 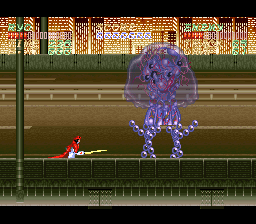 Psycho Dream takes place in an alternate modern day era (that is to say, the 90s), where virtual reality system has entranced the youth of the world. The users become so engrossed with this alternate reality that their mind refuses to leave. That’s the case with a young girl named Sayaka Kaori, who has fallen into a coma. As cases like these have become an epidemic, machines have been developed that allowed people to enter in other’s dreams. 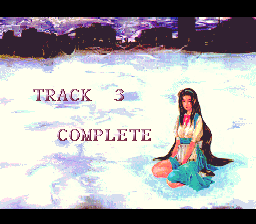 Dreams are, of course, incredibly surreal places, and are often very dangerous. Only experts from The National Public Safety Commission, also known as Diamond Dogs, are authorized to enter. It’s up to Ryo and Maria, two of the best “debuggers” that the Diamond Dogs have to offer, to save Sayaka and wake her from her coma. They have only 24 hours or her spirit is gone forever. 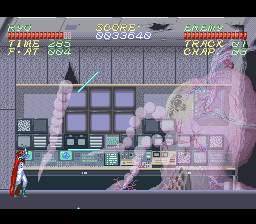 The story isn’t a major element within the game itself, makes for a cool backdrop and creates an excuse for all of the weird types of enemies you’ll fight. It also sets itself apart from similar games (Majyuuou, Valis, Ninja Gaiden, older Castlevanias). It was written by Kenichi Nishi, more famous for Moon: Remix RPG Adventure and L.O.L.: Lack of Love, two of Love-de-Lic’s games. The visuals were drawn by bishoujo illustrator Marino Nishizaki. 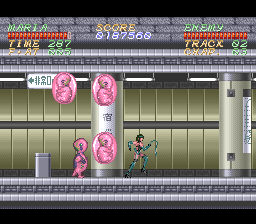 While inside the dreamscape, Ryo and Maria can transform into various forms, which is activated by grabbing colored crystals. Yellow crystals focus more on close combat and heavy damage while blue crystals focus more on ranged attacks. There are also bright red crystals, which only appear if your character is at transformation level three, and will upgrade your character to their ultimate form. The strongest form does have one caveat, though – if you take three hits, your character goes back down to their lowest level.

A very skilled swordsman that wears an awesome red cape, and is actually more machine than he is man. When he transforms, he gets sickles hidden inside his arms, legs, and head. He also has laser cannons in his elbows. At his lowest level, Ryo only uses his sword, which does decent damage, but transforming as soon as possible is a much better idea. When fully upgraded, Ryo’s skin falls off, revealing his robot parts. When in his ultimate form, Ryo becomes a whirlwind of blades, spinning about while shooting deadly lasers all around him.

Maria is more skilled with a whip and in her lowest form, plays closer to a Belmont from Castlevania. Once she grabs crystals though, she loses the whip and gets huge, mutant demon hands or a laser gun. Maria’s demon claws are very fast and destructive, capable of making short work of the many enemies in Psycho Dream. Unfortunately, you typically have to be right in the enemy’s face to get them to hit, so they can be a bit risky. Her laser gun eventually gains homing capabilities, but is not particularly powerful. When fully upgraded, Maria becomes half demon, sprouts butterfly wings, and has her entire arms transformed into weapons. The wings will make her fall slower, but otherwise she plays just like a fully upgraded Ryo. 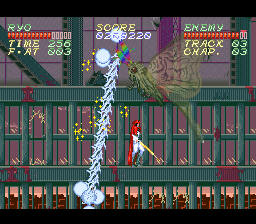 In addition, each character has a screen clearing attack that is initiated by pressing the A button. You can only have a maximum of six of these attacks, as their stock is indicated on the screen. They’re very useful for clearing out infested areas, but only do a single point of damage to most bosses. You are invincible during this attack, so it can be used to block enemy attacks if necessary. Characters can also run faster and jump higher by pressing and holding the shoulder buttons. 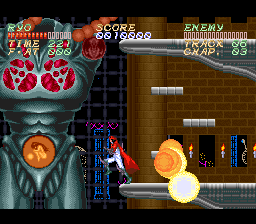 Psycho Dream is a very short game, consisting of only six levels. Even though it can be beaten within one sitting, it does has a very basic save feature. In an attempt to add difficulty, each level has a timer, counting down from 300. The timer never really means anything, though, as it resets once you enter a new screen. The levels themselves aren’t too difficult, but the bosses are just brutal. They take up most of the screen, do tons of damage, have weak spots that are very well guarded, and have health bars that seem to stretch on forever. Some bosses, particularly the giant moth that shoots lightning and the cicada that causes earthquakes, can be nearly impossible without being leveled up beforehand. 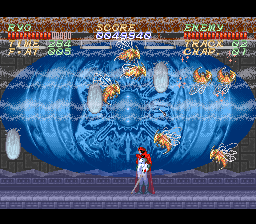 One of the best parts of Psycho Dream is seen at the end of the very first level. After fighting through hordes of aliens crabs and mutant hawks, huge glowing tentacles burst through the room. An eerie glowing mass of phantasmal gel slowly crawls in, starting the first boss fight. This foe is the most impressive part of the game, not only serving as a huge challenge compared to the easy level before it, but also being one of the most visually impressive enemies on the Super Famicom, consisting of many different moving sprites. It even interacts with the background, with its tentacles smashing through walls, ceilings, and television screens. 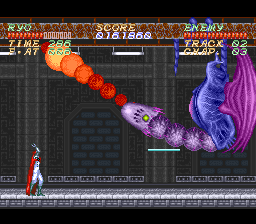 Besides the aforementioned bosses, Psycho Dream offers other fun and original moments. A great example is found on the fourth level, where your character constantly running and unable to slow or squat down. It plays a lot like Edo No Kiba, another Super Famicom game by Telenet, but much faster and more streamlined. 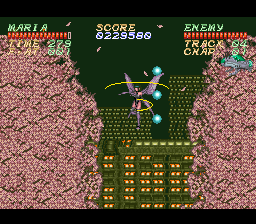 While the visuals are impressive, Psycho Dream‘s music is its weak point. It almost always sounds out of place, like it belongs in some kind of cheesy romance movie or a musical. The last level in particular takes place inside a mine and has falling rocks and is full of traps. The music to accompany this dangerous area doesn’t fit at all, sounding like it would be more at home on Broadway than in a video game. The only two pieces that actually fit are the boss theme, which is ominous and foreboding, just as facing a strange and powerful creature should feel, and the ending credits, which is surprisingly chilling. Michiko Naruke composed the soundtrack, and would later go on to compose music for the Wild Arms series after leaving Telenet. 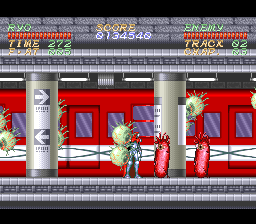 Like a lot of other games out of Telenet, it doesn’t quite having the makings of a lost classic – the level designs are average, and controlling your character just isn’t quite as satisfying as other 16-bit action platformers. Still, the set-up and the visuals ensure that it’s markedly better than most other titles from the developer. 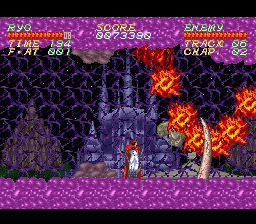 Strangely enough, Psycho Dream almost made it to the United States, under the name Dream Probe, to be published by Renovation. It was very far into development too, complete with a silly North American box design, clear release date, and coverage in magazines such as EGM and Nintendo Power. 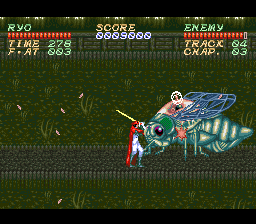