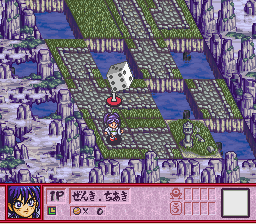 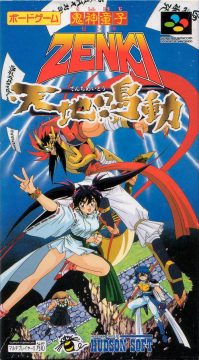 In the mid-to-late 1990s didn’t it feel like every game series out of Japan was getting some kind of digital board game iteration made? Mario, Sonic and Goemon all had standalone board game entries, while something like Fighter Destiny 2 had a board game mode included in it. Tenchi Meidou was the last release in the Zenki series, and for whatever reason they decided to turn it into a board game (with added slide-puzzle, slot-machines and playing card mechanics).

Gameplay is split into two parts. First you’re placed on a themed map/board, with various pathways around it. It’s more like a sliding puzzle though, since the path-tiles are all mixed up. A virtual six-sided die is rolled and, depending on what you roll, you’re given a number of moves to either shift a tile (one move), or have your character walk to the adjacent tile (one move). Your first task is to create a direct path to the goal area on the map, which can actually take a few rolls of the die, especially on larger maps. Once done you walk along until you reach the end. 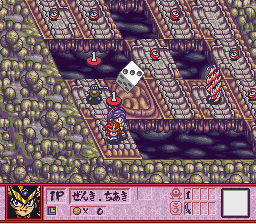 Making things tricky are the various enemies dotted around the board. Touch one and you’re placed in behind-the-character battle scene. This is weird, complex and totally incomprehensible to anyone not fluent in Japanese. Pushing buttons spins a pair of slot machine wheels with kanji on them, with whatever it lands on granting you a series of special attack cards you can use to damage the enemy. Cue fancy screen-splitting graphics-distorting animations and a drop in HP. Afterwards the enemy does the same. Clearly the developers were proud of their battle engine, since you can ignore the “Map Mode” entirely and jump straight into combat, picking your avatar from a roster of Zenki characters, and then choosing the enemy. You can even have the AI control both the main character and enemy, thereby making the game play itself. Although it may sound similar to the first-person combat in Denei Live, it’s marginally more fun to muck around with.

There’s also a four player mode, which looks interesting, but ultimately this is the kind of game where the language barrier is prohibitive and its obscurity means it will never be fan-translated. Whether it even needs to be is another question. A lot of good Japanese RPGs are worth stumbling through with a guide, but there’s nothing especially interesting about a videogame boardgame based on an obscure manga property. You’re better off trying the Goemon one if you want a digital die rolling simulator.

All in all, the Zenki series seems to have ended not even with a whimper, rather a puff of smoke and the roll of some dice.