By the time Pokémon made it to American shores in late 1998, it was an instant multimedia franchise. Having been released in Japan two and a half years earlier, there was plenty of product to flood the international markets: an anime, a trading card game, comics, a high-grossing film, and much, much more.

Around this time, Hudson Soft released Robot Ponkottsu, a game developed by Red Entertainment. The companies had a working relationship for nearly a decade at this point: Hudson published Red games including Tengai Makyou series, Bonk’s Adventure, and Lords of Thunder. While those games are often remembered for their unique visuals and gameplay, Robot Ponkottsu looks like outright Poké-plagiarism on every level.

Released in North America two years later by Atlus as Robopon, it made little impact on the 2000 holiday season. Coming out long after the second generation Pokémon games, it’s easy to see why critics derided Robopon as a massive rip-off. With 150 collectible creatures, a battle system based around elemental weaknesses, and graphics that look wholly stolen from any Generation 1 Pokémon title, Nintendo could have cried K.C. Munchkin and attempted to get this game pulled.

Still, there’s some bizarre gimmicks and subtle nuances to Robopon. Red Entertainment even developed two sequels, one for N64 and another for the Game Boy Advance, both of which take the gameplay in different directions.

Aside from looking like an obvious Pokémon knock-off, the most noticeable thing about Robopon is its colorful graphics. Most characters and locales filled with all sorts of vibrant reds, blues, yellows, and greens. Released a full year prior to the Generation 2 games in Japan, this must have looked impressive on the then recently released Game Boy Color, but any sort of reasonable color aesthetic was eschewed in the process.

This overtly color saturated world is called Porombo Island. You, a young boy named Cody, are tasked with taking over your grandfather’s Robopon Trading Company. There are also Robopon to collect and a group called the Legend 7, the highest ranked trainers on the island. Cody must defeat these masters in order to eventually become the number one trainer. Additionally, there’s the Elite 8, a small group who want to trade for specific Robopon.

Wild Robopon are collected using Magnets and they often drop items when defeated. They predictably level up and evolve as you battle with them, but there’s a lot more to it. It’s more akin to Robotrek in that robot customization becomes the game’s driving force.

Hardware known as parts can be equipped to boost the attributes of a Robopon, but parts also come with a set amount of RAM. RAM dictates how much software a robot can equip, which becomes important as the game goes on. Software gives your fighters extra attacks, and different combinations can create even more attack options for the Robopon.

Attack, defense, and speed are the general attributes and Arm, Move, and Boot are the three overarching Robopon types. Arm types balance all three attributes and Move has higher speed and lower attack and defense. Boot sacrifices speed for higher attack and defense, but they also can’t equip parts. To make things even more complicated, different Robopon also have elemental properties, including normal, fire, water, wind, earth, thunder, ice, holy, evil, land, sea, and sky. Like Pokémon, certain creature types are weak or strong against different elemental attacks. Sometimes, robots will be caught with corrupted hardware and ignore any input in battle until you upgrade their CPU, which isn’t too difficult.

Unfortunately, all of these elements don’t make the battles particularly complicated or enjoyable. Trainer battles play out much like they do in Pokémon. Cody and any other trainer can have up to four Robopon that they switch in and out during battle. Because of all the slow combat animations and the sheer amount of text, fighting quickly becomes a chore.

Robots evolve by collecting energy from any battle. Once a robot has collected 100 units, they can be taken to any town’s Robopon lab and evolved for free. Unfortunately, energy is not difficult to come by, making it possible to grind your starting party to their maximum form even before the first big boss battle.

The world map is also greatly simplified. Rather than connecting towns by roads or dungeons, every town or dungeon is accessed on a static, icon-based world map. Towns are generally small, with a few shops and a couple NPCs to interact with. Dungeons pop up occasionally in the game, but they’re relegated to a few levels with a handful of rooms and only a handful of trainers. These are also the only place to encounter wild Robopon, making it necessary to repeatedly delve back into dungeons to grind and expand your robot collection.

While the core mechanics of the game range from decent to dubious, there are a number of strange touches that keep Robopon interesting. The number one oddity is the physical cartridges shape. It’s slightly longer than any Game Boy Color cartridge thanks to its long infrared sensor, dubbed the GB Kiss. This addition allows players to alter their stats or open chests by pointing any TV or VCR remote control at it and pressing different buttons. Different stats can be altered and certain chests can only be opened using the GB Kiss, but you can play through the entire game without using it. 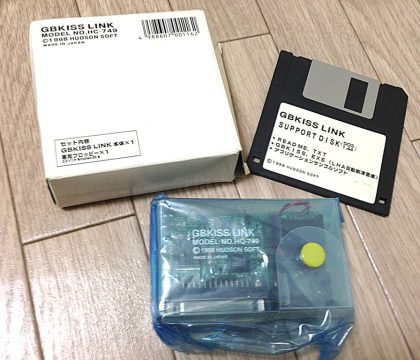 Hudson had far more extensive uses for the GB Kiss in their Japanese releases. Specifically, data could be exchanged between cartridges with the infrared sensor by pointing them at each other, which somehow simulates the act of kissing. A special GB Kiss modem was made for Windows 95-compatible PCs, allowing you to upload save files to a computer. Some documentation reveals that players could download exclusive content from Hudson’s website and then upload it to their copy of Robopon. There also was a text messaging feature which could somehow send messages via phone. Other Hudson games like Nectaris GB and Pocket Bomberman also used this technology and allowed gamers to swap user-created levels.

Most GB Kiss cartridges were the size of a typical Game Boy cartridge, but Robopon‘s over-sized GB Kiss has one bonus feature in all regions: a built-in speaker and clock. These come into play when you’re expanding your new Trading Company building. Carpenter Ken, a man living in your company’s basement, offers to expand your business for an ever-growing fee. The player has to wait real time for Carpenter Ken to add these structures to your building, forcing you to wait an hour or two for a simple item shop. When this time has wrapped up, the game’s speaker beeps to let you know it’s complete. Players can simply cheat the system by easily resetting the clock whenever you feel like it.

Mini-games are unlocked after you join the Legend 7 called the Genesis 5 games. Puncher has a Sunny bot going up against one of your Robopon in a test to see who punches harder. Shielder finds your robot drawing cards to randomly determine their attacks or defensive manuevers. Speedster is a race where one of your Robopon races a computer enemy on a Pac-Man style maze to a marked finish. This is probably the worst of the bunch as there seems to be no input from the player aside from choosing a participant. In Jumper battles, a selected Robopon must tap the A button repeatedly to go farther than a CPU opponent. Battler fights are essentially a basic combat. All of these give you energy, items, or gold.

Eventually, you’re forced to play these games repeatedly. Near the end, there’s five large dungeons filled with enemies who challenge you to the Genesis 5 games. These sections are torturous, especially when you’re forced into Speedster battles. Without the luxury of speeding up the action with an emulator, you’ll be taking on the same opponents over and over for fifteen minutes to win a single race.

The mini-games can be grueling, but Robopon‘s cutscenes tend to be fun. Taking on each of the Legends generally leads to a humorous storyline. On your quest to become Legend 3, Dr. Disc kidnaps his own daughter and retreats to his enormous tower in Libra Town. If he’s up there, there’s no way Cody can beat him and take his title. The only way to get Disc out: you must find bombs to blow up each level of his enormous tower until all that remains is the top floor. Most of the bombs are found in an underwater town, which you can only get to by fishing with expensive gourmet food. Access to a special dungeon with most of the bombs is blocked off by NPCs. Fortunately, there’s an eventual cutscene where a kid throws what he thinks is a ball into the lake. This ball winds up being an explosive that surfaces the aquatic town and forces the NPCs blocking the dungeon to move out of your way. While not every sequence is so zany, there’s enough absurd scenarios to keep anyone with a goofy sense of humor amused.

With its simple premise and oddball tweaks, Robopon is definitely a one of a kind clone. There’s a lot of strange things going on with the game’s design, story, and GB Kiss technology, and you’ll either love it or loathe it not for the borrowed ideas, but for the unusual elements it brings to the table.

Humorously, Nintendo published the Pokémon Trading Card Game by Hudson within two weeks of Robopon‘s release. It’s possible that assets were shared between the games with a similar world map set up and sprites, although this is purely speculation. 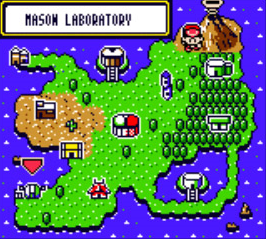 Robot Ponkottsu was initially released with Sun and Star versions in Japan, similar to Pokémon‘s initial Red and Green games. Appearing in December 1998, both featured different items and robot parts that made it possible to craft only certain Robopon. Two special editions appeared the following year on Christmas Eve. A special edition Moon version adds an additional 18 Robopon, but the real oddity is the Comic Bom Bom version. Made to tie-in with a Robot Ponkottsu manga serialized in the titular magazine, the Comic Bom Bom edition changes the appearance of many Robopon to match their appearance in the manga.