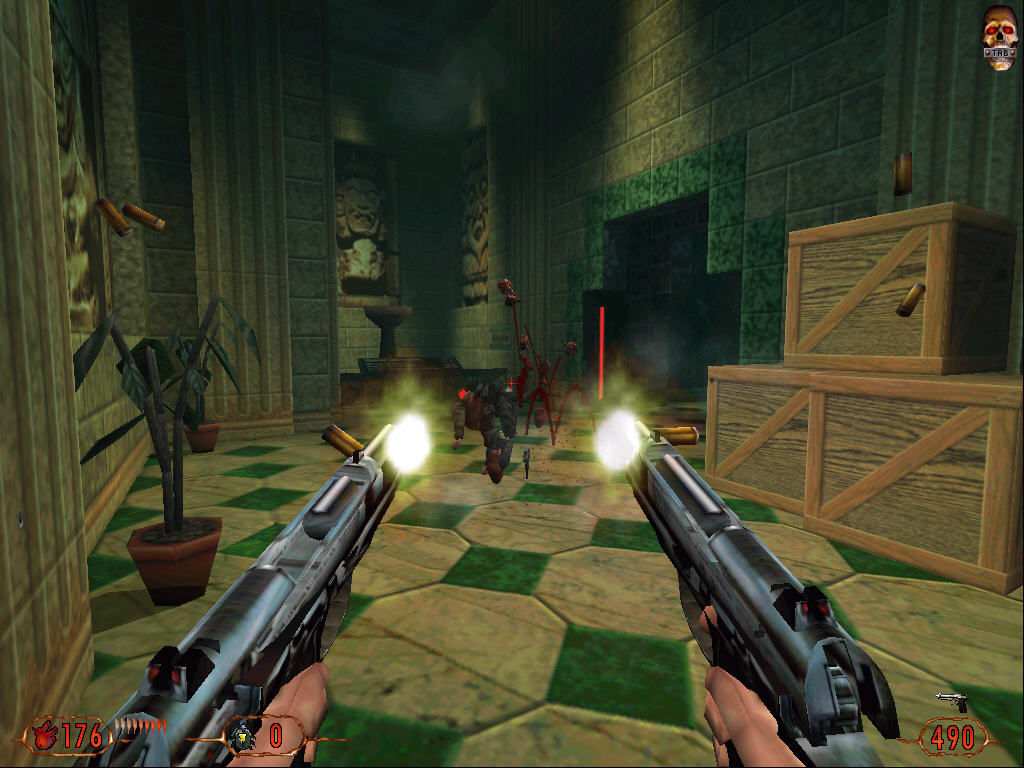 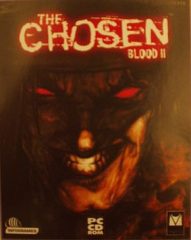 On Halloween of 1998, Monolith released Blood II: The Chosen, the first and only official sequel to the original Blood. Set one hundred years after the events of the original game, Blood II follows Caleb in a dystopian future America as he tries to finish off a highly modernized version of his former cult, now known as CabalCo and run by his old rival, full-time supervillain Gideon. It was built using Monolith’s new polygon-based 3D engine “LithTech”, which was first used in the development of Shogo: Mobile Armor Division. 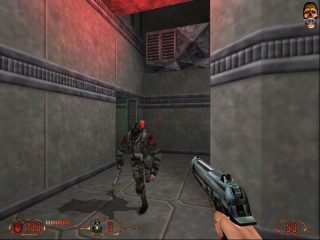 During the project’s development, Monolith CEO Jason Hall was actively involved in the growing Blood II community, where he basically used the forums as a focus group: getting feedback based on screenshots of the current build, and asking the fans what they wanted to see in the final product. Unfortunately Monolith learned the hard way that focus groups have dire consequences: trying to please every fan of a small fanbase, while also striving to appeal to the lowest common denominator, results in a rushed project that doesn’t please anybody and ultimately kills the franchise. Years later the same approach was taken by Namco’s US branch when they developed the Splatterhouse reboot, with almost identical results. 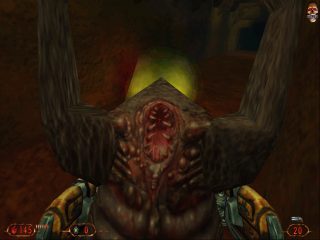 And it definitely looks and feels like a rush job: beyond the saving grace of Caleb’s usual snarky banter, the whole experience feels like you’re playing a bad budget title. Apart from a handful of truly badass promotional art pieces and the fact that Stephan Weyte returned as our beloved Caleb, Blood II was a miserable failure, riddled with enough bugs, unimaginative gameplay, and annoying attempts at humor to guarantee its plunge into obscurity. Before the advent of Steam, you were lucky if you could even get the game to run at all, let alone play it for more than a map or two before it crashed. The LithTech source code was released in limited capacity to encourage modding, but it yielded little more than user-made bug fixes that should have been present in the original release. 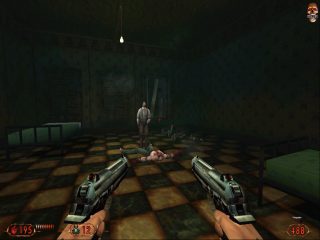 All of the originality of the first game is gone, replaced with copy-pasted maps you quickly get tired of revisiting, boring and identical hallways, heaps of bland and mostly useless weapons, and bland, forgettable monsters. Remember all the distinct locales of the original game? A twisted carnival with memorable attractions? A mortuary with a playable harpsichord? A horrifying spider lair or two? Nothing of the sort here: instead we get bland gray alleys cluttered with the same garbage cans and trash bags over and over, the same piss-colored apartment complex walls, the same exhaustively dull white corporate offices as far as the eye can see. Every texture has a nasty “smeared” quality like it was made for the Nintendo 64, somehow making the locations even more monotonous. There is an obligatory train level, like in the original; unlike the original, it’s a subway train, and every car is exactly the same. And you fight through that same damned subway train three or four times. And it always crashes at the end. Because humor.

Or what passes for humor. The gags in this game have a higher mortality rate than the monsters. The prank callers and fourth-wall-breaking telemarketers feel like they’re trying too hard to recapture the magic of the original: after you answer the second ringing phone, you’ll never want to interact with an object again. There’s a whole level based on Caleb riding an elevator to the roof of an absurdly high skyscraper, listening to musak the entire way, which is initially funny, but five minutes later not so much. The jokes should be funny: it should make you laugh when the Ancient One flubs its villainous monologue at the end of the game, struggling for scary things to say while an unimpressed Caleb rolls his eyes, but all it ever manages to be is tiresome. Admittedly Caleb has some funny new one-liners, and his interactions with Gideon are sometimes pretty golden, but whereas the original game was bursting with life and personality, this one feels like it’s on life support. It just can’t be bothered. 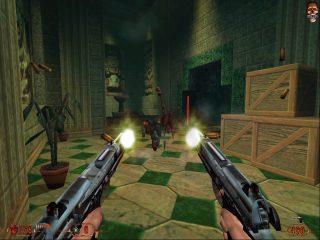 Blood II‘s attempts to flesh out Caleb’s fellow Chosen – Ophelia, Ishmael, and Gabriella, all of whom we saw die in the original game’s opening cutscene – fall flat at best. You can play as any of the four antiheroes in multiplayer mode, but the only one who is remotely memorable is Caleb, so there’s really no point. There are many unskippable cutscenes (of course, we’re entering the era of modern gaming after all, when developers would much rather be making movies than interactive entertainment) using the in-game models, which neither emote nor gesticulate while talking – they stand and endlessly repeat their awkward idle animations, gyrating left and right like wind-up robots and not even looking their conversation partners in the eye, almost as if the scenes were thrown together as an afterthought.

It’s impossible to describe the guns beyond their generic purpose. Pistol. Shotgun. Lightning gun. Spray can. Knife. Assault rifle. The only stand-out weapon is the Orb, which is basically the skull-drilling Sentinel Sphere from Phantasm. Almost every weapon can be picked up twice for double the firepower at double the ammo cost, and while you can opt to drop the extra guns (say if you prefer one pistol so you can fire it gangsta style), you’ll accidentally pick it up again a minute later – essentially the dual-weapons mechanic is forced upon the player. There are also more guns than gun slots, allowing you to drop and pick up your arsenal until you’ve customized the weapon order as you see fit. It’s actually not a bad idea, but fewer guns that each serve a unique purpose – like the original – would have been far less tedious. 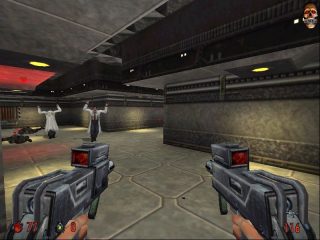 The monsters give the impression that the developers wanted to see how the original game would have looked if designed by people with no imagination whatsoever: generic zombies, generic suited henchmen, and “Blandcraftian” alien creatures that defy description for all the wrong reasons. The monsters in Blood were generic at a glance, but they had character and detail that made them memorable: bulging Evil Dead eyes, horridly distinct voices, and sharp, hideous features. Blood II‘s monsters seem like they belong in a different game altogether, perhaps a generic Unreal ripoff or a bad horror game endorsed by Clive Barker… and they never, ever shut up, constantly spouting their one or two taunt phrases until you eventually kill them (or yourself). Blood‘s phantasm monster was annoying due to its constant, shrill shrieking; here, everything is trying to annoy you to death, even the helpless pedestrians who beg at a rate of twice per second!

Making a visually and atmospherically distinct horror-action game set in a dystopian future shouldn’t be this difficult. Imagine if Blood II had beaten Bioshock to the punch with a retro-future setting, with steampunk cities in the sky rather than miserably dull corporate cubicles. By using marketing and focus groups instead of creativity, Monolith managed to strip away everything that made Blood memorable, replacing it with a formless sleekness that better fits the lazy vision of today’s shooters. Maybe they were just preparing us for the monotony of the F.E.A.R. series. Swish!

Its one and only expansion, the Nightmare Levels, has an interesting, though poorly-executed concept: forcing the player to relive a horrifying moment from each Chosen‘s twisted past. This should be an awesome expansion that trounces the original game in every respect, but as usual Monolith dropped the ball and rushed it onto the market instead of taking the time to make something worthwhile. All of these “nightmares” can be completed in a matter of minutes, yet somehow they still manage to be tedious as hell! Caleb’s nightmare is a half-assed nod to the icy second episode of the original, right down to the hooded cultists who – you guessed it – never shut up. Gabriella has a spooky night in a haunted mansion, which is supposed to be the funny chapter, but isn’t, because Ishmael was shooting clowns at a circus in the previous level. The only nightmare that really shows potential is Ophelia’s, where she relives a cultist attack on her sorority house – by the concept alone this should have been terrifying, but it’s just more of the same. After revisiting Caleb for a wild west shootout, you face the Nightmare boss, which immediately gets stuck on the arena architecture and allows you to empty your arsenal into it. Yawn. 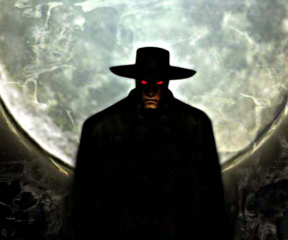 Most Blood fans will tell you the original is one of the best shooters ever made, and won’t even mention the sequel in the same sentence. It’s no surprise Blood III died during conception; if Blood II was any indication of things to come, it’s probably for the best. As usual, the modders are doing it better.