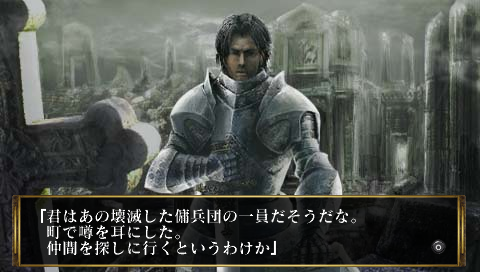 The two King’s Field Additional titles on the PSP are both strictly old-school 90-degree-grid-movement first person RPGs. They seem hastily designed, there is practically no animation nor even smoothed movement between map tiles, and the solid artwork can’t make up for the fact that both games simply do not play like a King’s Field game. Or even a particularly good Wizardry cop-off.

The first game portrays you as a member of a unit of knights, whom having previously visited the local dungeon (as you do, particularly on Thursdays), were decimated in a particularly deadly battle. After waking from a year-long coma (funny how it’s always an oddly specific length of time), you naturally set out to find out what happened to your unit.

The second game takes place 10 years on, earthquakes near the town open new parts of the dungeon. A party is sent in to ensure that the Pillage King has not re-awakened. The leader dies, you rush back to their son to inform him of the event, only to be met with disbelief and probably some nasty words. So off you trot merrily into that most dangerous of places again, to find the truth. Really, if it weren’t for the different introduction movies, dialogue and dungeon layouts, this looks practically identical to the first game. Nearly all of the assets are identical.

Progress in both games involves – in a similar fashion to old-school RPGs – visiting the town, dropping into the dungeon for a bit, keep going until you’re nearly dead, then beating a hasty retreat to the town again. Gold is better earned here in the casino rather than killing monsters. There’s somewhat more NPC chat this time, given that you can select places to visit around town on the map but there isn’t much point elaborating: it looks like a 90-degree angle fixed-map, turn-based RPG, except with boring real time one-on-one-combat. There is still the strength bar on screen, allowing you to attack but since you can’t actually move in combat, all you can do is hold up your shield to block enemy attacks. You can’t hold up the shield for too long since it also drains your strength, but careful balancing is the only way you won’t get decimated by even the lowliest of foes.

Everything that was the essence of the King’s Field games has been completely removed. Gameplay involves step-by-step movement, picking up the odd object, attacking a monster through turn-based combat, and moving further and further into the dungeons. The art is gorgeous, and the music consists of a lot of reasonable remixes of previous tunes, but the magic isn’t there any more.

Word was posted on the Agetec forums that Mark Johnson of Agetec officially stated they had no interest in localizing either King’s Field Additional game, which seems like a wise decision.

The first game takes place in a huge labyrinth with the usual array of caves and corridors, and apparently no magic. The second game sounds similar to King’s Field 2 in as much as you can expect ice caves, sea shores and insect nests. Magic returns, too. The third game looks very similar to the first PlayStation King’s Field, right down to using the same monsters. All the games supposedly have an automap which fills itself as you progress, which is a first for the series.

Like most cell phone games, sadly it seems they will be forever stuck in their native land.

Official sites for King’s Field Mobile, Mobile 2, and Mobile EX. Examination of the sites suggests the games were initially released respectively in 2004, 2005 and 2004.

Onore no Shinzuru Michi wo Yuke