Despite numerous cameos and references throughout the years, NiGHTS did not receive a sequel until 2008, with NiGHTS: Journey of Dreams on the Wii. While many fans eagerly anticipated the release, 12 years is a long time in the video game world, and the evolution in game design over that time span resulted in a game that many weren’t quite expecting. Takashi Iizuka, the lead designer of the original, returned as the director, though the game was actually developed by Sonic Team USA, the same team who worked on Shadow the Hedgehog. 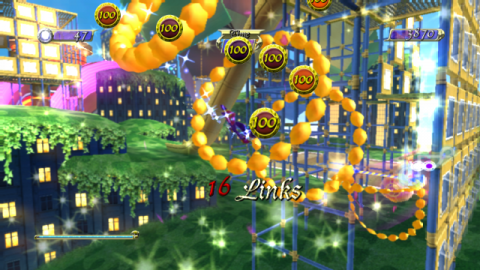 The concept of Journey of Dreams is essentially the same as the original – two children, a boy and a girl named William Taylor and Helen Cartwright respectively – are faced with issues in their real life, but find escape by dreaming of Nightopia. Again, each has three unique stages (Pure Valley, Lost Park, and Delight City for Will, Aqua Garden, Crystal Castle, and Memory Forest for Helen) and a shared final stage (Bellbridge), making for seven levels total. Now, however, each stage is divided up into five sections, in an attempt to expand the content.

The first section is similar to the gameplay of the original NiGHTS – the eponymous jester has been captured in a cage, and your chosen child needs to free him/her. When you take to the skies, however, the goal isn’t to collect orbs, but instead to chase a fleeing bird which holds a key. There are still chips and loops, of course, but they’re only there for scoring and dash regeneration purposes. Once you get the key, you can return to the Ideya Palace and begin the next Mare. 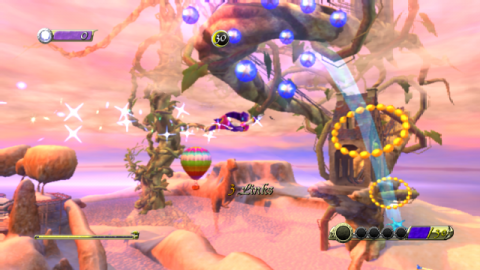 The changes here are fairly significant. The Ideya Cage is gone, of course, but once you have the key, you cannot continue to replay the Mare – you’ll automatically move to the next track. Although you can continue to replay it if you fail to capture the bird, there’s no real advantage to this, since you are judged on time as well as links, and most items do not regenerate with repeated plays. On that note, Bonus Time is completely gone, removing one of the most important elements of the original game. You’re still judged on performance, but there’s less of an incentive to memorize and consistently replay each stage.

While the acrobatic feel of NiGHTS is faithful to its predecessor, there are still numerous other changes. The Mares are longer, since they’re no longer meant to be traveled over and over. The camera is zoomed out more and is more consistent, so it’s no longer nearly as confusing for first time players. It’s certainly more friendly to beginner players, at least. 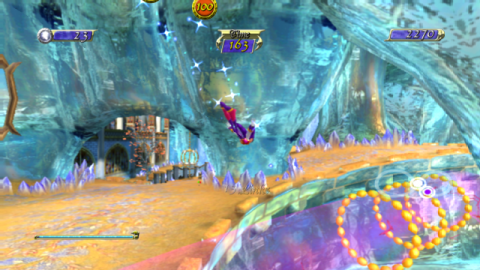 After conquering all of the Mares, you have to fight a boss battle. These are largely the same as before, and despite some creative enemies, they’re still clumsy and confusing. At least you’re given a few hints on how to beat each foe, which is better than nothing, but it still may take a few botched attempts before you really figure them out. The second sections of the stages depend on the level, but they’re usually a shorter mini-game of some type. In one you need to push around bubbles into one larger bubble at the center of the arena. In another, you need to explore the city section of one stage to find and kill a certain number of enemies. Some of these are fun, but others are tedious.

The third section is one of the most fun parts of the game, where you spend the first Mare of the stage chasing a creature called an Octopaw. Unlike the key-carrying bird, the Octopaw can never be caught, but instead it creates a steady stream of rings to fly through. The goal is to keep your link going as long as possible, as the level loops infinitely until you lose too many links. It’s one of the few areas that maintains the score attack sense of the original, but it’s also far too easy, and far too short. The fourth section takes place entirely on foot as one of the kids. These sections are incredibly simplistic platformers where you simply walk forward, jump on platforms, avoid enemies, and occasionally hit switches. Here, you can throw chips to stun and kill enemies. You’re also under a time limit, though there are so many time regeneration items that it’s hardly an issue. These segments aren’t unplayable, but they are incredibly boring, and it would’ve been wise if they’d been cut entirely. The fifth section is simply a replay of the boss battle. You have a longer time limit and there are some minor changes, but ultimately it’s not that much different than the first time you fought them. 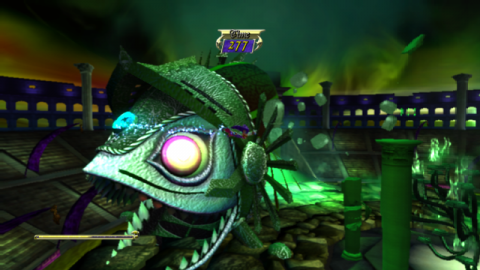 As with before, once you beat three stages, you’re off to the final area, which is mostly a revamped version of the penultimate stage in the original NiGHTS. You’re still allowed to finish the game without high scores, but you are required to get a C grade on all sections in all levels before you can get the true ending. Getting high ranks will also unlock a number of goodies, including the ability to play as Claris and Elliot, as well as the entire soundtrack to the first game. The A-Life mode has been expanded and renamed “My Dream”, and using the Nintendo online connection, you can even visit friends’ gardens. Additional online functionality includes a two- player mode (both racing and battle, the latter similar to the original game) and leaderboards. There are, again, slight changes in the levels depending on the time of year, and it even checks out the Nintendo Weather Channel to see the weather in your area and adjust the in-game levels accordingly.

Also new are Persona Masks. In the original NiGHTS, you transformed automatically into mermaids, sleds, and other forms automatically, depending on the section of the game. In Journey of Dreams, once you obtain the masks, you can change into a rocket, a dolphin, and a dragon. These alter the speed of the dashes, along with other abilities – the rocket lets you fly faster but won’t let you change direction, the dolphin lets you fly underwater, and the dragon lets you resist oncoming wind. Functionally, they don’t really add much, although they’re put to use in the final battle against Wizeman, which is very similar to the first game, otherwise. 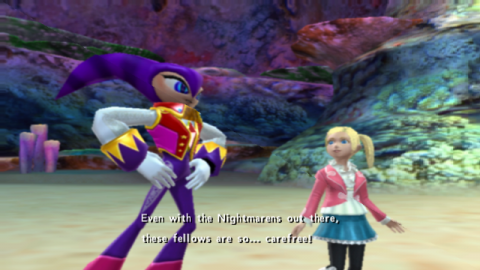 The controls are decent, although hampered by the input devices themselves. There are several control methods, though none of them match the perfect control of the Saturn analog pad. You can control Nights with the Wiimote by pointing a red orb called Mindsight, but it’s practically impossible to use effectively, and is best left ignored. You can use the nunchuck or Classic Controller, but the analog pads on both just aren’t as smooth for the type of 360-degree maneuvers Nights is supposed to be able to make. The best method is the Nintendo Gamecube controller, whose analog pad is a bit tighter and isn’t hampered by the octagonal gates on the Wii devices, but it’s still somewhat slippery.

It’s obvious that Sonic Team was attempting to address many of the issues that the mainstream audience had with the original NiGHTS. The tutorial at the beginning is actually quite needed and welcome. However, while some of it works in its favor, most of it doesn’t. It certainly has a lot more content than the original, but whether that content is any good is debatable. It seems to have fallen into the same trap as the post-Genesis Sonic games – that is, the reuse of levels and other assets in other content in order to expand the game. Just as most of the Sonic games are generally only good if you’re playing as Sonic (and lousy if you’re playing as any of the other characters), Journey of Dreams is pretty great as long as you’re in the flying stages – that is, the areas most similar to the original game – and mediocre-to-awful elsewhere. 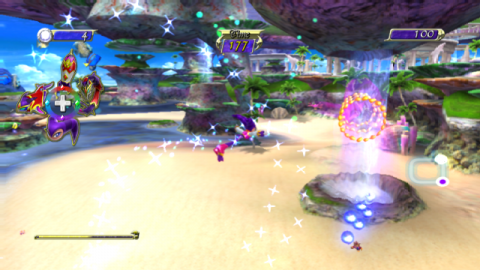 The developers also attempted to greatly flesh out the plot, which made sense considering how bare-bones the storytelling was in the original. Sonic Team has historically been awful when it comes to this, though, and Journey of Dreams is no different. Helen and Will are introduced to Nightopia by an owl named Owl, who acts as a pompous stick-in-the-mud until they’re joined by the carefree Nights. They spend a lot of time discussing the game’s halfway incomprehensible lingo, discussing things like courage and whatnot, and generally being fairly aimless. The English voice acting is mostly done with British accents. Nights also speaks for the first time here, with his/her voice run through a filter in an attempt to mask its gender, though the actor is clearly female. Most of it is grating.

This normally wouldn’t be an issue – after all, NiGHTS is still technically aimed at kids, who may potentially have more patience for the kind of gobbledygook the game spouts out. You can’t skip these cutscenes on the first playthrough, though, and given how long they last, they become almost painful to sit through. At least you can pass over them on subsequent replays. 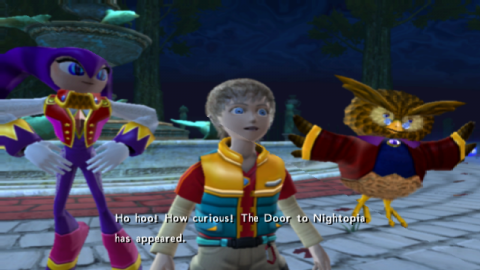 The visuals are also incredibly uneven. During gameplay, Journey of Dreams is beautiful – absolutely gorgeous. The original game was held back by early 3D hardware, but still had fantastic artwork. Now imagine that artwork, unconstrained by low-res textures and low-count polygonal models. The landscapes, beautiful seashores, fantastic amusement parks, musical forests, and neon-lit cities are at least as inspired as the levels of the original game, and they’re just as much fun to experience as before. In contrast, however, the cutscenes look terrible. While Nights looks decent, the children’s character models are terrible, the animation is sketchy, and the shimmering textures are rather ugly. It seems that when the camera is zoomed out, as it is when playing as Nights, the game looks gorgeous, coming across easily as one of the best looking games on the Wii (up until Super Mario Galaxy came out, anyway). When viewed up close, though, the visuals just totally fall apart.

At least the music is incredible, with an assortment of joyful, inspiring pieces. The sound team is the same as the original, with a few extra contributors, and the music benefits from the improved instrumentation, as well. However, the music no longer changes depending on the Nightopians’ modes, and instead the multiple arrangements of level themes are used in the different sections. 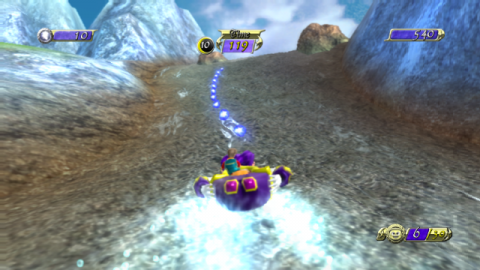 In summary, there’s a lot to like about Journey of Dreams, but there are lot of problems too. The fanbase was largely unforgiving of the issues, alienating the hardcore players, and it failed to attract the fabled Wii casual audience, resulting in a game that’s generally regarded as disappointing. There’s at least 75% of a pretty decent game here (the Nights stages, the Octopaw levels), it just involves suffering through the other 25% (the on-foot stages, the cutscenes). Even at its best moments, though, it never quite captures the intensity and skill required of the original game – it’s easier to play, but not as fun to master.