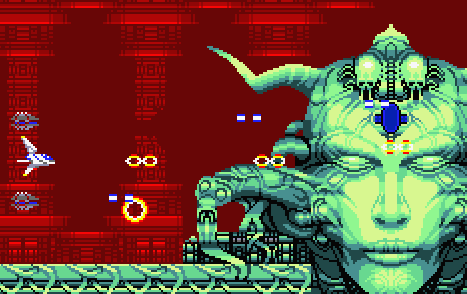 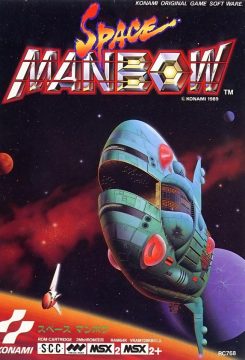 Space Manbow is the most beautiful 8-bit shooter in existence. While it started off as a port of the arcade title Thunder Cross, it eventually morphed into its own completely original title, and is one of the most well regarded and sought after titles on the MSX2. 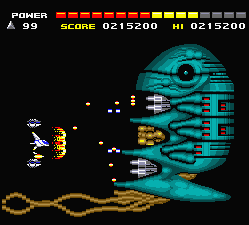 The game takes place in the region of space called Alfred-4, as the denizens discover the remains of an ancient civilization. Unfortunately, they end up activating its defense system, a gigantic battleship called the Sun-Fish. Taking control of a ship named the Mambo-J, a young pilot named Clever Mew takes off to destroy it.

The “Manbow” in the title is actually supposed to be “Mambo”, as in the mambo fish. (The working title was “Egzart”.) Your ship is shaped like one of these distinctive fish, and some of the enemies have a mechanical aquatic theme. You can expect to fight some robotic squids and lobsters, although it’s not nearly as overt as Darius. Beyond that, there are traces of the Gradius style in the visuals, with some incredibly detailed sprites drawn in the MSX’s distinctive color palette. 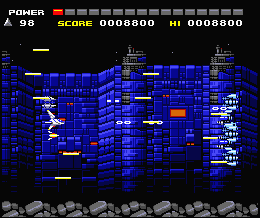 Space Manbow is the only Konami shooter made for the MSX2. It’s a fair bit smoother than the other games on the MSX, with much less choppy scrolling, multi-plane backgrounds, and tons and tons of colorful, detailed sprites. There’s a bit of slowdown, but very little flicker considering the number of sprites on screen. It’s also one of the few games that utilizes the MSX2+ standard, which supports scrolling implemented in hardware, though the difference is small.

There are only two main weapons – a default needle shot and a spread wave – although you also have stationary Options which fire regular bullets.  You also start the game with an empty energy bar, which is increased by picking up orange orbs. Once it reaches a certain threshold, your weapons become more powerful. However, the bar depletes over time, so you need to keep grabbing them, lest you find yourself with wimpier weapons. The upside to this is that the energy bar doesn’t reset when you die, but there’s not a whole lot of difference between the weaker and stronger weapon types. It’s a little disappointing that the weapons don’t power-up again when you max out the gauge. 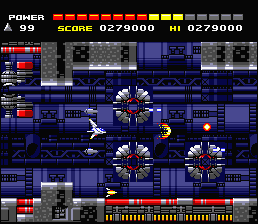 There are Options to collect, up to two, which hover in the same formation above and below your ship. They can be oriented to fire forwards, backwards, or both directions vertically, though they only fire regular bullets. Enemies also drop standard missiles and speed-ups. Every so often they’ll drop a blue orb, which are smart bombs. You can store and use it when you like, although since it’s activated by the fire button, you can’t fire at all until you drop it, which limits its tactical usage. 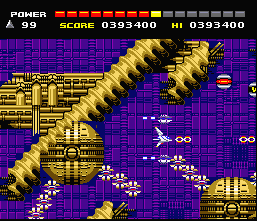 Space Manbow is certainly impressive on a technical level, with design sensibilities that more closely mirror arcade games. Most of the first stage is spent taking on the lower turrets of a gigantic, moving, treaded battleship. You slowly continue your assault up to the control tower, hit its weak point and blow it up… and that’s not even the level boss.

A few of the stages resemble Gradius levels, but for the most part, they include an assortment of futuristic bases. The most memorable is a bit darker than most Konami games, with a dark red background, insect enemies, and demonic skulls that suggests you’ve entered an outer space version of Hell. The level boss is a gigantic, green, sleeping human head, whose defenses are fairly weak, suggesting it’s the final boss, per Gradius standards. And yet, once you inflict enough damage, it opens its eyes, the screen blinks… and all of a sudden, you’re flying in an asteroid field, complemented with dream-like music.  The head thing is supposed to be a warp mechanism, but it’s all very trippy. 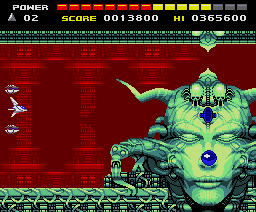 In this asteroid level, you’re constantly assaulted by gigantic laser beams from an enemy far off screen. You can dodge these by hiding behind asteroids, which shield part of the blast. The theme of this stage was reused for Thunder Cross II, which remains the only tangible connection between the games.

Like many of Konami’s other MSX shooters, the music utilizes Konami’s SCC sound chip, so the  instruments sound particularly rich. Compositionally, it’s also brilliant, with some catchy level tunes and one of the most foreboding boss themes Konami has every composed. One of the composers is Tsuyoshi Sekito, who later worked on Square’s Brave Fencer Musashi.

Compared to other Konami shooters, Space Manbow isn’t too difficult, but the checkpoint system is harsher than normal.  They’re very sparse, with typically only one in the middle of the level, and some stages seem long due to the relatively slow scrolling speed, so it takes a bit of time to recover lost ground. 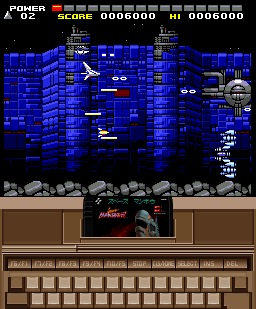 Ganbare Goemon for the DS has an unlockable Space Manbow minigame, featuring the entire first level. To unlock it, you need to put in both the DS game, and the Kessakusen! Ganbare Goemon 1 & 2 Game Boy Advance cart. The graphics are identical, though the music is slightly upgraded. It’s a nice teaser, though a full remake would’ve been nice. There was a port of Space Manbow to Japanese mobile phones, and it’s also available on the Japanese Wii Virtual Console.