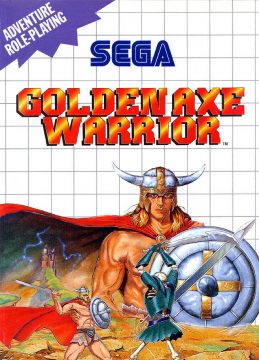 Golden Axe Warrior is a shockingly blatant clone of the original The Legend of Zelda. The graphics are all extremely similar, although the expanded color palette makes for a slightly better looking game. You’ll fight similar monsters, enter familiar dungeons, and solve the same types of puzzles. There are minor tweaks here and there, of course. There are 10 dungeons in total, and the first five must be completed before the second half of the map is opened up, allowing access to the remaining five. 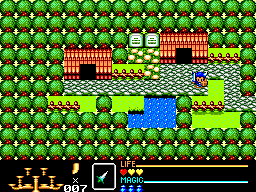 The status screen is brought up with Button 2, with attacking mapped to Button 1. This is annoying, since you need to interrupt play to switch to a secondary weapon, but it’s preferable to hitting the Pause Button on the SMS console itself. You also no longer shoot laser blades at full health – perhaps that would have been going too far. The music is similar in nature, and quite catchy, although not quite as heroically endearing. 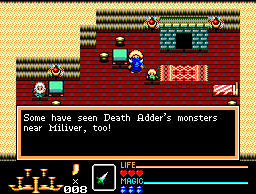 There are now multiple save points hidden around the overworld, in addition to actual towns, inns, shops, and people to talk to, which is a nice step up from the crazy hermits in Zelda. There’s a separate magic meter, so spells and other special attacks won’t drain your money. Perhaps most importantly, you also have an axe with a wider attack range than your sword, which can chop down trees – much better than using a candle to slowly burn everything in sight. This really could be like an alternate Zelda II that adhered closer to the original. 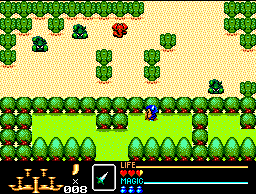 Just like the subsequent Ax Battler, there’s very little to tie this with the Golden Axe series. You play as some generic little warrior who looks like a beefy dude on the title screen, but more closely resembles the protagonist from Dragon Quest. You’ll run into familiar faces in a few spots, like Gilius Thunderhead (misspelled here as “Gillian“), who grants you his thunder magic if you give up a certain item. These events feature the classic Golden Axe theme, which is a nice touch. But other than the appearance of a handful of familiar enemies, like some of the Bizarrians and those huge bald guys who were prevalent in the original Golden Axe, these connections are very loose. 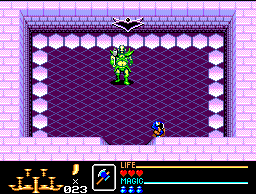 Still, it ranks next to Power Strike II and Ninja Gaiden as one of the best later SMS releases – like these, it only received a retail release in PAL territories, with limited release in North America – and it’s worth checking out despite its shamelessness. The game is unlockable on Sonic’s Ultimate Genesis Collection. 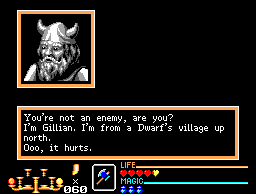