Golden Axe II was developed solely for the Genesis, bypassing any arcade release. It’s perhaps a bit too much like the original in practically all aspects. Gilius, Tyris and Ax Battler are back this time around, to defeat the evil Dark Guld. The sprites are new, with Tyris getting a revamped, slightly less revealing outfit, and some of the spell effects have been modified too. Most of the enemies are the same, though, with a few additions and changes. 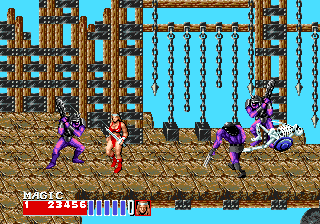 Some of the new enemies are lizardmen, headless knights, and other man-beasts. The little thieves have been changed into midget wizards, who drop spell books instead of magic potions. The backgrounds aren’t quite as interesting as in the first game, mostly castles and dungeons and such, though the hall where you fight Dark Guld is rather cool looking. However, in general, the visuals have improved a bit over the Genesis port of the original Golden Axe. 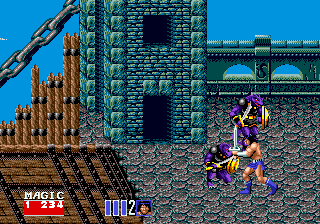 The movement and combos are similar to the original, though they feel a little quicker. The magic works slightly differently too. Instead of just blowing all your spell books to cast whatever level of magic they equate to, you hold down the magic button. How long you hold it down determines how much power you use up and therefore the level of the spell which is activated.  The difficulty is quite easy compared to the first arcade game; if you put this game on hard, it approximately matches up to the previous arcade release on easy mode. 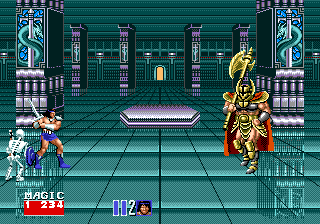 The music is composed by Naofumi Hataya, who later went on to more lighthearted fare with Sonic the Hedgehog 3 and Nights: Into Dreams. “Ravaged City“, the first level track, is fantastic, and in general the soundtrack is catchier than the original. On the other hand, the track “Enemy Headquarters” sounds too much like a Sonic the Hedgehog song. The awesome digitized screams are no longer as cool, as most enemies perish with the same pitiful “Ugh!“. 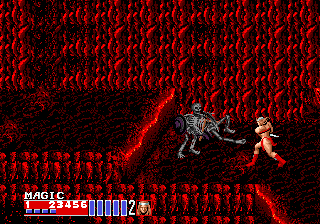 Overall, Golden Axe II is a decent game, but it feels uninspired and ultimately rather redundant. Some new playable characters, or at least some new Bizarrians, would’ve made this a more worthwhile endeavor. 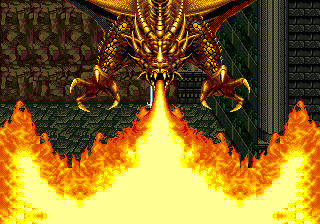