Xtalsoft (pronounced “Crystalsoft”) developed a number of RPGs for computer platforms, including Lizard and the Mugen no Shinzou series, the latter of which was noted as being extremely influential on the Dragon Quest franchise. One of their earlier titles, Aspic, was ported to the Famicom Disk System by Bothtec, but they later chose to create their own console-specific game called Kalin no Tsurugi (“Sword of Kalin”). Conversely, the influence of Dragon Quest can be seen right on the first screen, which looks almost identical to the opening area of that game. The general graphic style is extremely similar, too – the castle bricks, the landscape, everything. 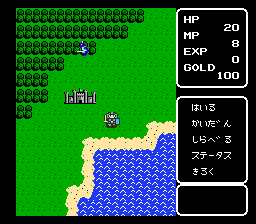 The action-based battle system is where they differ, however. Visible monsters wander around the overworld, and if you run into them, you’ll enter into a separate screen to do battle with them. The combat works much like Hydlide and other similar early action-RPGs – in order to attack them with your sword, you need to bump into them, causing you to exchange blows. It’s better to hit from the side or behind, but ultimately it’s almost impossible to escape without getting damaged yourself. Thankfully, one of the first items you get is a magic rod, which allows you to attack from a distance. This consumes MP, so you can’t rely on it all the time, but it does regenerate slowly.

The biggest issue here is that there’s no way to tell how many enemies you’ll actually face until you get into combat, and there’s no way to escape, either. If you only have to fight one or two, you’ll probably be fine. If you have to fight a whole horde of them, unless you’re properly leveled up, you’re probably screwed. Thankfully, the game boasts a quick-save function, which you can use at any time, and these saves are automatically reloaded every time you die. It’s essential to use this after every battle – health is only generally restored by staying at inns or using health potions, so you’ll be teetering on the brink of death an awful lot, at least until you’ve reached the appropriate level. 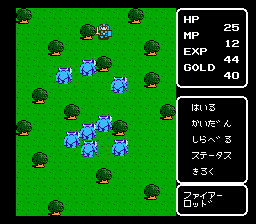 Otherwise, Kalin no Tsurugi is fairly simple. The story is typical, as you control a knight with the task of saving the kingdom of Altenia from the evil mage Gladrif and his army of monsters. As with the original Dragon Quest, there’s not much to do other than explore, beat enemies, grind levels and gold, buy more equipment, and then proceed. The game world isn’t terribly large either – again, comparable to the first Dragon Quest – and it feels pretty basic even compared to other FDS action-RPGs like Silviana or Dandy. 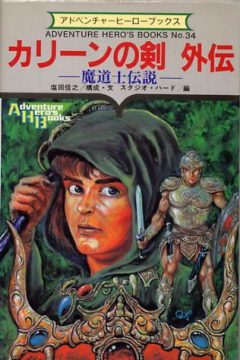 While Kalin no Tsurugi was not particularly popular, it was the subject of Choose Your Own Adventure-style game book. The illustrations were provided by Ryusuke Mita, who, in addition to supplying art for other similar books, later went on to create the goofy fantasy-themed manga Dragon Half.

This review is from The Complete Guide to the Famicom Disk System. Please check it out if you want to read about more obscure RPGs and numerous other Japan-only games!