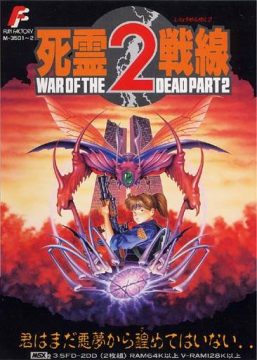 According to some sources War of the Dead 2 was first released on the MSX2, in 1988. Which would put it a year before the PC-88 and PC Engine ports of its predecessor. The WotD2 port to PC-88 meanwhile came later in 1989. Given the nature of the developer and hardware, plus lack of information on the title screens, accurate information is difficult to come by. It’s set some years after the incident in the first game (where Lila managed to avert a portal into hell consuming the whole world), and terrorists have targeted the industrial city of Sun Dorado.

The recently completed Keel Nuclear Power Plant has been taken over, and S-SWAT are tasked with handling the situation. Except as Lila (now promoted to Lieutenant) points out in the intro, why send in the Supernatural SWAT squad to deal with common terrorists? As the Chief reveals, they’ve found strange creatures in sewers – creatures not of this world, but from Hades (the other dimension in the first game), meaning whoever was behind the previous crisis is behind this one. What survivors remain are barricading themselves indoors. The city has been cordoned off and Lila is the prime candidate for the mission. So off she sets, with four fellow S-SWAT members, to regain control.

This sequel has undergone radical changes from the original, with all of the RPG trappings stripped out. There’s no longer any kind of stats, menu system to navigate, day/night cycle, overworld map, or weapon recovery items. In fact the only items are drugs, which restore health to maximum and only one can be carried at a time, and key items with further the story. The biggest (and arguably best) change is the combat: there are no longer any random battles. Taking place on a series of massively sprawling maps, as opposed to shrunken JRPG-style maps which warp you to new maps when entering buildings, all enemies can be seen immediately. Furthermore you never fight more than a single enemy at a time. If there’s something hostile in a new area, you can see his health bar at the bottom.

In a lot of ways it closely resembles the original Metal Gear, except more sedate and with greater emphasis on NPC dialogue. One especially nice touch though is that you meet Carrie from the previous game – she’s now a journalist reporting on events, and shows up to speak with you and reveal clues. There’s only one gun throughout, with a single ammunition upgrade about halfway which increases your power. Otherwise ammunition itself is infinite and enemies, restricted to a maximum of one per room, take the form of very easy minibosses. Defeating certain larger enemies results in a permanent health bar increase, much like rescuing POWs did in Metal Gear.

There aren’t really any puzzles, with progress based on exploration and generally going with the flow of directions. You’ll get radio messages from survivors who point you to specific buildings, defeat bosses to gain entry, and retrieve items which allow progress. None of these are easy to miss, and key things like the dynamite, medicine and bottle of gin are quickly gained simply by talking to people. Sometimes, in the case of the bridge key, you’ll need to traipse back and forth several times in a single area: first to the mayor’s assistant, then the gate attendant, fight a boss in his house, back to the attendant, back to his house, to the gate control room, and then you can progress.

We’ve not included any character profiles, since unlike the previous game there are no character portraits and, furthermore, no one besides Lila is of any great importance. Although you’ll meet-up and talk with fellow S-SWAT members, help two bumbling police officers, rescue the mayor’s daughter, take out terrorists, meet a radio DJ, and save nuclear power plant workers, none of them exist other than to facilitate your next goal. The police in particular appear especially stupid, since you meet them standing in an empty yard, whereupon they only show up again to take credit for your actions.

The above text, describing a mixture of easy boss fights and basic lock-and-key progress, probably sounds negative. But I want to emphasize that it shouldn’t be taken that way – WotD2 succeeds even more than the first game in creating an incredible sense of atmosphere. It’s more like a book or a film where you need to go through the motions of events. You have direct control over everything, unlike an FMV game, but there’s little room for variation as the game shuttles you from one awesome set-piece to another – and it does a tremendous job with this. War of the Dead 2 is like an amalgamation of all your favorite 1980s action/horror/sci-fi movies, especially all of those by John Carpenter (The Thing, They Live, Prince of Darkness), wrapped up in a shell resembling Metal Gear.

Although the fan-translation obviously had to lose some of the text, there’s still suspense as the intriguing plot is reveal in snippets. As it turns out the entire crisis has been orchestrated by a disfigured brother and sister who have psychic powers like Lila – the brother describing her as a gatekeeper like himself. Now head of a strange religious cult, it’s revealed the siblings’ mother took her life 11 years ago, and shortly thereafter the brother killed the father. Along the way you explore the city slums and end up at their house, which results in a rather sticky situation. A good word to summarize the adventure would be diversity, since the game constantly throws new situations and areas at you, helping to dismiss concerns about lack of mechanical depth or character backgrounds.

The Japanese term for a game which is more about atmosphere than play mechanics is “funiki”, and it’s certainly applicable here. The pacing is fast, the combat simple but inoffensive, and progression more akin to a graphic adventure without puzzles, but everything it throws at you manages to remain exciting and drenched in atmosphere. Moments such as discovering the secret path behind the mayor’s house, getting jailed, preventing a nuclear meltdown, donning night-vision goggles, exploring an abandoned subway, or closing a gateway to the bowels of hell, are all things which will linger in the mind.

War of the Dead 2 might not appeal to modern gamers, but for those who can appreciate older titles, it’s one hell of an adventure.

The two games are absolutely identical in terms of design. The only slight differences are cosmetic and the result of hardware variation. The PC-88 game uses less colors than the MSX2 but has a higher resolution, which results in a wider field of vision, as highlighted by the cooling towers image below. Even so, by mixing pixels of disparate color the PC-88 is able to achieve an equivalent hue – shrinking the PC-88 screens down in size using anti-aliasing makes them difficult to tell apart. The PC-88 version also benefits from a much better soundtrack. The music has heavier bass and synth sounds to it, making it sound like an old John Carpenter film – which only enhances the horror movie atmosphere. This zip file contains a music file from the first game on PC Engine and second game on PC-88 (boss track).

One other difference, caused by the hardware, is that the MSX2 game has speed issues. This isn’t the result of badly optimised emulation though. Bullets travel at a much slower speed on the MSX2, to the point you can fire and then run after the bullet, and it will appear to be stuck to your head. On PC-88 projectiles move with greater speed. Clearly the MSX2 was being pushed hard with WotD 2, and the unfortunate side effect is that movement and battles are much more lethargic. A frame-skip button will help with movement speed if you’re emulating, but you should accept that combat will be a little more drawn out. Of course, since only the MSX2 game is in English, it is still the definitive version.

Thanks to MSX translation group Oasis, War of the Dead 2 has been available in English since 1997. You can download pre-patched MSX2 disks from Generation MSX, which run fine on BlueMSX (those with a modded Xbox are encouraged to get an MSX emulator for that, since it’s great on an SD TV). It’s about 98% translated, with only a handful of Japanese dialogue boxes left incomplete.

Regardless of its design flaws and slow pace, WotD2 is an excellent adventure, and an essential title for retro fans. It can be completed in a weekend and there aren’t any sticking points, but just in case you do get stuck, there’s a comprehensive map here. To load a save file in either version, hit F1. The other controls are the arrow keys, fire and inventory.