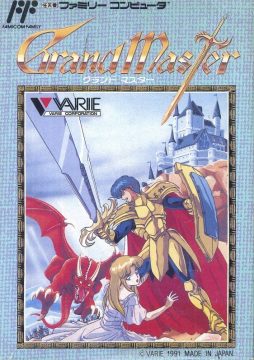 Grand Master is a virtually unknown and underappreciated action-RPG for the Famicom. It was developed by Soft Machine and published by Varie in Japan and never saw an official English release. It features a Western fantasy theme, and while the story might be cliché, it was told through multiple story branches the player can discover which was a very forward thinking idea at the time. The gameplay is pretty solid as well and almost feels like an NES version of Link to the Past. But perhaps due to the obscure nature of the developer/publisher and the advent of the SNES, the game was pretty much forgotten and as such it has remained an obscure Japanese gem. 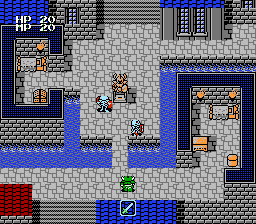 One of the things that stands out immediately is the opening intro. If you were only to look at the story during the intro, you’d see a generic scene with a knight, princess and bad guy. Who cares, right? But the story in itself is not everything. How a story is told is just as important if not more and can really make or break the whole experience. Featuring a series of unique anime-styled cutscenes complete with slick transitions and catchy music/sound, the intro is quite striking and sets the tone nicely for this gem of a game.

The story itself is really nothing special and features fantasy plot with cliché characters.

Rody became a swordsman at 15 and enlisted as a bodyguard to the royal family at 18. After just four years, he not only had the strength to become commander of the bodyguards, but he was a decent young lad who maintained a kind disposition and a sense of justice, and he was trusted by everyone. However, as with all the young soldiers in the kingdom, Princess Serene was still far out of Rody’s reach. Ironically, the day Rody finally became aware of his feelings for her was the day Dante the Demon King was resurrected.

The big, bad, ancient evil villain from the past who was mysteriously resurrected and is now bent on world domination.

The sole female descendant of the royal family’s bloodline, she is said to be the most beautiful woman on the continent of Austral. As a child she was attacked by wolves, and a boy protected her despite sustaining serious injuries. The boy’s name was Roddie, and she secretly has feelings for him. But now she has been kidnapped by Dante the Demon King, and Roddie must once again risk his life to save her. All she can do is pray that they will be reunited.

Terry is a well regarded knight-in-arms from a neighboring country that no longer exists thanks to Dante. He’s on a quest for revenge and redemption to stop Dante and remove Dante’s curse from his younger sister.

When she was young, her innate talents were recognized and she was appointed as a priestess to the Kingdom of Xan. While en route to Xan with her elder brother, the two were attacked by barbarians and separated from eachother. Her brother was able to reach Xan despite suffering serious injuries, but Freya’s whereabouts are still unknown.

Roddie’s older sister. She was studying under Archmage Bideau, but currently her whereabouts are unknown. Rumor has it that she fell into the clutches of the Demon King and is being used to control demons. However, Rody does not believe this. Her speciality is fire magic. 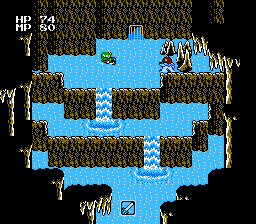 The story’s not entirely unoriginal, but its main strength comes from how it is presented much like the intro and more. It is told through a series of anime-style cutscenes usually after each stage, but what scenes you see are based on which branching paths you are on. The way the branching works is based on the order in which you clear the five stages. If you do not trigger the proper scene in one of the stages, when you get to the final stage, the game will end prematurely and you will receive the “bad” ending. The game will automatically select the right stages for you, so getting the good ending is not very hard. There are also a number of death scenes complete with a pinch of blood that can or cannot be triggered which are actually kind of interesting and cool to see from a game of this era. Together with anime-style cutscenes, the multiple branching paths and the high mortality rate among the characters, Grand Master is actually pretty cool.

The game itself plays from a top-down perspective, a bit like The Legend of Zelda, but with some extra RPG elements added in. It features a basic leveling system that maxes out at 10 and basic HP and MP stats that increase by 10 each level up until they reach 99. The stages are also in the same vein as The Legend of Zelda in regards to the dungeons, albeit in a much simpler form. Instead of an overworld, you instead pick from five stages on a world map and each stage follows the same basic formula that consists of finding the key to open the door to the boss. Each stage contains various enemies that respawn, the occasional warp point, and a handful of chests that contain a new weapon, accessory and healing items. The final stage also follows the same pattern, but it’s about five stages combined into one and borders on torture/redundancy with a series of mazes and long passageways that take forever to pass. It is at odds with the first five stages. 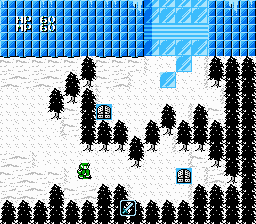 The game starts out somewhat challenging but as you gains levels and acquire new items, the difficulty becomes increasingly easy and enemies pose less and less of a problem. The bossess are effected most by this especially when the Rod is acquired, which with a high enough level, bossess can be killed in a matter of seconds with it. Even the final boss Dante is a cakewalk. However, there is additional and possibly unused text that says that Dante is protected by a magic barrier which renders magic ineffective. That would’ve solved the Rod issue, but it doesn’t appear possible to trigger this branching scenario in the game.

There’s a small arsenal of items and weapons to use. The default weapon is a sword, whose slash animation is reminiscent of Link’s slash in Link to the Past. The axe is like a throwing tomahawk, and the rod creates a proximity blast around Rody to devastate enemies. The morning star is useful for attacking from a long range, but also functions identically to the hookshot from Link to the Past, allowing you to cross small gaps. The armor raises your defense; the shield automatically blocks attacks from the front. Assorted other items increase your weapon speed, make you walk faster on certain terrain like deep snow, or decrease MP consumption. 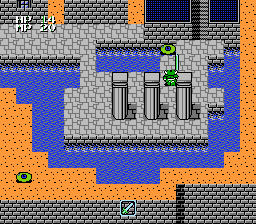 Aside from the story, one of the cooler aspects of the game is the uniqueness of each stage. Everything from stage design and graphics, enemy sprites and music are unique and nicely detailed giving the game a certain amount of freshness for a fun experience. Although admittedly the final stage is a little redundant. The themes for the stages range from a castle, pyramid, cave, tower, ice temple and a giant castle in space. Aside from a few basic tiles, the majority of the graphics don’t appear to be recycled between stages and are nicely detailed. You can expect to find people frozen in ice, people turned to stone, a wall with a special engraving and nicely animated waterfalls. Each stage also comes complete with their own environmental factors.

There are common spikes that poke and prod you, waterfalls you can slide down and swim up, snow you trudge through and ice you slip and slide on and lastly areas where gravity is compromised and one wrong step can send flying out into space. All the stages more or less feature a common enemy type, but each stage has its own unique variation complete with a detailed sprite, and nicely animated movements and death. For example, your typical slime is a will o’ wisp in one stage and an ice cube in another! Did you ever want to know what happens when you slam a zombie with a broadsword? This game answers all your burning questions and more. Even Rody’s sprite is different for each stage. On the ice temple, he’s all bundled up and on the pyramid he’s wearing predictably less. It’s even possible for Rody to get turned into a cat on one stage. Even the music is not half bad with some entertaining tunes that fit each stage nicely. When you combine all this together, it makes for a solid gaming experience. 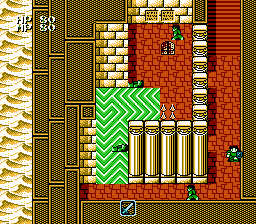 The game does seem somewhat unfinished though. There are a few minor and insignificant glitches, but the most revealing thing is the presence of a fatal bug. There’s a particular area in the final stage that if you fall off a edge into a pit, the game will crash on you. Under normal circumstances, you’ll just lose some HP and have your position reset, but not this particular instance. The ending also lacks those cool cutscenes present throughout the game and instead just features a simple scene of Rody and Siren embracing each other and Siren has strawberry-colored hair instead of the golden locks. Very odd.

Despite being in Japanese, the game is still entirely playable for those lacking the language skills. The only real thing you’d be missing out on is the story, which is one of the cooler aspects of the game. Luckily, there is a fantastic fan translation patch available to those who wish to experience the scenario. 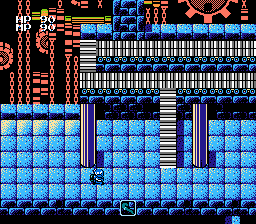 Grand Master may not be amazing, but it does have a few things going for it that separate it from other games in that era. The game is easy to the point of being unbalanced and that final stage is just torture, but all the branching anime-style cutscenes and the nicely detailed stages more than make up for those flaws. Perhaps with a little extra tweaking and polish, the game could’ve been something really special.