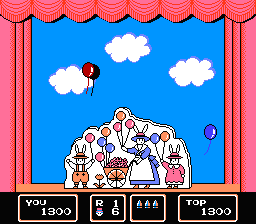 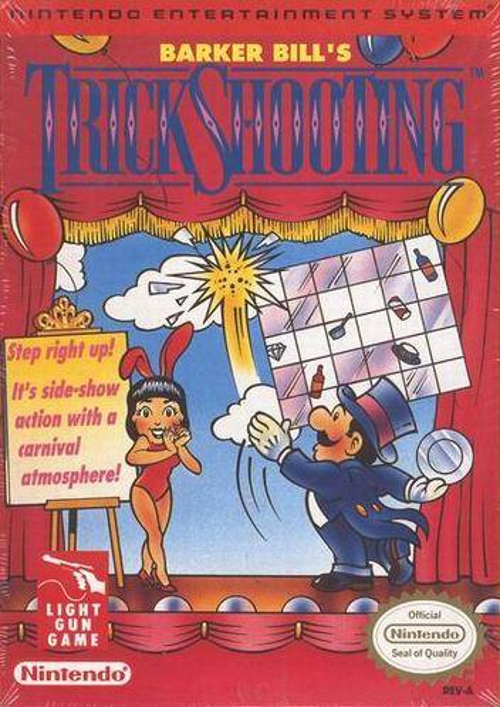 From 1985 to part of the early ‘90s, the Nintendo Entertainment System (NES) was an unstoppable juggernaut. A hit with kids and adults in most parts of the world, it proved to be a perfect opportunity for game developers eager to cash in on the popularity of movies, TV shows, and superhero comics of the era. Everything from RoboCop to Wheel of Fortune saw at least one release on the NES. By 1990, licensed games were in good plenty, leading some developers to draw from deeper wells of nostalgia.

One such example is Barker Bill’s Trick Shooting. Developed by Nintendo R&D1, the game was based on a long-defunct ‘50s animated series called Barker Bill’s Cartoon Show – one of the earliest pioneers of weekday cartoon programming. Barker Bill was a mustachioed circus ringmaster whose picture (with an accompanying voiceover) was used for introducing the next cartoon in each episode. Nintendo making a game based on such an old property seems slightly odd. The game itself doesn’t feature any characters that kids would have been familiar with at that time. The demographic most likely to have recognized Bark Bill would have been middle-aged adults, which was hardly the target audience that Nintendo was aiming for at the time. Even so, there are some delightful design elements at work here that make the game fun to play- recognizable cartoon characters or not.

Designed for use with the Zapper light gun, Barker Bill’s Trick Shooting is a whimsical shooting gallery game. The player can choose from four mini-games- Balloon Saloon, Flying Saucers, Window Pains, and Fun Follies. Each game starts you with ten credits that decrease each time you miss a target. You can also gain credits (up to 99) by shooting diamonds that occasionally appear- a smart design choice since most other NES light gun games that use a hit/miss system don’t usually provide a way for you to redeem yourself. 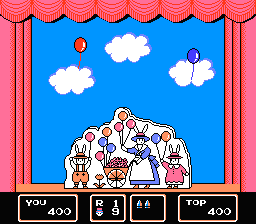 In Balloon Saloon, the dog from Duck Hunt hides behind the scenery and sends balloons floating upward, and your goal is to shoot each balloon. They move at different intervals and can be tricky to hit depending on their angle and speed. After the first round, the dog will sometimes pop its head out from the background. If you shoot him, this will count as a “miss” and deduct from your credits. As you can probably guess, the dog will do his best to get in the way in each subsequent round.

In the Flying Saucers game, Barker Bill and his assistant Trixie toss small saucer plates in the air. The player must shoot the saucers before they hit the ground. Each round consists of a total of twenty saucers in groups of two. You can score a maximum of 500 points for each saucer, depending on the height when shot. The lower to the ground, the higher the score awarded. Hitting two overlapping saucers at once nets you 1,000 points. They’re relatively easy to hit when thrown toward the upper center of the screen. However, It can be a bit more challenging to shoot the saucers tossed closer to the extreme left or right portions of the screen since they tend to be thrown at a greater velocity and go off-screen instead of arcing downward. Making things even riskier is the green parrot that erratically flies around and catches some of the saucers, forcing you to shoot it from the bird’s grip before it flies off-screen. And, of course, misfiring and hitting the bird will cost you a credit. The same goes for accidentally shooting Barker Bill or Trixie. 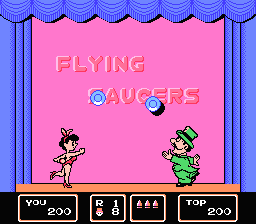 The Window Pains mode requires the player to shoot a series of objects that fall behind window panes. However, some windows have glass that obscures your ability to shoot the items that fall behind them. So you have to hit each object before it’s too late. As you advance to later rounds, the window patterns change, and items begin to fall from multiple windows simultaneously, requiring quick reflexes and prioritization. It’s one of the more challenging of the first three mini-games.

The final mode, Fun Follies, is a mixture of the previous three galleries that alternate between rounds. Included in this mode are two additional mini-games 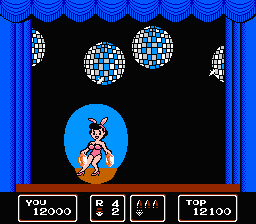 – Trixie’s Shot and Bill’s Thrill. The former has a particularly impressive presentation. In this mode, Trixie dances across the stage and performs various poses with coins in her hands, the goal being to shoot the coins. Again, the parrot shows up to steal the golden currency, further complicating matters. The challenge is that the coins are tiny by comparison to the targets in the other mini-games, therefore increasing the risk of accidentally shooting the bird or Trixie herself. Still, it’s one of the best implementations of the Zapper light gun.

Bill’s Thrill is the most comical mini-game involving the title character and his assistant. In this game, Bill tosses different items into the air, and you’ll need to shoot them on the way down before they fall on Trixie’s head. This is the most difficult of the mini-games since the object in question often descends quickly, leaving the player with a short time to react. Therefore, it’s imperative to listen for the audible cue of the decline in altitude to be prepared to pull the trigger. Failing to shoot it time will incur Trixie’s wrath.

Interestingly, the diamonds in Fun Follies function a bit differently than in the other modes. While you can still shoot them during several rounds, you can only collect up to three, and they do not immediately increase your credits. Instead, they are used in the bonus round that allows you to try and get multiple credits by playing a slot machine game similar to the one found in Super Mario Bros. 2. Any diamonds gained by this point will increase your chances of lining up multiple horizontal matches. If you’ve maxed out your diamond allotment, this can result in a nice payday of credits if you manage to match every row.

The graphics are nicely done and fit well with the sideshow theme of the game. The character and animations are well detailed and made excellent use of the hardware capabilities of the NES. The game features enough variety to keep things compelling enough to keep playing, so long as you don’t get frustrated with the more challenging gameplay aspects. The Trixie’s Shot mini-game is especially impressive with the spotlight that follows Trixie around on stage while disco balls shimmer to the music. Such design choices worked well for the game and gave it a unique personality- something Nintendo often excels at doing. 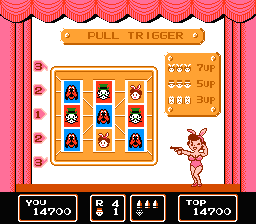 The audio quality is equal to the other commendable aspects of the game. Much like the graphics, the music is also in line with something you might associate with carnival games. Most of the tunes have a calm melody to accompany the several minutes it might take to finish each round. The sound effects are pretty much the usual of what you’d expect to hear in a Zapper game. Nothing is out of place or jarring to the experience.

Barker Bill’s Trick Shooting is a real gem thanks to the whimsical charm and high production value that went into its visual presentation. If you love light gun games and have a TV compatible with the Zapper peripheral, then hunting down this game is worth the effort. It stands as a fascinating precursor to later games like Namco’s Point Blank series.

Legend of the Ghost Lion