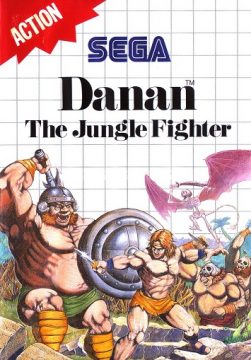 Though Sega’s Master System only seized a small fraction of the Japanese and North American markets, it did very well in Europe and Brazil, where Sega (along with several European third-parties) continued releasing titles for it years into the Genesis’ life. Many of those titles were actually contracted out to various companies rather than developed internally, as Sega’s core teams focused on its 16-bit system and successful arcade business. Evidence suggests that Danan: The Jungle Fighter was made by Whiteboard / Santos, mostly known up to that point for mahjong games and ports of arcade titles to various consoles. Shortly after Danan‘s release in 1991, Sega bought the company, renamed it Megasoft, and put it to work on Shinobi 3 under Noriyoshi Obah’s supervision before fully absorbing it into its R&D departments. 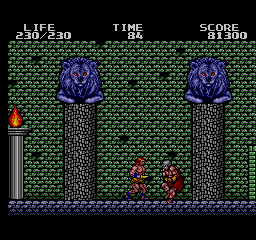 It essentially follows the formula established by Wonderboy in Monsterland, inserting adventure / RPG elements into a traditional arcade-style side-scroller, with separate levels and a timer forcing you to keep up the pace. Unlike Wonderboy’s brightly-colored cartoon world, Danan goes for a Westernized aesthetic, with realistically-proportioned characters and muted colors. It’s not pretty, particularly the main character’s sprite or the handful of portraits that pop up during conversations, but it does manage to set a different tone. There is also a greater focus on the storyline.

It begins when Danan’s adoptive father, Jimba, is murdered. As he lays dying, he instructs Danan to seek the prophet Niai. From the prophet, he learns that Jimba’s death is connected to an ancient legend, that of the hero Aganan, who vanquished an evil being with the help of three magical artifacts. What begins as a standard fantasy tale becomes a bit more interesting with the appearance of Linda, a young woman in modern clothes who becomes a recurring character, and of the real enemy, a fascistic army whose steel ship has recently landed near Danan’s jungles. It may all be very cliched (though maybe not quite as much back in 1991), but the speed and conciseness with which it’s told is impressive; it feels like going through every plot beat in a standard Japanese RPG in less than an hour. 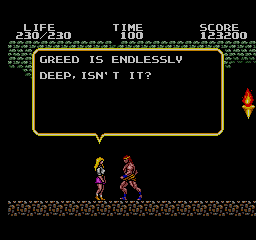 And so are you, Linda.

Danan himself is half-Tarzan, half-Conan (or Ax Battler), a muscular, bare-chested jungle barbarian with enough nerves to take on an ancient demon and an evil empire armed with only a small knife. As one might expect, the short blade makes for a limited attack range, though the generous hit detection compensates for it in most cases. A few enemy types can still be cheap and annoying to deal with, particularly early on. Danan’s walking speed is pleasantly fast, and he can jump pretty far, making the short platforming segments easy enough to execute. He can also call on animals to help him by using icons found in treasure chests. There’s an armadillo that curls into a ball and attacks your enemies, an eagle that can carry you through the air and a monkey that heals you. It’s a nice little gimmick in theory, but aside from the healing, it’s not particularly useful, especially since you can’t use it during boss battles. 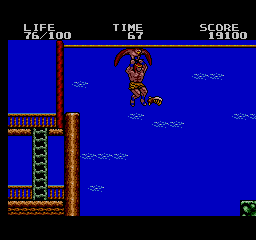 You don’t actually need the eagle, there or anywhere.

Despite the timer pressing you forward, it’s important to explore the levels thoroughly. There is plenty of treasure to be found, from equipment and items that raise your level to elixirs that revive you once or clock icons that give you additional time to finish the stage. Your stats max out at Level 11, after which there is less of an incentive to explore, though you should be nearing the end of the game by then. It’s worth noting that though you only have one life, the game is on the easy side. The greatest challenge is getting started, as you begin with very little HP; by the time you finish the first level, you’re strong enough to take on whatever the game throws at you. It’s also rather short, divided into just four relatively expansive levels, starting in the Amazonian jungle before heading into an hostile village, the enemy ship and finally some ancient ruins. To get to the ship, you have to swim underwater for a while, stabbing fish and turtles like a murderous Jacques Cousteau. 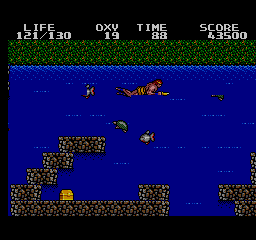 Danan’s gonna have to cut a fish.

There’s also a puzzling episode right at the beginning. As you enter a house, you meet a man who gives you some directions, and tells you to choose between two paths. If you try to choose the second, he tells you you aren’t ready, and asks you again. Insist, and you’re taken to a series of falling platforms above water, which eventually lead… back to his house, where he forces you back on the first path. There is no point whatsoever to this, leading one to wonder whether it was planned to lead into some content that was never realized, or whether it’s just some strange joke. 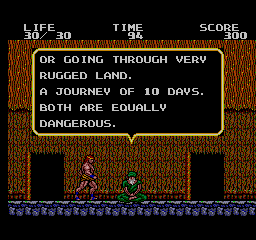 Is he trolling you?

Apart from a decent but short title screen theme, the music is mostly quite forgettable, with a theme or two bordering on annoying.

Like most interesting Master System games, Danan is pretty rough around the edges, and many contemporary reviewers held its short length against it. It’s true that the concept could have stood to be expanded upon, but in an age of bloated, time-consuming games, this arcade-like directness and brevity has become refreshing. 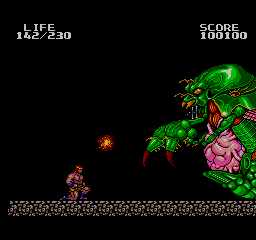 GDRI – Information about Whiteboard and various other contractors.

Segaretro – Has scans of the Danan manual.