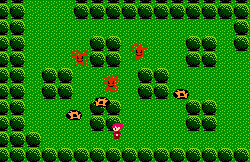 The popularity of The Legend of Zelda marked the Famicom Disk System as the platform for action-RPGs, but none of them is as much of a blatant clone as Imagineer’s Seiken Psycho Calibur. (“Seiken”, one of the most popular words in Japanese video game titles, means “holy sword”). It has a fairly generic plot, as you control a hero aiming to save the land of Earth Maral from demonic forces using a special sword. 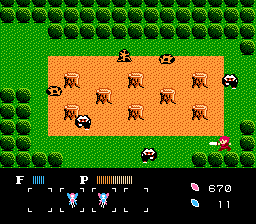 The fundamentals are extremely similar to Zelda, right down to the controls, visual style, and weapons (with arrows, bombs, and boomerangs as secondary weapons). Even the cave-dwelling hermits, dispensing wisdom or selling items, are basically identical. There are a handful of changes, though – rather than one continuous overworld, there are several areas. These are linked in a linear fashion, and usually consist of a few maps each. If you miss important items, though, you’ll need to backtrack to earlier areas to find them. There are still fairies in this game, too, but rather than simply healing your character, they join your adventure and can be used for various magical effects. There are two types of seeds dropped by enemies, as well. The red seeds act as food, which is automatically consumed as time goes on, encouraging you to move forward and kill enemies to replenish your supply. The blue seeds are essentially just currency. In contrast, the adventure starts out in a town, where you have limited money and can purchase a selection of items. The odd thing is that once you leave this village, you can never return, so picking the proper items can make the early steps of your journey much easier.

The game is somewhat harder than the original Zelda, owing to the more complicated maps and many hidden shops. However, it’s not drastically more obtuse than other adventure-RPGs from the era. It’s completely missing the enduring charm that made Zelda so memorable, though. The hero is bland, the enemies are generic, and the music is completely forgettable. There are worse games, but this was clearly meant to be a holdover until the next high-quality Nintendo title arrived. 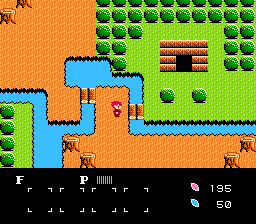 Seiken Psycho Calibur is the last of the three games in Imagineer’s Wave Jack series, which included a bunch of goodies in fancy packaging along with the disk. For this game, the bonuses included a notebook, some maps, and a cassette tape, which had songs that contain some important clues, sung by a group called Poppins. The cover art is by Kamen Rider Black RX monster designer Keita Amemiya.