Nearly ten years after the original, Treasure released Bangai-O Spirits for the Nintendo DS. Like most of Treasure’s previous sequels, it’s not an exact continuation of the original game, but rather, an evolution of the game mechanics and level design, resulting in a game that plays similarly, yet is still remarkably different.

The first seventeen levels consist of a tutorial, where a crazy professor teaches two disinterested kids about the mechanics of Bangai-O Spirits. A lot has changed since the original, especially when it comes to weapon choice. At the beginning of each stage, you get to pick from two weapons. In addition to the Homing and Bound (reflecting) weapons found in the original game, you can also choose from the Break shot (which can penetrate through most enemy fire rather than simply blocking it), or the Napalm shot (which explodes on contact and causes huge amounts of damage.) You no longer need to switch between weapon modes, as X and B are assigned to your two weapons. You can also combine both properties into a single weapon, which is probably what you’ll be using most of the time. There are also a couple of other non-combinable weapons, including a sword for melee attacks, a baseball bat for whacking enemies and/or projectiles across the screen, and an invincible shield to absorb enemy fire. 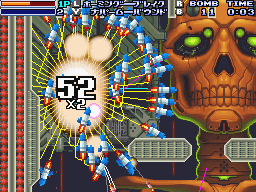 Similarly, there are a variety of EX super attacks instead of the single one from the first game. These include Homing, Bound, Break and Napalm shots like the regular weapons, but there’s also the Direct shot, which will directly target any enemies around you, allowing for a quicker, more concentrated shot. Like the standard weapons, you can also combine these attacks into a more powerful EX attack. There are also two other EX weapons that cannot be combined – Reflect, which will automatically turn all enemy missiles against them, and Freeze, which will temporarily stop time.

Some of the mechanics have been borrowed from the N64 version of Bangai-O rather than the Dreamcast version. For instance, you need to charge up your super shots for a few seconds for maximum strength, and your power meter is charged by gathering fruit rather than destroying objects. But now, you can also aim your super shots and choose to focus them in a single direction. Additionally, the programmers must’ve discovered that having 400 missiles on the screen would cause the DS to slowdown a bit too much. Instead, you can only shoot out at maximum of 100 missiles, but now they can double or triple the size and strength of standard shots, again based on the proximity of enemy projectiles. However, certain enemies can reflect your own shots back at you – but you can also take those and reflect them back, essentially creating a gigantic back-and-forth volley of tremendously huge warheads. The slowdown here is perhaps even worse than the N64 version, with the largest explosions freezing the DS for whole seconds and causing the whole screen to flicker, but it’s still just as impressive as the original game. 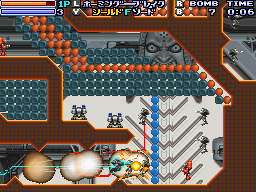 The multi-directional firing is unfortunately gone, but the revamped controls work surprisingly well. If you begin firing and then move, you’ll continue to attack in free mode, where you’ll shoot in the direction you’re moving. In you’re already moving and then hold down the fire button, you’ll lock your shots in the direction, regardless of how you move. If you double-tap the button, you’ll stop dead in your tracks and hover, allowing you to fire in any direction. You can also use the B button to dash, which will tackle enemies and send them flying into other foes, similar to the baseball bat weapon.

There are technically no boss encounters – the goal is simply to destroy all of the targets in a stage. A target can be anything – a house, a turret, an enemy, whatever. There are giant enemies that can sometimes fill the whole screen, but you may find levels that contain several of these, and they may be necessary to destroy the stage. Alas, that means all of the nonsensical exchanges from the boss characters from the original game are gone. So, too, are the talks with the informant. The dialogue in the tutorial stages is actually pretty funny, full of references to anime and video game culture, as well as Treasure itself. 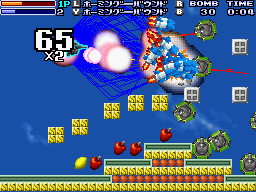 Once the tutorial’s over, the credits roll (one of the tutorial characters remarks that they’re ready to resell the game, mocking the types of gamers who beat new releases as soon as possible just so they can get the maximum trade-in value), and you’re free to begin the game for real. Including these intro stages, there are over 160 levels, a huge step up compared to the 44 of its predecessor. They’re all of greatly different sizes – some take a few minutes to complete, while others can be beaten in mere seconds. In fact, many levels are no more than a single screen. These smaller, more focused stages give Bangai-O Spirits the feel of a puzzle game with action elements, rather than a strict shooter like its predecessor. The sheer amount of variety is incredible – each level usually has a specific solution, and only through multiple attempts can you discover the optimal way for beating them. Some stages are elaborate, claustrophobic mazes, others are closer to the open range levels of the previous game. Some levels focus primarily on offensive tactics, while others require quick defensive counters. The game delights in surrounding you with enemies, leaving you with only a split second to figure out how to escape unscathed. In others, you begin at the bottom of the screen and need to work your way up through a slew of falling obstacles, finding the correct order to blast through them without getting buried in the rubble. One of them sticks you in a maze of explosives and forces you to consider every move, lest you accidentally cause the whole area to go nuclear. Sometimes you need to fiddle with your weapon selection, other times you just need to experiment and figure out some clever way to exploit the rules. 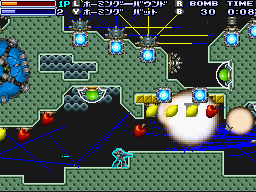 There are a number of levels based off classic video games like Pac-Man and Super Mario Bros., and one is even based on the iconic battleship from the third level of R-Type. The backgrounds range from creepy skeletons to H. R. Giger alien ripoffs to European towers. One level takes place inside of a DS. There’s no real cohesion amongst the visual design, but that accurately reflects the type and variety of stages you’ll encounter.

Some of the stages are pretty obtuse, but the game has a shockingly freeform approach to progression – you can choose any level at any time, so you can skip over the ones you don’t like. The game records your score and time for each stage, allowing you to keep track of the ones you’ve completed, but Bangai-O Spirits isn’t a title you play to “beat” – it’s something you keep to mess around with. 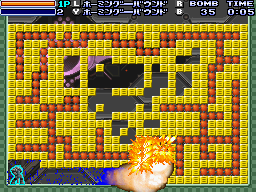 But undoubtedly the coolest feature is the ability to create and transmit your own levels. There’s a fully functional stage editor, even allowing you to pause and alter any level you’re already playing. In order to send levels to other players, the game encodes your stage data in the form of sound data, so you can record it via the line-in on your computer. (It sounds like shrieking, which should be familiar for those who remember modems or old computer games that came on tapes.) Then, in order for other players to receive the data, they play the sound file by sticking the DS microphone next to the computer’s speaker. If all goes well during transmission – and sometimes it doesn’t – then you can save the level to play at any time. Although PC players are used to this level of customization, it’s pretty rare in the console/portable gaming market, and it’s a clever work around for gamers to transmit stuff, since Nintendo lacked the foresight to include a portable media reader on the DS.

Bangai-O Spirits is one of the few games that tries to be a jack of all trades, and actually ends up becoming a master of all. Its schizophrenic nature might not go over well with those that just want a straight up action shooter like the original, but it makes for a much more interesting, more varied, and more thoughtful game, and its bite sized nature make it extraordinarily well suited for portable gaming. 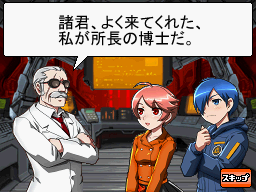 The North American version features eight extra stages, including one that looks like Sabu’s face, one of the characters from the original game. The targets are now highlighted with a bigger crosshairs to make them more noticeable, and there’s a small “victory” scene with the Bangai-O flying towards the screen whenever you win a stage, just like the first game. The stages are also arranged different – the Japanese version simply divided them up into “ROM” and “Custom” stages, while the North American one is sectioned into “Treasure’s Best”, “Puzzle”, “Other” and “Custom”.