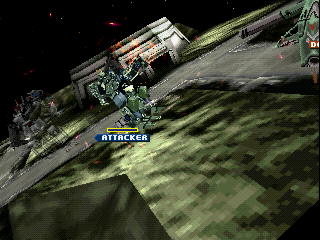 If Masaya saw Front Mission: Gun Hazard as a ripoff of Assault Suits Valken, well, this game, developed by TamTam (who did some other inconsequential Japanese games like Eithea) is them repaying Square the favor. Despite the “2” in the title, this game is really nothing like the original Assault Suits Valken, because it’s actually a whole lot like Front Mission 3. The general concept – a strategy RPG with mechs – in itself isn’t particular uncommon (just see the dozens upon dozens of Super Robot Wars games), but this one borrows quite a bit, including the 3D graphics, the interface (including the menus in English), and even the basic mechanics – the “counterattack” screen, where you can choose to dodge, defend, or counter is ripped almost straight from it, with just a few added options. Each mecha you control has a set number of AP, which determines how many times they can move and/or attack in a given turn. 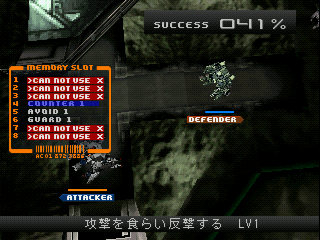 The only major addition is that you need to enter “cockpit” mode – a first person perspective – to target enemies. This is cool at first, because the mechas actually do look pretty good for a PS1 game, but it’s remarkably slow compared to other SRPGs, where you just select who you want to attack, and then attack. In fact, the whole game moves at a snail’s pace. In the first few missions, you only control a single character as you wait for all of your allies to move, then your enemies, then wait for some talking heads to yammer some text for awhile, before resuming. By the fourth mission, you actually get some other pilots, but the whole experience is remarkably sluggish, even after you enable the shortcuts.

The only other thing Valken 2 has going for it is its customization options, which lets you place each of your mechs in “roles” (short range, long range, etc.) similar to the “job” system from Final Fantasy V / Tactics, which then modifies their stats accordingly. Still, it’s nowhere nearly as fun as the customization in the Front Mission games. The only real connection with the rest of the games is that it takes place in the same universe, and a couple of characters make appearances, like Leena, the dispatcher from Target Earth, and Jake, the hero of Cybernator. The character designs are by Yoshikazu Yasuhito, who also did the designs for the original Mobile Suit Gundam.