Back to the past’s future

The next F-Zero was made a launch title again, but this time for Nintendo’s new handheld platform. As the Game Boy Advance’s capabilities are similar to the SNES, it doesn’t surprise that it harkens back to the original game instead of trying to further evolve the series from its 64-bit outing. Even presumed F-Zero inventor Kazunobu Shimizu was brought back to direct the game. The degree of committance to the original concept is a bit surprising, though. It goes without saying that the circuits are flat, Mode 7 scaled surfaces again, but almost every gameplay detail is exactly the same, right down to the exact functionality of the booster and the number of rounds per track. The various obstacles and traps are the same, and even the nominal speeds are back to the comparatively tame dimensions of the early days of the F-Zero league. 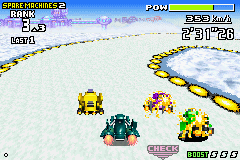 At the same time, Maximum Velocity tries very hard to appear as off-brand as possible. The Pawn League doesn’t start in Mute City, but in Bianca City. With the exception of Fire Field, all the tracks have completely new names while vaguely resembling themes from the former games. All the cars and pilots have also been swapped out, and none of them ever appear in another F-Zero game. Only the Falcon Mk-II suggests any relation to the F-Zero universe, but even then it looks not a whole lot than the regular Blue Falcon. 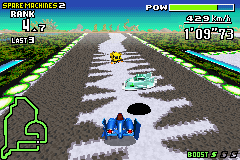 An unfortunate side effect of Maximum Velocity‘s preoccupation to set itself apart aesthetically is the absence of all the classic F-Zero music tunes. The new compositions are still pretty good, but in a much more typical 16-bit racing game sense, never as catchy or unique as the originals. They’re also almost completely drowned out by the monotonous engine noises, especially when playing without headphones.

More of the same, prettier

At least this first portable outing looks a lot better than the eleven years older SNES game. This is achieved predominantly by much higher color count, which allows the roads to have a proper texture and makes for more detailed sideline sceneries. The ships are all prerendered CGI, but they look pretty cool, some with an almost retro futuristic vibe. 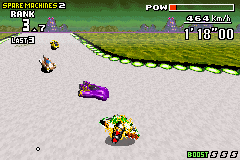 There are four vehicles available at the start like in the original game, but five more can be unlocked by winning the different cups on certain difficulty settings. The tenth and final machine is only made available when naming the save game in a specific way when creating it, which is especially frustrating when figuring out about it after unlocking everything else and realizing that this particular save can never be quite complete. 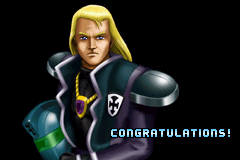 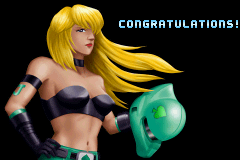 With the gameplay being almost identical and equally excellent as the first F-Zero, it all boils down to the circuit design, and here Maximum Velocity only partly succeeds. But it’s not really a fault of its own – the issue is that almost everything it does with the limited creative means that come with flat maps has been done before. A jump over another part of the course would have been exciting coming immediately after the original F-Zero, but Super Mario Kart already did it in 1992, arguably better, and that game even had a lot more gimmicks for its levels. With 20 courses instead of 15 also comes a bit more filler and repetition, which thins out the frequency of interesting segments for a worse overall impression, even if the game technically has all it needs for thrilling races. 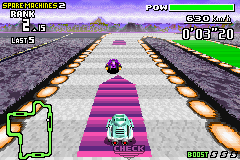 F-Zero: Maximum Velocity is a very good racing game, even if the sole justification for its existence is the opportunity to have F-Zero as a portable experience while straightening out the aspects that made it seem outdated. It still doesn’t offer much in terms of playing modes, only a Time Attack with limited replay capabilities and four player link support are added. The result is adequate, but seems a bit too content with harvesting the low hanging fruit, only ever jumping as high as it has to do in order to pass as “not a disappointment”.