Even though F-Zero is part of Nintendo’s long list of franchises that are only dug out from their vault for new Smash Bros. characters and trophies, it used to be one of the big names identified with Nintendo in the 16- and 64-bit days. As one of Nintendo’s launch titles for the Super NES, it was a showcase of the system’s capabilities as much as it was a sharply designed game, and essentially codified what people would get and expect from a futuristic racer – insane speeds, rocket engines, crazy jumps, and murderous race tracks. 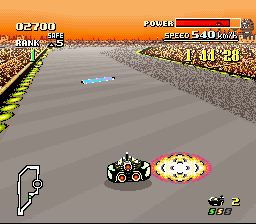 F-Zero was not the first sci-fi racer around by any means, nor was Nintendo’s EAD department acting as a great innovator when designing it. Atari’s 1989 arcade game Stun Runner already contained most of the elements that would later become trademarks of the F-Zero series, like boost stripes on the road, jumps, and even features Nintendo only introduced with the N64 iteration, as it was already made of polygonal graphics. For home entertainment, Nintendo’s title was predated by computer games like Michael Powell’s simulation-heavy Powerdrome for Electronic Arts and Loriciels’ Space Racer, the latter of which used conventional sprite scaling techniques instead. What made F-Zerospecial was the good old Nintendo playability and clear vision. Stun Runner was a very awkward mix between a racing game and a rail shooter, and whatever it was that made anyone consider reaction-based games on 1980s computers playable is lost to time, but F-Zero still holds up today. 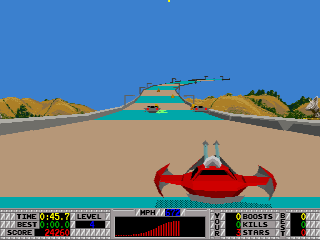 Stun Runner already did tubes in 1989. It took F-Zero almost a decade longer for the same feature.

Is this a race or a gladiator fight?

Despite the sci-fi premise, the concept of F-Zero is straightforward. There are three cups with five race tracks each, and a single race lasts five laps. The average speeds are not ridiculously high above actual Formula-1 speed records – the fastest vehicle tops at 478 kilometers per hour – and the game doesn’t quite feel the speed it shows on the velocimeter, but it still runs faster and more fluidly than most anything else in the genre at the time. For each completed round, the car is awarded with a boost, which pushes the needle above 500km/h and provides a significant advantage when used wisely. A driver with poor timing, on the other hand, might end up being bounced back and forth between the road boundaries, losing not only valuable seconds but also chunks of the power bar. This can be recharged by running over a glowing strip that sends down a repair unit, usually at the beginning of a new lap, but if a car ever runs out of shield energy, it blows up on the spot. 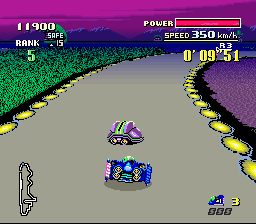 There are some other elements you won’t see at Daytona and co., as the tracks in F-Zero are plastered with mean obstacles and traps. Speedup stripes and jumps may seem like a blessing – in fact sometimes they’re necessary to get past huge gaps in the road – but at times they’re placed in ways that makes it easy to lose direction and end up catapulted outside of the track. There are force fields that cause you to slide all over the floor, and others that pull you down from a jump. Yet other races are plastered with mines or magnets that pull you towards the borders. A special place is taken by the two tracks that take place on the planet Death Wind, where there’s always a strong gust blowing to majorly hamper with your steering. 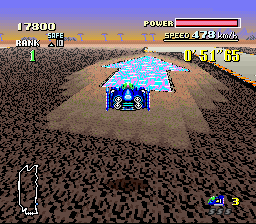 Compared to other Nintendo games of the era, F-Zero still retains a lot of the old arcade mentality and doesn’t even put too much effort into faking an actual simulated race. There are many cars on the track, but beyond the four main vehicles, they’re all generic drones, only the first few differing in color. The game doesn’t want you to see these losers much, anyway. There is a “safe” limit that starts out at 15, but is decreased with each round, and drivers on positions below the threshold are mercilessly disqualified at the finish line. (Strangely, you still overtake scores of generic cars towards the end of the race.) Only the best three racers count as winners in the end. If you ever drop lower than 20, the race ends immediately. You can then try again, but the amount of “lives” is limited. You’re also awarded a score according to your ranking. 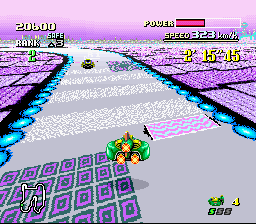 Maybe due to it being a launch title and certainly due to being on a tiny 4Mbit (that’s 512KB!) cartridge, F-Zero is rather lacking in content. With 15 tracks and four vehicles, it’s still more than most arcade racers of its time, but the time it takes to master everything within the comfort of your own four walls is rather brief. There are four difficulty classes to play through, but afterwards it’s only free practice racing to improve on your record times and nothing else. Although other, later SNES games like Super Mario Kart had a split screen mode, the large courses of F-Zero made that impossible, so there’s no multiplayer mode. The four vehicle’s pilots have distinct personalities in a short comic found in the manual – there’s the hero and bounty hunter Captain Falcon, the secretive pirate Samurai Goroh, the brutal alien Pico and the somewhat snobbish professional racer Dr. Stuart who inherited his car from his father – but if you only bought the game without the manual, you wouldn’t even know about their existence.

Together with Pilotwings, F-Zero was Nintendo’s initial showcase for the capabilities of the legendary Mode 7, and to the audience that mostly migrated from the NES, it looked nothing short of revolutionary with its fake 3D graphics. But in the grand scheme of things, it’s capabilities were rather limited. Most noticeably, almost everything that isn’t part of the background or a race car is flat on the ground, lacking anything like the striking roadside obstacles seen in Sega’s Super Scaler arcade games like OutRun. The roads are mostly monocolored, which makes the color gradient that’s supposed to give the illusion of distance seem weird, as the same shades always appear stuck in place on the screen. At least the planets are fairly distinctive. From the metropolis Mute City and quiet ocean planets like Big Blue and Port Town to the wastelands of Sand Ocean and Death Wind, you immediately know where you’re racing even without looking at the track name. Most planets are reused for two or three races each, but in those cases different day times are simulated with changed color palettes to prevent things from looking too monotonous. 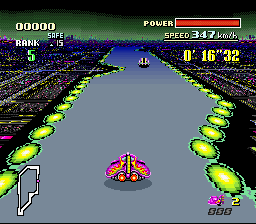 One element that immediately springs to mind when thinking back at F-Zero is the music. Every planet comes with its own theme, one more catchy than the next. The most iconic of them carry throughout most of the sequels, making them an integral part of the distinct F-Zero feel. Even though most of the tunes are fast, the SNES samples give them a slightly jazzy feel. This might be the reason for the shape of the arranged soundtrack by PeeWee and Michiko Hill, which just goes to all out jazz, to the degree that it sounds like a compilation of ’80s sitcom themes. Even the Death Wind theme sounds completely laid-back here. 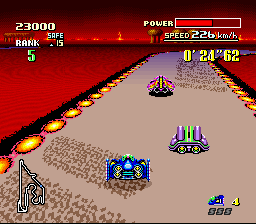 F-Zero on other platforms? 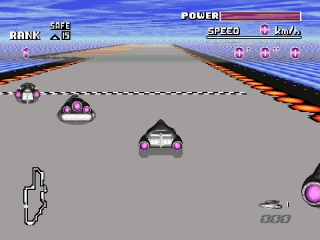 Naturally, all of Nintendo’s games remained exclusive to their consoles, but in 2002, a programmer named Paul Hamilton wondered what it would be like to play F-Zero on his PC, and thus created a fan remake of the SNES original. It always seems to start directly on the King League, although that may be a Virtual Machine issue, as the game doesn’t run very well on new PCs. Otherwise it has all the elements of the original, but the cars are ugly grey prerendered sprites and we couldn’t get it to put out any sound, either. Worst of all, the keyboard controls are unsurprisingly terrible. Still, it’s a neat effort for a homebrew fan game. 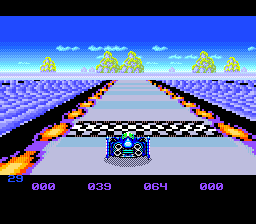 More recently, a programmer who goes by the name of gasega68k made a playable Sega Genesis demo, cheekily labeled G-Zero. It is only a test of an empty Mute City course and the rotating and zooming part of the screen is at a noticeably lower resolution, but with a framerate close to 30 FPS it is surprisingly smooth. 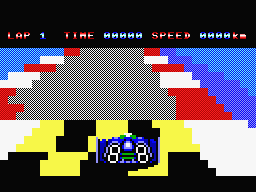 But the most low-tech F-Zero has ever gotten is an MSX2 bootleg version by Madou Yochien. It was made as early as 1991, if the copyright notice is to be believed, and bears the name F-Zeru Kai. It only offers a super tiny 3D view with the camera tilted so you cannot see very far. The graphics are still extremely blocky, but at least movement is reasonably smooth. No matter if you chose Grand Prix or Training, there are no opponents in the race. The game does feature some track elements from the original, such as speed stripes and lots of gravel to slow you down. In “Bloody Wind” the wind blows so fiercely you can never escape from being pushed towards the road barrier, but there is no energy gauge and the car cannot be destroyed. With six race tracks and all four cars selectable, there’s a surprising amount of content in here, even though the program can just barely qualify as playable.

Racing to the future via satellite 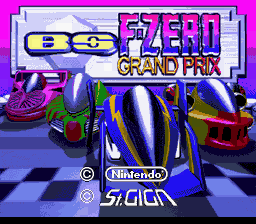 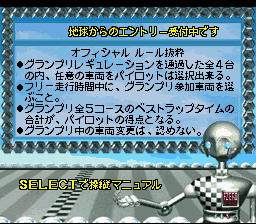 The SNES game was simultaneously the first and the last Western players got to see of F-Zero for eight long years. In Japan, however, Nintendo revived the brand for their Satellaview program already in 1996 with the BS F-Zero Grand Prix. Each of the four broadcasts consists of one cup, but the game is structured a bit oddly. Before each race starts, there is a practice round and a demonstration of a specific tip for the course. The parts were played as timed SoundLink broadcasts with added commentary and arranged versions of the music (different from the jazz album). 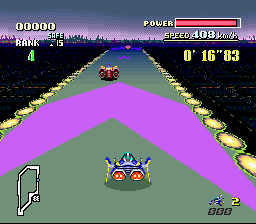 The four iconic F-Zero cars were replaced with new alternatives that have a more fancy look and shuffle the stats around a bit, but fulfill the same basic roles within the game. Even though later entries in the series greatly expanded the roster of competitors, these four vehicles never returned. The tracks are mostly the same, but they’re arranged a bit differently and there is one new course in each cup for a total of 19 (Mute City I is repeated once in the last broadcast). Some of the new courses mix up the familiar elements in unique and interesting ways, but there’s nothing categorically new here. 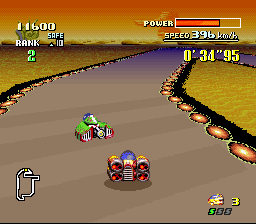 A bit later this was followed by BS F-Zero Grand Prix 2. There was a practice release that was played like a normal SNES game and compiled just the new courses from the previous broadcasts together. The real Grand Prix 2 was yet another SoundLink version which contained at least one entirely new planet called Forest and was broadcast with a completely custom soundtrack, featuring music by the likes of Deep Purple, Janis Joplin and Aerosmith. Only video footage of the first week of this is preserved. 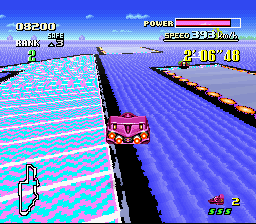