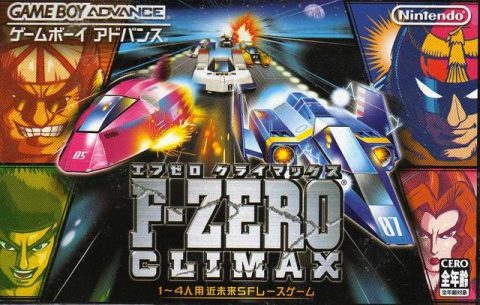 GP Legend, now out of beta

Suzak must have nabbed a two-game contract with Nintendo – even though GP Legends was kind of a disappointment, the developer put out yet another F-Zero for the Game Boy Advance.

The gameplay systems remain almost unchanged from GP Legend, which earned the game some criticism for being a glorified expansion pack sold as a standalone title, but the redundant game here is definitely the earlier title. Despite the similarity, Suzak made some less obvious but still significant changes to the formula. For starters, there is now a two-tiered booster system: When triggering the boost a second time when it is already active, you upgrade it to a Boost Fire, which is roughly as powerful as the boost from the SNES game, but can only be used once per lap. Furthermore, there are only 24 competitors in the standard races and the lap count per race is now down to three, like in F-Zero X. Since the individual courses are not much longer than in the other Mode 7 games, this makes F-Zero Climax the breeziest game in the series yet. That doesn’t mean it’s the easiest, though, as the AI opponents are quite a bit more challenging compared to GP Legend. 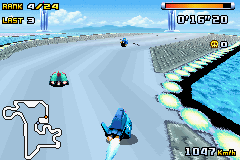 The spin attack is also back, but since the GBA doesn’t actually have enough buttons for all the actions that can be performed in the game, this requires some inconvenient compromises. You have to choose between a number of configurations before each game, some of which include some interesting combinations like auto sliding with the steering at all times. Oddly enough, the number 1 setting doesn’t include a brake button, even though there are some challenges in the game that absolutely require it. The mappings can also be modified freely, which in theory makes it possible to include all vital functions, but that requires to use “up” on the digital pad, which is more than a little bit inconvenient. 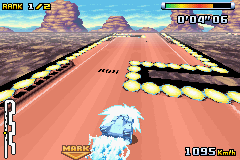 More stuff than ever

But that little control hiccup is made up for in spades with the huge amount of content Suzak squeezed into this cartridge. The Grand Prix settings don’t differ solely in the difficulty of the AI opponents anymore, but instead Expert and Master take place on new roads, bringing the amount of circuits between the Bronze, Silver and Gold Cups up to 45. Platinum Cup shares the same circuits across all difficulty levels, but you have to compete in eight races in a row. Since GP Legend already did the nostalgia tracks thing, these are all new devious variations on the familiar themes.

Survival Mode offers challenges similar to what would be asked of you in GP Legend’s story mode, but here many of the tasks are actually challenging, and there’s a greater variety of them, including races where you must stay on top at all times, death races, really tough slalom courses, and even chicken races (where you’re just out of luck if you happen to have chosen the default control setting without the brake button). 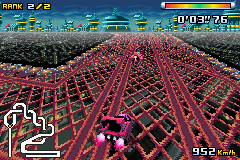 Time Attack sounds like it would go without explanation, but in this case it’s a very humble name for an entire box full of playing options. In addition to the ability to play each individual race from the Grand Prix mode without opponents, by completing all four Cups in Grand Prix mode you can unlock a special Championship course which includes more obstacles than any other race in the game. This submenu is also home to the Zero Test challenges, which number 36 this time. Finally, it allows you to play Edit Courses. 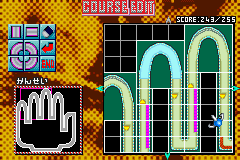 That’s right, the course editing feature that formerly had been the privilege of 64DD owners finally makes its appearance in a vanilla release – figures that it would be the one that never came to the West. The game grants storage for 30 courses, and there’s even an option to share your creations with other players via system link. While it is a pretty cool feature – one of the sample courses is a walled-off version of Big Hand from F-Zero X – the tools are rather limited. There doesn’t seem to be a way to recreate courses with jumps that go orthogonally over other parts of the road, for example. 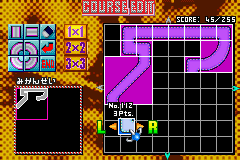 The pointless story mode is fortunately omitted this time, and you just unlock synopses of the anime episodes instead, which can then be read separately in the options menu. In addition to 34 individual drivers, you can also get alternate versions of Captain Falcon, Zoda, and Ryu Suzaku.

Unfortunately, few people seemed to care about F-Zero anymore after being saturated with the double offering from the prior year, least of all Nintendo, who didn’t even bother publishing the game outside of Japan. It’s kind of a shame, cause in many respects F-Zero Climax is the game GP Legend should have been. 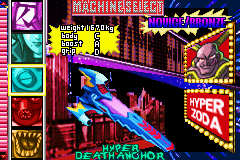