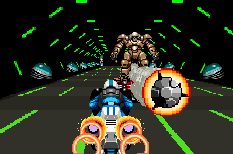 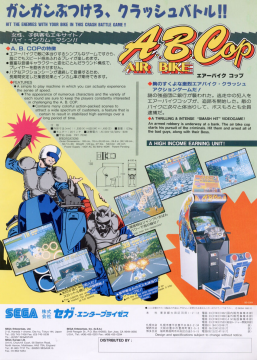 Sega sure did love three-dimensional scaling technology back in the day. Ever since Yu Suzuki gave us Space Harrier, OutRun, After Burner, and nearly everything else by Sega’s AM2 division, token arcades were revolutionized forever as a marvel of graphical prowess, showing that the appearance of video games could be as important (if not more so in some cases) as how they played. Some of the special cabinets were practically amusement park rides, with the 360 super-deluxe version of G-LOC: Air Battle serving as the most impressive of Suzuki’s work. Though to be sure, Sega wasn’t the first developer to create pseudo-3D vehicle titles (Namco beat them to the punch with Pole Position, for example), but they became the company most associated with objects growing really quickly so as to simulate them getting closer as you drove by them. One of Sega’s lesser-known games in this vein was A.B. Cop, which was actually developed by the obscure Aicom, makers of Vice: Project Doom, Pulstar, and other neat games that may sound familiar if you look up their Wikipedia page. Basically, imagine Hang-On if it were set in the future and had a battle element, and that’s what A.B. Cop brings to the table. 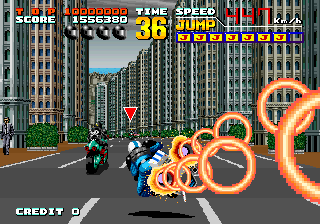 “A.B.” stands for “Air Bike,” and you are an officer of the A.B. corps sworn to apprehend criminals on the loose. Your rad machine floats inches above the ground, indicating a game set thirty minutes into the future where mutants and cyborgs run rampant. This premise plays out much like Chase H.Q., Taito’s fantastic vehicular combat racer where the goal was to pursue criminals and repeatedly smash their car with your own until they would pull over and surrender. However, you’d only get to ramming when it came to the stage boss; A.B. Cop takes matters one step further and allows you to crash into every criminal leading up to the boss. In fact, you are required to destroy every enemy’s vehicle before you can apprehend their leader. A meter of thug heads appears in the top-left corner ranging from five to seven punks, and you’ve got to keep ramming into their vehicles until they fall off. You only need to ding them once to start, but the baddies become more resistant in later levels. Your acceleration button generates these propulsion rings every time you press it, giving you a slight boost in speed. You also have a jump button which lifts your ride into the air, though you can only jump eight times to start. Picking up “J” spheres on the road add another jump to your collection, though it’s best to save your leaps for the big bads.

You need to topple all criminals before the leader of each gang appears. For example, after taking down five goons in the first stage, you face off against “Boris the Skinhead,” a gruesome troll of a man with black pits for eyes, jagged teeth, spiked maces and a penchant for tossing fire everywhere. All bosses act similar in that they toss out projectiles to slow you down and swing melee weapons to block you if you get close, and you need to drain their lifebar to bring their getaway vehicle down in a bunch of explosions. Smashing into them while jumping blows off a large chunk of life and is the best way to win against them. A.B. Cop‘s over-the-top goofiness particularly shows through with its bosses; one stage has you hunting down a fully-armored shogun warlord who attacks you with skull ghosts, and the next level has you chase an evil clown through the desert as he pelts you with striped balls. This game knows it’s absolutely silly and revels in its own audacity, which makes the experience all the more fun. Take the continue screen, where bizarre frowning faces adorn the background as your cop shrinks in despair, whereas continuing transforms the faces into equally creepy grins as your guy triumphantly throws up his arms. 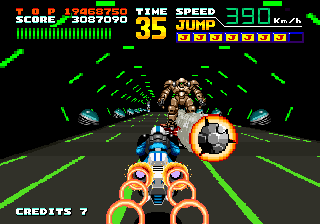 A.B. Cop is as fun as it is simple, though it can take several continues to beat. The difficulty takes a major spike up in level 3, which is somehow more difficult than most of the stages that follow it due to the high amount of interfering objects and the particular slipperiness of the ninjas making it really difficult to eliminate them all in the designated time limit. It can be tough to always align with enemies and hit them, where you’ll sometimes be trailing behind them even after boosting several times, and at other points you’ll overshoot them and they’ll take a while to catch up. You can’t ever actually die, but you can lose a couple of seconds if you’re hit so badly that your vehicle spins. Having to continue adds bonus time to make your reprise a bit easier, and you restart with a baddie already derided, but it may not always be enough to beat the stage without a little extra skill or luck. Even so, the game can be beaten within about twenty minutes easily, and the gameplay is incredibly simple to the point that A.B. Cop may be considered to emphasize its graphics over its substance. Then again, it runs on the same System X hardware as the legendary After Burner, and despite being three years after After Burner hit the public, A.B. Cop still makes very good use of the system’s power. Stills can’t do it justice, and the game itself is pretty danged fun to play, but nothing outside of the arcade could handle its graphical prowess and it was far from Sega’s most famous release, so emulation is really the only way to go outside of finding an actual A.B. Cop cabinet. However you play it, prepare to have a fun time ramming cyberpunks in the year 2XXX.