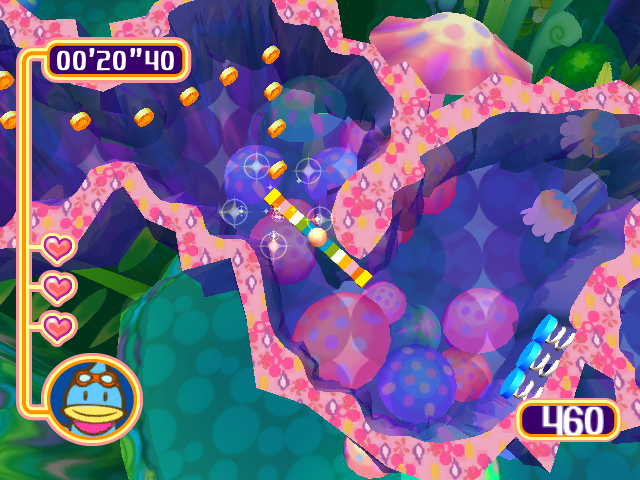 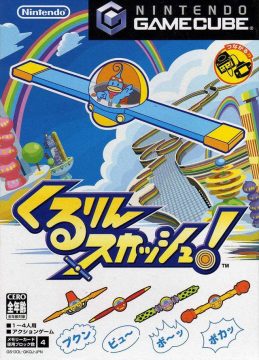 Kururin’s only console installment utilizes 3D graphics while keeping the same 2D mechanics. The visuals aren’t technically all that impressive (cel shaded polygons similar to the style of Kururin Paradise would have been nicer), but they’re colorful and still plenty attractive. In the cutscenes, Kururin and pals are rendered as little cardboard puppets held on sticks, making for some pretty amusing cutscenes reminiscent of a kid’s TV show. Beyond the graphics, the real advantage of being on a TV screen is that the field of vision is much wider, and the view isn’t nearly as cramped as it was in the GBA games. Although it doesn’t utilize true analog control (you still need to press B to speed up), the GameCube controller is much smoother than the GBA directional pad. 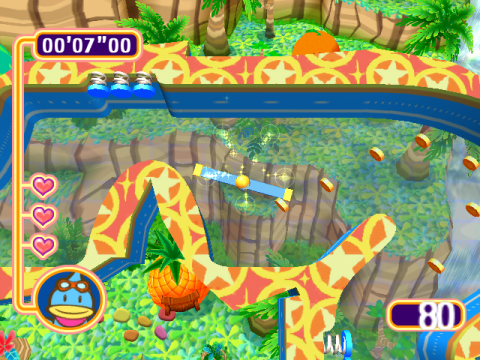 While the alternate paths from Kururin Paradise have been removed, each stage is now littered with coins. In order to get a perfect rating on a stage, you need to collect all coins in addition to reaching the exit without getting hit. Naturally, the stages can get pretty big, and you’ll need to cover every precarious nook and cranny to get 100%. You can also use these coins to buy a variety of items. Like the original, there are lots of useless things, like different Helirin skins or the ability to customize your life meter, but you can also buy maps, extra hearts, and an item that lets you continue from a checkpoint if you lose. There are also tons of super play videos to purchase.

In addition to the standard Helirin, there are now several different kinds of ships. One Helirin has boxing gloves at each end to knock around foes. Another has a pair of lasers. One can twirl around and shoot out miniature hurricanes, which can be used to push objects or block flame jets. Another lets you dive underwater, challenging you to dodge objects both above and below the surface. Most of these play similarly to the regular stages, but there’s also one where Helirin rides on a rail and can shoot flames out of its rotating blades. In addition to these new ships, there are still plenty of stages in the classic style. At the end of each world, you need to fight a boss battle using one of these new Helirins, challenging you at the skills you’ve learned throughout each zone. Including these boss levels, there are a total of forty stages in the Adventure mode of Kururin Squash. With the ability to use the items, most of these are quite easy, especially compared to Kururin Paradise. There are once again plenty of Challenge levels, but these are pretty short, as always. The multiplayer options are limited to a Race mode (similar to the first game) and a Battle mode, where up to four people beat each other up for coins. There’s also a Game Boy Advance mini game that can be played with the GBA link cable, but it’s a pretty crappy matching game. 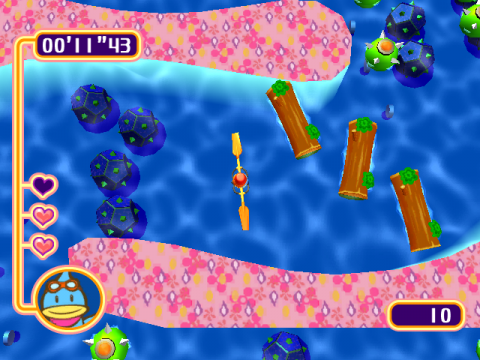 Once again, Kururin Squash stayed in Japan, although it’s quite cheap and easy to obtain. Just beware that playing on a non-Japanese GameCube with a Freeloader will cause most of the text to become garbled. Navigating menus is easy, but all of the plot scenes and item descriptions will be unreadable.