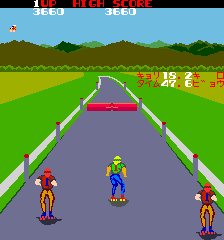 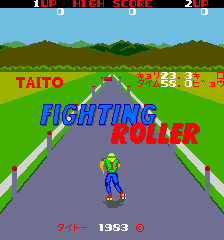 It’s unfortunate that there’s not much to say about Kaneko as a company, but they were just too obscure and out of the mainstream spotlight to make much of a splash in most people’s minds. It’s not that their games were of shoddy quality, but their products never got much attention. Even from their first documented game, Fly-Boy, no one really knew or cared much about them, particularly in America. The most note they ever got overseas was allegations of considerable racism for the first boss of their beat-em-up DJ Boy. Still, their worth is justified if not just for the Jackie Chan fighting game and the shoot-em-up Cyvern, but their work history was spotty at best. Still, they at least tried hard to make noteworthy games, and one of their earlier works known as Fighting Roller was actually pretty amusing. It was one of the first (and surprisingly few) rollerskate racing games, where you portray a mullet-endowed skater with “1” on the back of his lime green shirt. This game also made it over to America under Williams’ license under the name “Roller Aces“. It kept the gameplay the exact same but altered the player’s sprite to remove the “1” on the back of his shirt and place a helmet over his fabulous head of hair. While a bit of a boring change, it’s sensible not to brag you’re the best on the back of your shirt while promoting proper X-sports safety procedures. 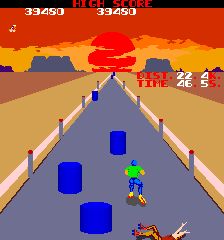 Fighting Roller / Roller Aces is all about holding forward to jet down the racetrack and avoiding all the dang obstacles you can. All tracks are littered with all sorts of crap: Speed bumps, rocks, cylindrical columns, and gaping pits. If you have to lose, falling down a pit is definitely the best way to go. When your guy hits the bottom of the pit (which is actually pretty shallow), he spazzes out and repeats some gesture that looks a bit like “raising the roof” with a pelvic thrust. Maybe he’s thrashing his limbs around in angry frustration, but the sprite animation ultimately comes off as some sort of ridiculous failure dance that almost looks positive. I guess if you’re going to fall into a ditch and possibly injure your legs, the least you can do is stay upbeat with a groovy jig. Anyhoo, something about the perspective combined with all the crap you have to dodge is reminiscent of the Nintendo/Rare co-junction Slalom, even though “Fighting Roller Aces” predates Slalom by three years. However, instead of merely losing speed and a few seconds of your time, you outright lose a life, of which your normally have three. You can also lose lives if you take too slow to reach the goal, but obstacles are the far greater hazard than time, particularly in the later levels.

The first level is a time trial and is pretty simple. You only get a few gaps here and a few pillars there, and if you do well enough at the end of it, you get more lives help you with the stages ahead. The first real stage proper introduces red-shirted rivals who are palette-swapped versions (possibly genetic clones?) of you and will attempt to punch your lights out. If they’re lined up so they’re able to hit you, they flash yellow and attempt to approach if you’re not moving fast enough. You can punch them before they punch you and you get a fair point bonus for doing so, as well as an end-of-stage bonus for how many rivals you toppled, and you even get credit if they topple over an obstacle during pursuit. While it seems like a standard no-rules rollerskate race at first, at the end of the first level onward, things get downright WEIRD. Instead of crossing a goal line, you instead run into an elevator which warps you into some trippy future world whose visual motif seems borrowed from Battlezone, or possibly Tron. This doesn’t really add anything new to the gameplay; you still deal with obstacles, pits, and rivals who lazily haven’t changed their appearance to fit with this new cyberspace background. 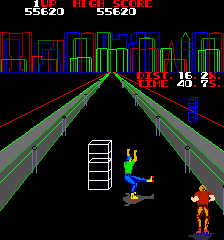 This wireframe world raises a host of questions: Is it the future or an alternate reality? Are you in the Internet or some computer world? Why is your humble skater able to jump between these planes of existence? Is he a Flash Gordon-esque crusader of justice sworn to fight off his own evil roller-clones in present and future? Oh, who bloody knows. Just focus on not losing and racking up as high a score as you can. Amusingly, your score isn’t reset if you lose all lives and have to continue, so you can rack up a massive point total if you just have enough patience and credits. You can also collect money bags, but these only exist in Roller Aces for some strange reason. Not that they’re particularly missed in Fighting Roller, as your focus will be on attempting to avoid oncoming hazards 90% of the time. A few stages even bombard you with rival skaters approaching you from the front in a deadly game of chicken.

Fighting Roller / Roller Aces is a very simple whose somewhat abstract design for half the stages gives it an extra edge of weird, and weird was most certainly Kaneko’s bag. It wasn’t particularly auspicious for their finances, but it’s definitely not a bad game, albeit later levels become so clogged with obstacles that it’s almost impossible to swerve out of their way for more than three seconds. Some of them can be jumped over, but spamming jumps will only work for so long before you trip and either fall on the road or hurtle into a pit and perform your ceremonial falling-into-a-ditch dance. For as wicked as it can get, it’s still an innovative take on the racing genre which was mostly populated by racing in vehicles throughout the eighties. While no sequel to Fighting Roller / Roller Aces was ever made, the closest thing ever made akin to it would be Skitchin’, released by Electronic Arts on the Genesis ten years later. It’s essentially the classic motorcycle racing game Road Rash but with rollerblades instead of bikes, and as in both Fighting Roller / Roller Aces and Road Rash, you get to attack opponents while they do the same to you. It’s only a thematic connection, but it’s the closest there is to rollerblade racing action in Fighting Roller‘s style, and you get to hitch rides on cars to boot!