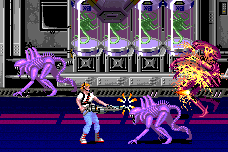 The Alien movies were a huge inspiration for Konami’s Contra, so it would only make sense that they’d eventually pick up an official license for it. Strangely, this game – based on the second movie, Aliens – was released in the arcades in 1990, a few years after the release of the movie. (The other Aliens games were licensed by Activision and Square, for release on home computers in America/ Europe and Japan, respectively.) The characters are technically unnamed, but you can logically assume that you take the roles of Ellen Ripley and Corporal Hicks as you fight through an infested industrial compound. The game plays like a combination between Contra and a beat-em-up – while it’s all shooting action, you can move up and down in the scenery, and you have a life bar. You can’t jump, but you do have the ability to duck and fire, which not only lets you hit crawling aliens, but also makes you a smaller target. 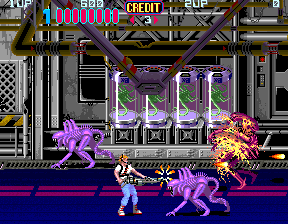 Your default weapon is a machine gun, but you can find rocket launchers and, of course, flame throwers. There are also grenades, which are found in limited quantities, as well as a few choice areas where you get to climb into the loader suit (from the end of the movie) and awkwardly battle enemies. There are also a few segments where you climb through an enclosed tunnel with a radar appearing on the top of the screen. It’s useless in the first encounter, considering you can see the enemies coming directly at you, but it’s more interesting later on when the aliens start bursting through the ceiling. A few stages are first-person scenes where you’re driving armored vehicles and shooting at aliens in the road.

It captures the feeling of the movie perfectly, and it’s always fun tearing apart legions of vicious aliens with a machine gun, or setting them ablaze. The ending scene where you eject the Queen alien out of the airlock, complete with scaling effects, looked damn awesome in 1990. The only issue is that the game looks and feels a bit choppy, as if it’s running at a lower frame rate. Although it was never ported and there technically aren’t any direct sequels to it, Capcom’s fantastic Alien vs. Predator is somewhat similar, although it’s closer to a beat-em-up than a shooter. 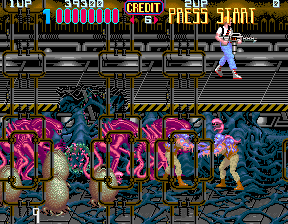 There are actually two different versions of Aliens. The Japanese version (probably the initial release) is lacking the APC stages, as well as Newt. The game in general is a bit easier, with enemies taking fewer hits, and power-ups are much more frequent. There are a few new minor enemies, and some of the other ones appear at different points. The final battle is actually harder, with the Alien Queen having an attack that sends out multiple images of herself, as opposed to the acid spit in the other version.