A bag of anime tropes

After years of teasing a sprawling sci-fi anime universe beyond the races in the games, Nintendo finally went ahead and licensed the IP to Ashi Productions, who made a 51-episode animated series out of it. Instead of focusing on the familiar pilots, the series introduces the police officer Ryu Suzaku as a surrogate for the audience, as he is involved in a terrible accident while chasing the criminal Zoda. On the brink of death, he gets frozen for a few centuries to wake up in the era of the F-Zero tournaments, where he teams up with the Mobile Task Force. The body of his arch-nemesis meanwhile has been obtained by the evil organization Dark Million, who turned him into the pink monster he is known as from the games. The premise kind of rips off the old anime series Mirai Keisatsu Urashiman, and a plot summary of the series reads like a checklist from the Guide to Generic Anime, drawing from all the standard tropes: Captain Falcon really is Jody Summer’s brother who has lost his memory, Falcon and Black shadow are not just headhunter and criminal, but the very incarnations of light and dark, and there even is a Dragonball-like fetch quest for ancient powerful objects involved. 4Kids Entertainment brought the series over to North America, but it was cancelled after only 15 episodes. 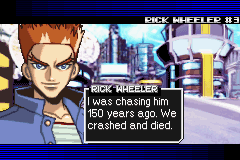 Since it ties in directly with the animated series, GP Legend features an extensive story mode where you follow the exploits of eight central characters through five chapters each (plus a few secret stages). At the beginning, the only available episode is the story of the anime’s original hero Ryu Suzaku (renamed to Rick Wheeler in the English version), but eventually you unlock Captain Falcon, Jody Summer, Jack Levin, Samurai Goroh, his newly introduced amnesiac wife Lisa Brilliant, Black Shadow and Zoda. A few of the story missions are standard races, but the majority consists of rather dull duels and chases. If you’ve ever played an F-Zero game before, the story mode here will be by far the easiest thing you’ve ever encountered. The stories are always just one character chasing another, with plenty of meandering text to fill the scenes. It’s utterly boring and pointless. 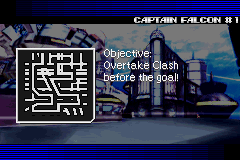 It’s not all bad

It’s unfortunate that the bad story mode is front and center in this product, as the rest of it is still pretty good. Aside from the usual Grand Prix, Time Attack and Practice modes, Suzak introduces a new mode called Zero Test, a collection of brief challenges, where you have to perform tasks such as navigating around tight corners with a heavily sliding machine or completing short stretches with an excellent time. As you can tell from these examples, the challenges are not terribly creative, but for series veterans it is still the most interesting mode in the entire game thanks to the high demands for perfect rankings in the higher groups. The session time is also quite short since they never go beyond a single lap, saving you from boredom through brevity. 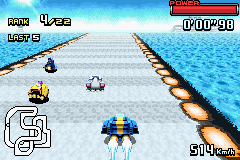 After Maximum Velocity went back to the series roots in order to accomodate the limitations on Game Boy Advance, Suzak’s game attempts a mixture between the new and old styles. The stages are still all perfectly flat Mode 7 planes, but the booster mechanics, combat (minus the spin attack) and nominal speeds are taken from F-Zero X and GX. The controls also adopt the somewhat looser feel of the fully 3D entries, so precision is not as essential this time. 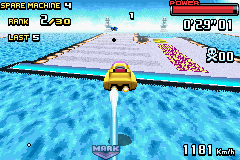 Unfortunately, none of the circuit designs are quite good enough to fill the game with enough purpose to fully justify its existence. It’s pretty telling that the Platinum Cup, which consists entirely of five tracks recycled from the original F-Zero, has more exciting races than all the others combined. 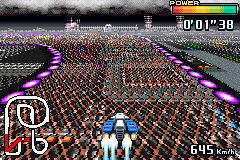 Miyamoto is not a fan of F-Zero now

In later interviews, Miyamoto mentioned how Nintendo had become cautious towards outsourcing its franchisesdue to experiences with F-Zero and Starfox, and also assumed that players had gotten weary of the series. Given how uninspired it all is, it’s hard to suspend the thought that it exactly this game might have been a major contributor to inspire both sentiments.