Fighting for the future

F-Zero fans had to wait long for a proper sequel to the SNES launch title. Even after the Nintendo 64 hit shelves in 1996, it took two more years before F-Zero could conquer truly three-dimensional spaces. At that time, the landscape for futuristic racing games looked way different compared to 1990. Tech-savvy British developers had conquered the genre, with Psygnosis’ Wipeout at the forefront, followed by Hi-Octane (Bullfrog Productions). Even on Nintendo’s home turf, Extreme-G by Probe Entertainment was sending players around breakneck courses that would have filled a rollercoaster architect with envy. 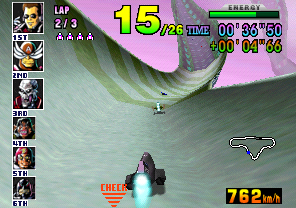 All of these games have one element in common: They were heavily action-oriented, diluting the racing experience with scores of single-use weapon system powerups in Super Mario Kart fashion. But regardless of the trend and despite Super Mario Kart co-director Tadashi Sugiyama being at the helm of development for F-Zero X, Nintendo EAD opted for maintaining the puristic concept introduced by the first game. The only upgrade awarded during the course of a race is the familiar booster, which is now unlocked after the first round in each race, whereupon it can be activated at any time. It is directly fed from the cars’ shield power, however, so it is ever more imperative to use it wisely. Even when you manage to not crash before the next recharge strip, it’s generally not a good idea to deplete it too early, as a car without energy loses speed significantly, making it very likely to be overtaken (or rammed and destroyed) by many opponents. Sitting on too much energy, on the other hand, is a waste you cannot afford too often, as all the CPU drivers get the booster, too. 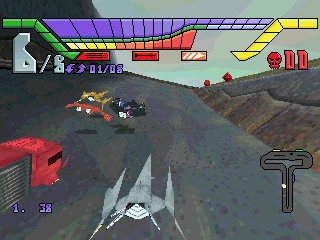 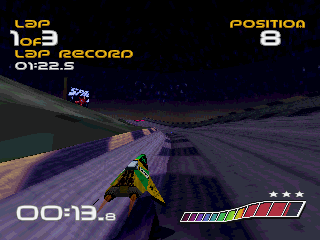 Wipeout and Hi-Octane, two of the titles that sought to fill the void left by F-Zero in the mid-1990s.

The lack of weapons doesn’t mean that F-Zero X shies away from combat entirely. Tapping the R or Z trigger twice allows engaging in a ramming maneuver, which not only pushes a rival driver off course, but also takes away a good chunk of their health and can even destroy their vehicle immediately if they crash right into a track barrier or into the void at unprotected stretches. Holding one of the triggers while tapping the other furthermore executes a twisting attack, which causes you to lose a lot of speed, but works wonders when bumping into a throng of cars. Taking out rivals is extremely effective, as any driver whose car is destroyed gets zero points for the race, which easily can cost a champion the top space on the winners’ rostrum. In the Master difficulty, the opponents get so good that all but the best players probably will have to resort to such petty means to secure their ranking. 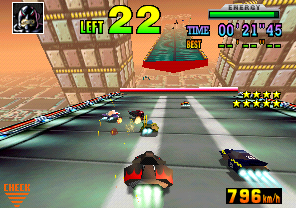 With the jump to true 3D, the track design is much more adventurous than before. There are fewer artificial obstacles – no mines or magnets here, and the planet Death Wind is eradicated from the galaxy entirely – but instead the challenge comes from the course layouts. At some points the road turns into a half looping, only to have you drive back passing your pursuers on what is now your ceiling. There are some crazy long jumps as well. But the main attractions are certainly the gimmicks introduced on selected tracks. Already in the first cup, you get to ride through a long tube, which you can rotate around by 360 degrees. This is followed soon by a similar tube, which is approached from the outside, where you search for hidden speedup arrows while still managing your velocity to not get thrown off at turns. There’s also a deadly half-pipe and a track shaped like a big hand, aptly named Big Hand, with no railing for most of the time and insane hairpin bends at every fingertip. 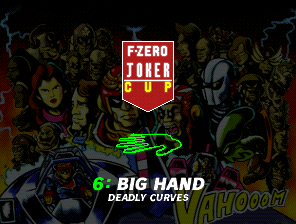 The amount of designed courses is up to 24 – four cups with six tracks each. When clearing them all, you additionally unlock the X Cup, which sends you on freshly random-generated roads each time. The results range from boring round circuits to the meanest deathtraps, although the courses tend to average in on the dull side with only occasional surprises. It’s a testament to the AI that it can handle most of the stuff the generator spits out, although it’s also possible to have a race no one of the CPU drivers is able to finish every once in a while.

The price of speed

F-Zero X has been much criticized for its lack of graphical fidelity, even when taking the usual weaknesses of the N64 platform into account. Indeed, a pretty game it is not. The drawing distance is not terribly far, the car models are functional but not very detailed and there are not many decorative objects aside from some advertising banners or the occasional cube-shaped skyscraper protruding from the flat planet surface. The bitmap backgrounds are not only less detailed but also less varied than the eight years older SNES original. 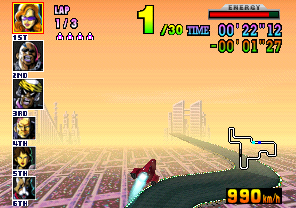 But lack of detail is the price Nintendo EAD willingly paid for absolute fluidity of the gameplay, which runs at a steady 60FPS at pretty much any time. And this was indispensable to convey the insane velocities F-Zero X is meant to simulate. While the SNES game was fairly conservative with its metrics, the vehicles now have the capability to crack into supersonic speed on a long straight. It’s hard to tell if it’s a physics glitch or intentional behavior, but on some courses, you can go so fast that your vehicle is ripped right off the magnetic road and pulled into the void. The game doesn’t feel quite as fast as it’s supposed to be, mainly due to the lack of reference in form of roadside objects and the usually generous spacing of the tracks, but it’s still the fastest, most fluid racing game of its time. 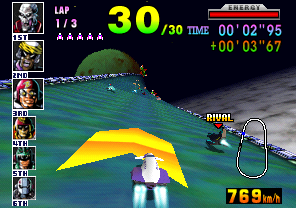 With the added time for development, F-Zero X became a much more content-rich game than its predecessor. This not only reflects in the greater number of race tracks, but also in a solid range of play modes. Aside from the obligatory Grand Prix mode in four difficulty levels, there is Time Attack, Practice and a Death Race, a single straight, vertically looping course where the goal is to take out all 29 other cars in the shortest time possible. Time Attack has unlockable staff ghosts on each track, which will take a good amount of practice to beat even after you’ve mastered the GP. Contrary to the first F-Zero, which was strictly a solo experience, F-Zero X supports splitscreen races for up to four players. Other than Mario Kart 64, it even keeps the music with all four players, but the 2D background elements are omitted in splitscreen. All multiplayer races are fought out between four cars, with the remaining slots filled by AI drivers. 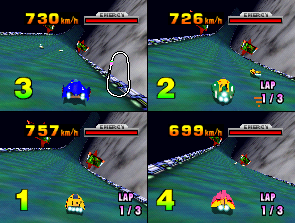 The four player splitscreen is tiny, but it’s not like you’re missing out on any significant details.

The F-Zero universe has been expanded, too. Now all 30 participants in the races are individual pilots, all with their own characteristic vehicles. It’s an incredibly colorful roster, with heroes and villains, comic book homages, and even a nod to the Starfox series in the form of James McCloud (who is referred to in Starfox as Fox McCloud’s father, although here he is human) with his car styled like an Arwing. Their designs almost make the game feel like an anime license, as if there was a fun and sprawling sci-fi narrative just waiting to burst from under the surface. All that’s ever presented in the game is a one-liner given by them after winning a cup on the Master difficulty, though. The driving characteristics of the cars is determined by three grades for body, boost and grip. The acceleration and top speed of a vehicle are mostly determined by its weight, but the balance can be tuned a bit before each race, alongside a choice between four alternate colors for each car. 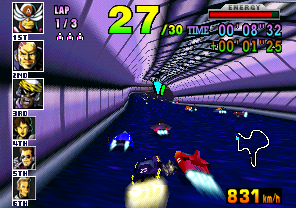 The music is once again superb, with many of the iconic tunes returning from the first game. The style is significantly more rocking, with screaming guitar sounds at their center. The F-Zero X compositions are the versions most people probably think of when the F-Zero music is mentioned, and they’re unquestionably the versions that most fit the feel of the game. Unfortunately, due to cartridge space limitations, they’re kept in monaural audio in the game. The F-Zero Guitar Arrange album includes live instrumental versions of the music, which are all fantastic, though the CD is exceptionally rare and pricey, both due to its quality and the relatively sparse print run. 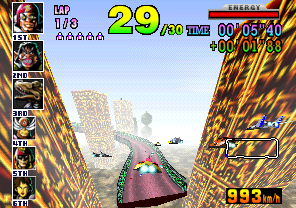 F-Zero X is the most clearly defined and the most typical example of the F-Zero essence. It might not be the most impressive-looking game out there, but its graphics are just as elegantly restrained as its gameplay, and there’s this sense of minimalistic future chic about the whole program that makes it seem like a more worthy work of art than most intentionally artsy games.

Another expansion only for Japan 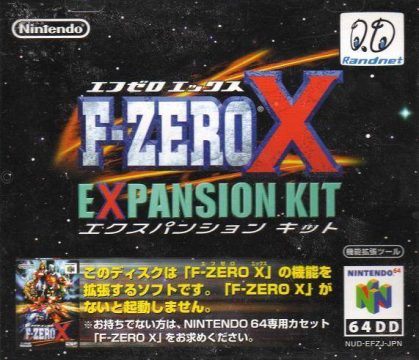 Nintendo’s fancy Disk Drive add-on for the N64 didn’t amount to much of anything, but one of the few good uses that it got was the F-Zero X Expansion Kit. It comes with extensive editing options, courtesy of the ample storage space on the disk. The vehicle editor that allows the creation of new cars with individual appearance and specs of the cars, put together from individual front, rear and wing elements. Player created machines can be set to replace any preexisting ones, and “Super” versions for Captain Falcon, Samurai Goroh and Jody Summer’s vehicles are also available, complete with tough-looking redesigns for the pilot portraits. Otherwise, the vehicle editor is quite limited. 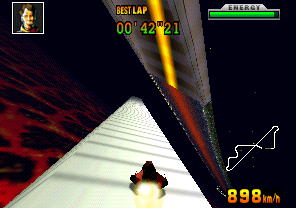 The fully realized track editor is much more powerful – allegedly the exact same tool the Nintendo EAD team used to create the official cups. Due to the somewhat archaic interface it takes much dedication and patience to get anything worth playing out of it, but the possibilities are immense. As if to demonstrate the capabilities of the editor, the Expansion Kit also adds two entirely new cups with more extreme applications of the known elements than anything seen before. Finally, the add-on includes optional stereo music for the whole game.

Unfortunately, since the 64DD remained a Japan exclusive, Western players never got their hands on these additions. Nintendo didn’t bother adding any of the features to the Virtual Console release, either. Only very recently inventive hackers managed to convert dumps of the 64DD software into the regular cartridge format, which makes it possible to run the Expansion Kit in the emulator Project 64. It is even available fully in English, integrated with the US version of the game, so importing an actual Japanese N64 with the 64DD drive finally isn’t the only option to experience it anymore. 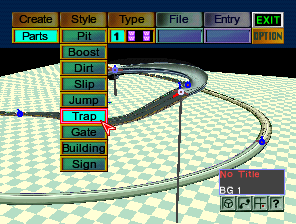 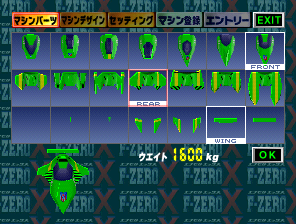 Vehicle and course editors in the Expansion Kit