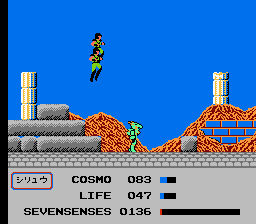 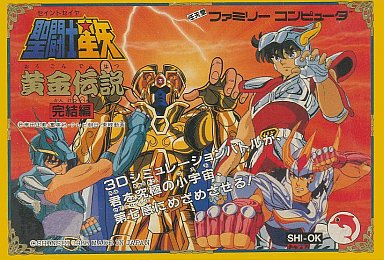 Saint Seiya: Ougon Densetsu Kanketsu Hen is a follow-up to Bandai’s equally awful Ougon Densetsu, released less than a year after the earlier game. Both are based on a Shonen Jump manga and Toei anime called Saint Seiya, or Knights of the Zodiac. It involved a bunch of guys in mystical armor fighting evil guys in mystical armor, who try to do nasty things to Athena and the world. The series had a very simple structure, already almost like a video game, with a series of levels accessed after defeating the bosses of lower levels, which then leads to more fights with stronger bosses, all to save a damsel in distress the last one. There are even a handful of protagonists in the series, for the sake of variety. It seems like Bandai’s programmers had their job already laid out in front of them. So why does it still suck?

Well, the problem lies in the format. Instead of the pure side-scroller one would expect after the first stage, it’s a hybrid between action game and a turn-based RPG. The regular action sections are dirt simple, even though there are times when it’s just not possible to avoid getting hit. The actions sections are simple. Go forward, shoot the three enemy sprites available, try to avoid meteors, fail at it, jump over gaps, get shot by archers and then go up to a temple entrance. The only variety is found in special dimensions which some of the bosses teleport you to. While travelling through this part you may notice the “sevensenses” bar at the bottom. The bar can be used to replenish the Cosmo and Life bars once you reach the boss battle. It fills up slowly for every killed regular enemy and in larger chunks for the bosses. However, the game doesn’t like to see you making things too easy for yourself, so should you decide to find yourself a nice grind spot and start accumulating some sense points, the game literally drops a meteor on your head.

At the end of an action section you come across a boss and here’s where the fun begins. You have several options: attacking, talking, observing your status, and summoning one of the other characters. Depending on the character, there may be different attacks to choose from. Using the attack option seems to be based on pressing the appropriate directional buttons at the time you cast it, but it’s hard to tell for sure. After an attack the enemy might say something and… He does an attack that always seems to hit.

Turns out you’re supposed to physically dodge the attack by pressing the correct directional button just before it starts. If you manage to dodge successfully but in the wrong direction, your character will stay out of reach for a while and then return to the centre of the screen when 2/3rds of the attack are over, but he takes the exact same damage as if he’d done nothing at all. Worst of all, the dodging is like a quick time event – an incredibly strict quick time event, with no button indicating when you’re supposed to dodge. You’re just meant to know you can dodge just slightly before the bad guy’s text stops scrolling… Assuming you didn’t accidentally press it before, or else it will fail no matter what. This means that dodging attacks requires predetermining exactly when the enemy will stop talking (and they sometimes simply attack without speaking).

In general the RPG section takes the worst elements from the genre and glues them on top of each other like some bizarre modern art piece. The game devotes itself to slavishly adapting the plot of the original series, which is extremely detrimental when you have a free selection of characters to play as. This means that if someone lost in a fight in the series, you have to go into the fight as them, lose, and in a best case scenario have to fight with a new character that pops up out of nowhere. There is a point where the game seems to want you to lose with all four characters, meaning you’re forced to play the level four times consecutively before the new guy pops up. Later you have to revive one of the fallen characters by having Ryu chose from a series of items, and if you choose wrong you have to restart the stage over again and hope you get lucky the next time. At other times the game will randomly make it impossible to hurt the enemy (although they will still hurt you) until you talk to said opponent… twice! There’s a gimmick like this for almost all bosses in the latter half of the game. The last boss might be the worst: Even if you successfully deplete all of his Life and Cosmo, he still keeps fighting. You’re actually meant to lose so another character can get brought back and learn a random move to finish him off. Except you probably won’t know this at the time, and by this point the boss only does 3 points of damage per round – out of about 799 Life points you can have if you didn’t screw up. So this will take a while.

Saint Seiya: Ougon Densetsu Kanketsu Hen is a catastrophic mess that tries so hard to faithfully adapt the source material that it becomes largely unplayable.