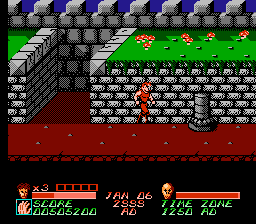 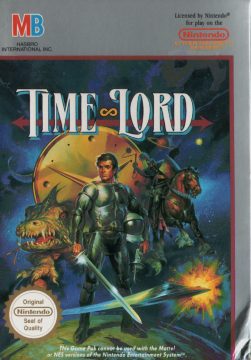 Time travel is an alluring concept for an action game, since it promises huge array of interesting places to visit, weapons to use, and bad guys to kill. And that’s exactly the appeal of Time Lord (no relation to Doctor Who), where you control a soldier in the future year 2999 sent back through time in order combat an alien invasion. These interstellar baddies figured the easiest way to conquer Earth was go back into time and muck it up, so to fix it, you need to find five time orbs in each stage, kill some bosses, then travel to the next era. You’ll fight knights with swords in medieval England, duel with pistols and rifles in the American Wild West, toss throwing knives at pirates on a pirate ship, and lob grenades at baddies in World War II. A good premise, along with some nice box cover art, largely wrecked by some absolutely hateful game design. 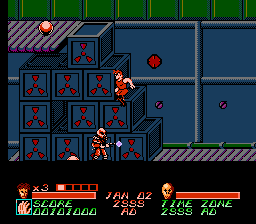 The first stage takes place in the future in the MB (presumably Milton Bradley, the publisher) Time Travel Research Center, right before you begin your journey to the past. The game is presented from a skewed angle, similar to a Double Dragon-style belt scroller, but it’s not really a beat-em-up, owing to both how it plays and how the levels are structured. The stages are non-linear, requiring you to hunt down all of the orbs. The stages scroll in all directions, so you need to jump around a lot, and there’s quite a bit of ground to cover even though most of them technically aren’t all that big. Finding all of the orbs to unlock the next stage is incredibly simple here in the first stage, as they’ve conveniently been dropped on the steps leading up to the time machine. A good start!

The second level takes place in a medieval England castle, which is being ransacked by dwarfish archers and dragons. It’s here where the orb collection gets a little trickier, because many of them are either hidden or involve some kind of puzzle solving. There aren’t any actual clues though, so you just need to mess around to see if you can figure things out. One orb is out of reach, but if you wildly jump and kick, you’ll discover a secret platform that will bounce you up into reach. In another spot, there’s a small garden of mushrooms that mysteriously regrow when you pick them, but if you manage to swoop them all up quickly enough, another orb will reveal itself. These are relatively easy to figure out.

It gets worse, though. The next area is the Wild West, which gets a little trickier, primarily due to the perspective. There’s another case where there’s an orb, which floats out of reach as you get close to it and descends when you walk away. You’re supposed to get back, then jump and fire at it so it freezes in place, low enough that you can grab it when you get back up close. But depth perception is extremely tricky here, and you just kinda need to mess around to find the right place to line up to hit it consistently. 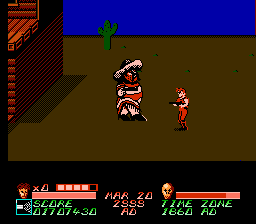 This level also features an absolutely ridiculous boss fight, which will likely be the blocking point for most players. It’s a dual pistol wielding guy with a sombrero, with a simple attack pattern where he just walks back and forth while firing his guns. You just need to dodge out of his path and fire back. The issue is that he takes an absolutely insane amount of hits to kill. There is, technically, an “enemy” life bar at the bottom of the screen, but unlike in Castlevania or Ninja Gaiden, where it denotes the boss health level, this indicates the overall health of the main end boss bad guy, which just sorta nebulously depletes on its own as you go through the game. In other words, on a purely functional level, it’s absolutely useless.

It’s also important to note that there’s an overall time limit to beat Time Lord. It operates under the “San Dimas Time” trope in that time is flowing in the future even though you’re in the past, at the rate of one day per six seconds. In practice, this means you have a little over half an hour to beat the whole game. It’s no joke that you’ll probably spend about two or three months of this time just fighting this damn bandito. And it’s not even particularly difficult, technically it’s just really drawn out and tedious, and it’s easy to make a few mistakes when moving back and forth. Also, while there are occasionally extra lives and health restoratives found in the levels, there are no continues, so it’s back to square one if you exhaust your supply. 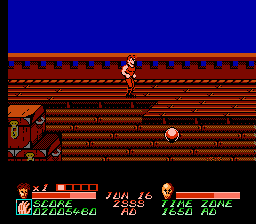 The rest of the levels don’t really get any better. The pirate level is the most confusing since it weaves back and forth – at one point it feels like you’ve gone in a circle, due to the repetitive scenery, but you really haven’t. You get throwing knives here but they feel worse to use than the guns from the previous level. The end level boss here is a clam, for some reason.

The World War II trench level has an orb right at the beginning but it’s impossible to get for some reason. There’s no real actual trick, you need to collect the three other orbs in the level, backtrack all the way to beginning, grab it, and then backtrack again all the way back to the end for the boss fight. Also, there’s another orb floating in mid-air that you need to shoot that’s  nearly impossible to aim at, but now it’s also spiked and zooms back and forth erratically. 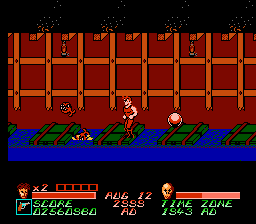 The final stage teleports you back to the future, where there aren’t any orbs but there are ridiculous amount of enemies that are obstacles in the way to the final boss. It’s easy to miss the fact that you’re supposed to find a robot spitting out stuff and then have him give you the rocket launcher that’s more or less necessary to beat the final boss. If you haven’t done this and you end up in the final encounter, it’s probably just best to reset the game even at this point.

There’s so much frustrating design in Time Lord that feels like one of those 80s games that were simply never meant to be beaten. But even the moment-to-moment gameplay isn’t very good, as hit detection is erratic even when things do line up. Your most potent moves are jump kicks, since they’re powerful and tend to put you out of enemy attacks – there are weapons like swords and guns and explosives but enemies can take so many hits to hit that they feel ineffectual. It also has a weird movement feel where walking diagonally down-left or up-right is much faster than walking forward – and considering the time limit, you’ll be taking advantage of this quirk a lot.

Time Lord is a mess of lost potential, the kind designed to make children go bald before their twelfth birthday. The only good thing about it is its beautifully rendered title screen, where animated lightning crackles along the logo when accompanied by some excellent-tier David Wise music.

Master Chu and the Drunkard Hu