Irem’s Metal Storm one is of the many unsung games of the NES that showed what the system is capable of. While the company gained a notorious reputation due to the punishing difficulty of the R-Type space shooter series and the Famicom-only horror platformer Holy Diver, Metal Storm is actually a fair game that provides the whole package: great aesthetics backed by fun gameplay that isn’t quite like any other 2D action title out there. There exists a short backstory which is as follows:

The year is 2501, and the dawning of a new century has brought mankind to the brink of disaster. The powerful LaserGun on the planet Pluto’s battle station “Cyberg” is wreaking havoc. It was originally designed to protect Earth from hostile aliens, but, due to a computer malfunction, is systematically destroying all the planets in the Solar System! Most recently the Earth Nation watched helplessly as Neptune exploded.

The system’s self-destruct device could stop the LaserGun, but it has mysteriously jammed and is aimed at Earth. Even if the device can be manually activated, there is still only a slim chance that Earth can be saved. Your mission is to enter Cyberg using the most sophisticated weaponry available, the M-308 Gunner, and unlock that self-destruct device! 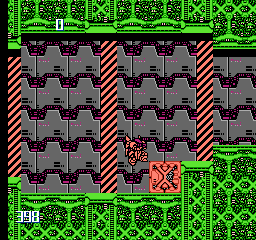 These two paragraphs promise a science-fiction actionfest, and Metal Storm‘s primary tenet of design is future technology. Your protagonist, the M-308 bipedal gunner robot, fights against the many different mechs guarding the core of the Cyberg station. Every single thing is mechanical with nary an organism in sight, with Cyberg itself essentially one massive Star Wars-infringing steel death globe, albeit one with a vast colorful interior. The graphics are well-detailed and incredibly bright, with smoothly-animated characters and backgrounds which utilize interesting scrolling effects when contrasted against the foreground. The only oddity is the orange-and-raspberry palette of your M-308 when the few pieces of official artwork portray its chassis as white, but the visual style is otherwise consistent and appealing. The music also fits in quite well, even if nothing’s particularly catchy. The first level tune is surprisingly upbeat for a semi-serious atmosphere, but later tunes cast a more dramatic mood the farther in you travel. 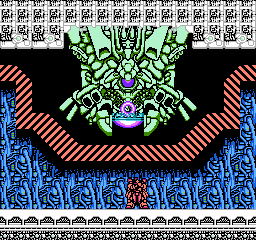 As for the game itself, Metal Storm plays akin to the sidescrolling run-and-guns of gaming’s silver age where your ammo is infinite and your powers considerable, but the slightest mistake would totally blow your game. The M-308 is the ultimate in robot obliteration, itself armed with a fast shooting plasma cannon which it can fire in all four cardinal directions and hydraulics which allow it to jump quite high. The controls are absolutely smooth and easy to get ahold of, though it may take a bit of practice to get accustomed to running about on the ceiling. Metal Storm‘s primary unique mechanic is the ability to switch gravity at any time by holding up and pressing jump, and during reverse gravity, you can revert it to normal with down and jump. Your controls are exactly the same while on the ceiling, though you hold down for the M-308 to shoot “above” it. When you switch gravity, you cannot quickly switch again in midair and must wait until you hit the floor/ceiling before another reverse. However, you can reverse gravity at any time while jumping, and several points in later stages encourage you to go the maximum aerial distance you possibly can before making a necessary gravity swap.

While pretty easy to pick up and play, Metal Storm certainly takes some effort to actually beat. Considering this title was developed by the borderline masochistic Irem, no quarter should be expected from the developers. However, as far as other Irem titles are concerned, this one is actually pretty darn forgiving with unlimited continues, a password system, and not deluging you with enemies as R-Type would be wont to do. At the same time, it’s not a pushover and can get to be quite vexing in the later stages, particularly due to the M-308’s fragility against any sort of enemy contact. Seven levels in all must be beaten, none of which are too long but can certainly take some time to learn how to avoid certain enemies and environmental hazards. Your control of gravity becomes increasingly vital as jumps become trickier and resistance increases for each new level. 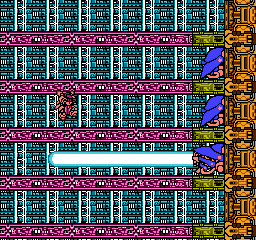 Naturally, as in any other NES actioner, there are several power-ups you can grab to help you on your mission, such as the “A” icon which provides an additional armor point and prevents you from immediately dying after a hit. “B” gives over 5000 extra points, “T” adds 100 seconds bonus time, and “C” obliterates all enemies on the screen. Three particularly important power-ups provide the M-308 with enhanced abilities, but only one of these can be active at any time. The most practical of these three is the “P” icon which upgrades your weapon to do more damage and penetrate through most solid surfaces. The “S” icon generates an energy shield in front of your gunner that deflects most bullets, although larger projectiles can break through it. The “G” icon turns the M-308 into a destructive fireball every time it switches gravity, useful for taking out pesky enemies who take advantage of the swap. Rare spots even contain 1-ups, although you will usually have to work and jump out of your way in order to get anywhere near these.

The enemies and deathtraps you must face offer a difficult variety of assaults that give the M-308 a run for its circuits. The first level alone gives you bipedal mechs which change their gravity alignment at the exact same time you do, so you’ll have to watch your head whenever you flip. More devious hazards loom in later stages, such as these gates that flip over every time you change gravity, but flying around the path of these gates automatically obliterates you. The entire second stage screws with your perspective and presents an improbable stage that loops infinitely as you keep falling downward or upward. One particularly evil level forces you to avoid obstacles while staying within the confines of an automatically moving cage which floats horizontally, vertically, and even diagonally for a short bit. The most baffling level by far consists of platforms which continually scroll up and re-appear through the bottom of the screen, massively confusing your perspective on what constitutes “up” and “down” and requiring you to think before making each valuable jump. Metal Storm‘s level design is arguably its strongest point as it requires the player to change the M-308’s gravity in increasingly strenuous situations, with each boss battle demanding your utmost of attention to survive no matter where your steel feet are planted. 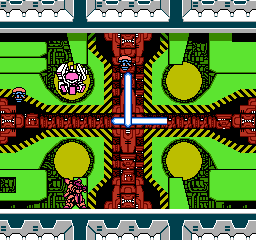 Irem often includes fascinating and/or innovative boss fights, and Metal Storm offers some tricky end-of-stage challenges which require you to think fast or fail. Nearly every boss battle demands appropriate use of your gravity-flipping abilities in order to survive, such as the first battle, an impressive giant of a machine with a weakspot which shift between three different points. You can only reliably attack two of these points while upside-down and you have to avoid ring projectiles while staying on offense. Later bosses include a wall of fluidly-animated laser turrets which force you to keep jumping or be vaporized, a floating mech with deadly satellites and crossing beams effectively dividing the room into quarters, a red robot that bounces around the aforementioned cage while two support robots attempt to zap you from above and below, and a very impressive transforming mech which has three different forms that fire different types of beams at you. The worst of the lot is the penultimate fight against three blocky platform robots whom you must destroy while also not falling off of them onto a perpetual laser surface which will vaporize you.

There’s very little bad that can be said about Metal Storm, offering a fantastic setting blended with some excellent running and gunning that doesn’t lean heavily on the gravity gimmick like a crutch, but instead naturally compliments the mechanic with some illustrious stage design. On top of all this, the challenge is tough but fair, contrary to many of Irem’s more brutal offerings for which they are better known. However, the difficulty here notches up on a fair curve which reaches its zenith at stage 6, but you feel less like the game is outright assaulting you for no good reason and more as if it wants you to make progress while stepping up your game. There’s very little bad that can be said about Metal Storm, with the only considerable flaw being the laziness of the game’s finale. The last stage tosses you into a boss rush with no differences between the previous six fights, and the final battle is a severe anticlimax where you have to destroy four targets in a “short” amount of time which is still pretty generous while facing no resistance. It’s a bit of a weak finish to an otherwise solid, if not short game. However, longevity is offered in the form of an expert difficulty after clearing it once, which brings the level up to something more murderously familiar of Irem’s familiar output. 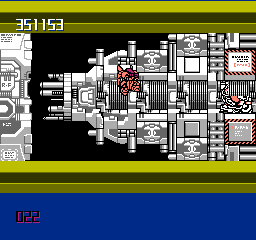 It’s too bad Metal Storm went mostly unrecognized by gamers, with its most notable accolade an unlikely spot on the cover of Nintendo Power #22. It certainly deserves more accolades than what little it got, but while sealed in the confines of obscurity, it remains one of the shining gems buried amongst the rubble of mediocre NES junk and should be played by any action gamers looking for something familiar yet different enough to stand out on its own.

North America got Metal Storm before Japan did, with the Japanese version being released more than a year later. It contains quite a few differences from the American version, such as additional text and an added intro cutscene, the big word “WARNING” flashing before each boss instead of “RED ALERT”, and the M-308 actually having white armor as depicted on the cover proper. Some of the backgrounds contain different colors, like the bright white background of the first level instead of the American version’s metal gray hue. The game plays exactly the same, albeit the sixth stage is even tougher thanks to the addition of electric barriers on the top and bottom which obliterate you if you graze them. It’s a bit more lavish than the American version, but whichever one you play, know that you’re getting one of the greatest NES experiences that not too many know about. 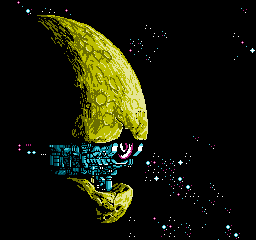 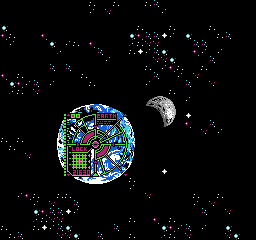 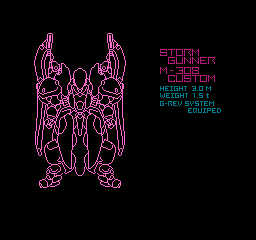 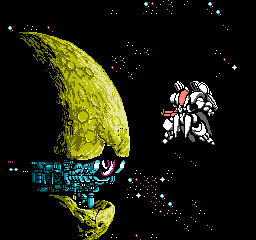 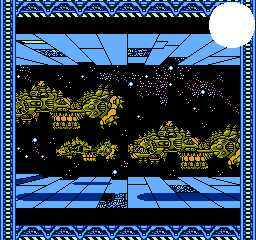