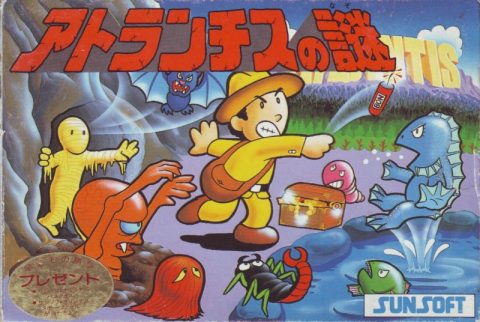 During the mid/later years of the NES, Sunsoft was known for creating a number of quality titles, starting with Blaster Master, all the way up through Gimmick. Before then, their track record is much sketchier. With the possible exception of Route-16 Turbo, just about everything made before Blaster Master wasn’t all that good, but the likes of Ikki and the Wing of Madoola still seem to hold some form of relevance among Japanese retro enthusiasts. At least that’s the case it seems to be on Game Center CX, where nearly every Sunsoft title (back when they were known as Sun Corporation) was thrown at poor Arino with a very low success rate. In fact, the very first game Arino had to play in the show’s second season (the first real season where the game challenge became the main attraction) was Atlantis no Nazo, an unassuming action-adventure romp that was probably chosen for how hideously hateful a game it really is. Arino managed to beat it, but only via specific instruction from a guide. Without that guide, welcome to Hell. 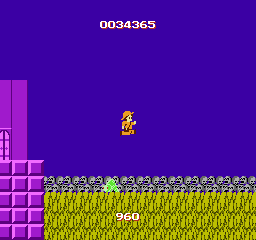 Atlantis no Nazo portrays the journey of an adventurer named Wynn, the least appropriate name ever considering how much you’re going to lose. He’s exploring an island made out of one hundred levels, certainly a record for the time, but the level structure is absolutely non-linear. You can’t just go from stage one to stage one hundred and play everything in between, but you have to travel around doors strewn about all the various stages to try and reach the end, making the game feel like something of an adventure game disguised as a platformer. Problem is, as an adventure game, it’s confusing and obtuse, and as an action game, it wants you to die. You only get seven lives, no continues, and Wynn has to deal with birds, bats, worms, skeletons, mummies, and other creepy-crawlies without a good weapon.

Wynn can’t stomp on enemies, nor does he have anything like a sword or a gun to attack with, but all he gets is a wimpy bomb that, while limitless, takes a few seconds to detonate, can only have one on the screen at a time, and is only able to reliably hit slow-moving enemies. These explosives have a more constructive use in the ability to reveal hidden doors, but as a straight weapon? You’re better off trying to jump over everything, emphasis on “trying.” Wynn has an extremely limited amount of air control, but compared to how Mario jumps, it takes a lot of practice to control where you land. Speaking of Mario, the bombastic advertising slogan Sunsoft attempted to pitch Atlantis no Nazo with was “Ano Super Mario wo koeta!!” This translates to something like “The game that surpassed Super Mario,” which is like claiming the Alvin and the Chipmunks film series surpassed Who Framed Roger Rabbit. Maybe it’s this flagrant stroke of hype that has made Atlantis no Nazo memorable today, if not just to be ridiculed for how it most certainly did not surpass Nintendo’s mustachioed moneymaker. 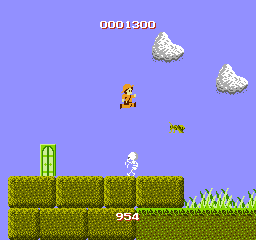 Atlantis no Nazo barely shares anything with Mario except the concept of warp zones and a strict timer. The timer in SMB usually isn’t so bad, but it’s a bit more troublesome with the game’s non-linear levels, especially since some of them have hidden doors that reward you slowly tossing bombs into every possible tile to see if it uncovers a warp. Some level transitions are really hard to find without that aforementioned guide, such as a secret passage in an early zone that looks like a completely indistinguishable pitfall that would normally kill you. Sure, go fall down this pit on the very small chance it’ll take you to a new level instead of losing one of your fragile lives!

Not every stage has powerups like mushrooms and flowers to help you take hits and toast enemies. You can find items in specific zones that reduce your likelihood of death, but they’re few and far in between, and some of them disappear if you bite it. This includes the two most useful things you can find: First is a “superbomb” that actually harms all enemies on-screen for every bomb throw, upgrading your puny weapon to hilariously overcapable. The other is a star that renders you completely immune to any and all enemy interference, but pitfalls will remove your invincibility privileges. It helps to be immune to the fireballs that the “final boss” spits at you (less a boss and more a gauntlet of projectile-spewing demon heads), but good luck avoiding the abyss until then! 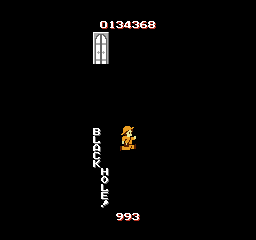 So this game hates you, that’s been established. But there’s one particular area that goes above and beyond the boundaries of sensible game design and overflows with so much venomous malice that you had to wonder if one of Sunsoft’s programmers was a misanthrope. If you somehow manage to end up in zone 42, all that exists is a door and the words “BLACK HOLE!” floating in an otherwise blank void. Wynn plunges to his death in a second and keeps plunging over and over until he’s out of lives, and there’s crap-nothing you can do about it. The “BLACK HOLE!” is a zone that only exists to instantly kill you after god-knows-whatever minutes you’ve spent clawing around for the exit, only to instantly lose because you took a wrong turn at Albuquerque without realizing it would lead to your unceremonious death. This is like the “murderboat” in King’s Quest V where that jerk Cedric doesn’t bother to tell you there’s a hole in the boat until it’s already sailing, but that would only take a few seconds or minutes to recoup depending on when you last saved. Atlantis no Nazo has no passwords or even continues, so if you happen upon the BLACK HOLE!, all you can do is make a note of avoiding the door in zone 29 that leads to it, unless you prefer to quit the game in disgust and never look back. 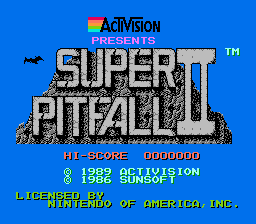 Atlantis no Nazo perhaps deserves some attention after all, if not only to talk about how awfully punishing and just plain awful it is, like Amagon and Super Pitfall. In relevance to the latter, Atlantis no Nazo had a prototype Western release in the works that was going to be named Super Pitfall II. There’s something ironically hilarious about a “game to surpass Super Mario” being sold as the sequel to a very poorly-rated entry of the Pitfall series. It’s unknown why the game was cancelled for Western release, but this is one case where people are lucky to miss out on an import, for it is not a hidden gem, but a cursed artifact that brings doom and misery upon those who behold it.