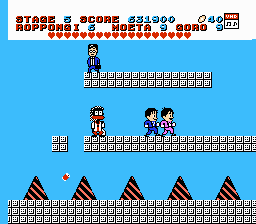 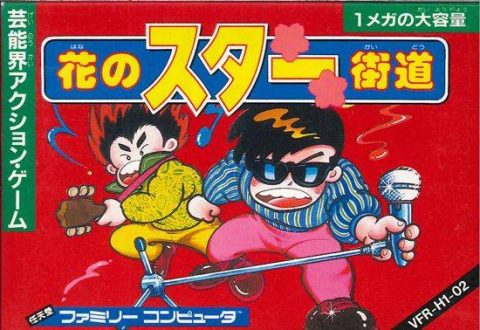 In the Famicom game Hana no Star Kaidou, you take on the roles of two fictional musicians – Moeta Hatano and Goro Toyota – as they run around and try to become famous. Most of the locales are placed in Tokyo, even though some parts seem to be directly inspired by the Mushroom Kingdom, but the eventual goal is to reach New York City. To catch of the game is, you control both characters at the same, with a single D-pad. Conceptually this might not sound terrible – after all, the charming Famicom title Binary Land had the same basic idea. However, while that was a simple puzzle game, this is a side scrolling platform game. 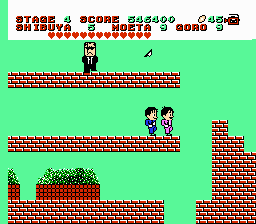 You have some slight control of how close the two characters are. Press up, and your characters become glued together; press down and they go apart. Now while this might have worked in a less action oriented game, here you’re expected to jump over gaps, onto platforms, avoid enemies and their projectiles. With a single character this might be difficult, but with two characters it’s nearly impossible.

The particulars of moving two characters at once is a problem in and of itself, but the game’s infuriating structure makes it far more devious. Much of the game involves around collecting items. You’re equipped with projectiles – music notes – which will stun an enemy. If you hit them again, they’ll die, but if you run over to their stunned body, you’ll get a random item. Sometimes, anyway. Sometimes, when a fallen enemy spawns an ugly female fan or a black person (yikes), trying to “collect” them will kill you. If you dawdle, the foe can also wake up without warning and also kill you. Additionally, both of your characters need to be on the same level to get an item to spawn, so if they’ve ended up on different parts of the screen, it won’t work. Furthermore, projectiles will fall from the sky, which won’t directly harm you, but will take away both the level objective item as well as depleting your record supply. 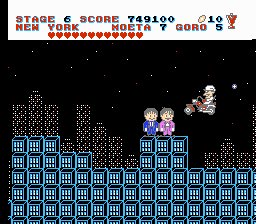 And were these problems not enough, the game features maddening, maze-like level designs, mixed with cryptic objectives, usually delivered in quasi-English at the start of the level. The game doesn’t have any in-game map, so there’s no way to know what street connects where beyond mapping out the levels by hand.

The goal of each level is seemingly arbitrary and can be anything from shooting at a block somewhere in the level to collecting an item from an enemy. Once you manage to somehow figure out what needs to be done, you need to make your way to the end level building, which is a huge maze. And you have to pretty much stun and search everything, because not only does the game require you to have item X when you reach the goal, but also a number of yellow records. If you don’t have the correct amount, then going to the goal will simply kick you out of building. Additionally, you’re on a time limit, so standing around will drain your health and eventually kill you. This is an insane design decision where every level consists of not one, but two obtuse mazes.

The maze buildings are humongous, with many screens and dead ends leading in every direction. Trying to get through these while being timed is rather difficult, but made exponentially worse by several factors. For example, the screen will only scroll up or down if both of your characters are on the same elevation. This can lead to many deaths trying to position them correctly. 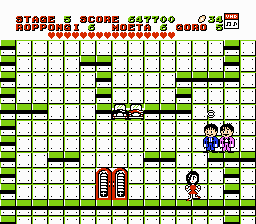 Hana no Star Kaidou is a slow moving, cumbersome experience that controls badly, where ten minutes of fighting your way through a maze can be immediately undone while you’re standing on the ledge right next to the goal. It’s cryptic, badly designed and insanely repetitive. Which is a shame. Using two characters to attack in two different directions at the same time, especially with maxed out weapons, seems like it could be really fun, in a completely different game. Similarly, the enemies, despite being rather gross stereotypes at times, are really wacky and unique, and so it’s a shame fighting these is made into such a chore. Otherwise, the game is pretty much unplayable without a walkthrough or playthrough video, and even then it’s an exercise in horror.