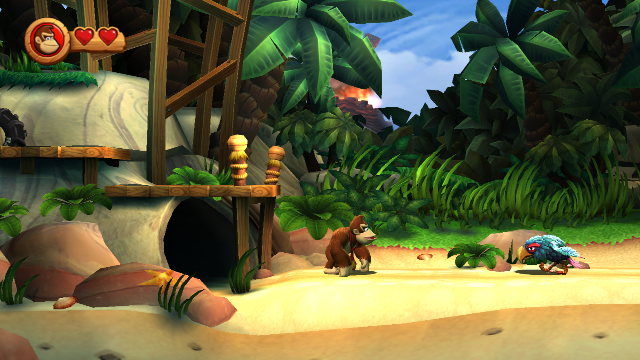 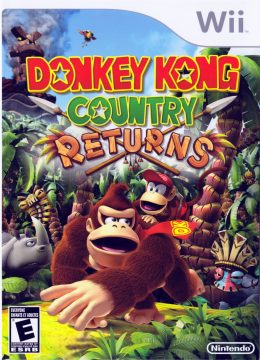 Jungle Beat, while a very pleasant surprise in its own right, was merely an aside to the Donkey Kong platforming saga. Seething underneath the surface of every gamer who cut their teeth on 16-bit platformers was a longing for a return to form for the wayward gorilla and his adventures. And that’s exactly what Nintendo promised in 2010 when they revealed the next Donkey Kong game—the strategically named Donkey Kong Country Returns.

The game’s announcement was accompanied by a fairly impressive trailer showcasing 2D sidescrolling platforming action and brief glimpses at some of the game’s show-stopping set pieces. But the title itself was the most important part of the reveal. They could’ve called it “Donkey Kong Returns”, “Donkey Kong Wii”, or anything really, and the game would have sold just as well. But the fact that they stuck the “Country” in there gave the game an entirely different level of significance. With that simple word, Nintendo was deliberately trying to resonate with a particular kind of gamer, a kind of gamer they’d scarcely acknowledged for nearly 14 years. Hell, Miyamoto himself had expressed displeasure with DKC over the years, casting it off as if it were something he were embarrassed of. 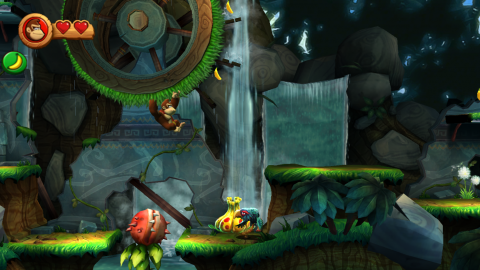 But something had apparently changed in the intervening years. Perhaps Miyamoto realized that DKC wasn’t all that bad. More likely, however, he probably realized that a dollar from a gamer who appreciated his art form was worth the same amount as a dollar from a gamer who paid for a brand name, and for the 80s-born adolescents who were now approaching their 30s, Donkey Kong Country was a brand that had a growing sense of latent desire associated with it.

Starting up a game of DKCR, for a DKC fan, is pretty fantastic. The game starts off with the same map theme as the original game, and seeing an actual world map these days is always nostalgically pleasant. Going into the first stage, you start inside DK’s hut as the opening drum beats of the classic Jungle Groove begin to play. It’s 1994 all over again, except with modernized 2.5D graphics. As you press on through, running to the right, jumping on various critters, all seems well. The game flows nicely, and each stage is punctuated with some great moments, whether they be parts of the stage tearing away or crumbling, or a particularly harrowing sequence of leaps and bounds over a bottomless pit. There’s a greater dynamic to everything than in any of the games before it.

The visuals are gorgeous, and the levels are substantially more detailed than they were in Jungle Beat. The depth provided by the polygon landscape allows the players to be shot out of barrels into and out of the background, so the levels feel like more than just a straight line. In addition to mine cart levels, there are a handful of stages where you fly on a rocket barrel, where you need to continually press the A button to maintain altitude while avoiding crashing into the scenery. 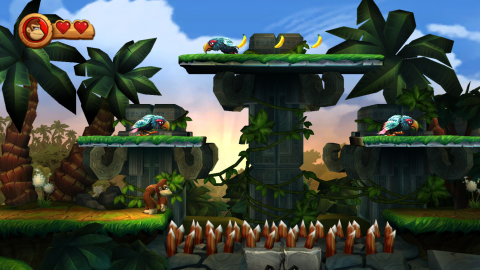 There have been some other small tweaks from the SNES games. Donkey and Diddy have a greater sense of weight and more inertia – it’s not quite to the levels of Super Mario Bros., but it definitely feels slightly different than before. There’s also a small life bar, with Donkey Kong being able to take two hits, and can absorb two more when Diddy is riding on his back. When Diddy is riding along, you can use his jet pack for a small double-jump burst. In addition to rolling, the players can smash the ground with their fists (to hit buttons and smash certain things), use their butts to pummel enemies from below when jumping, or duck and blow a gust a wind (handy for putting out enemies on fire and other assorted uses.)

Unfortunately, Nintendo has a proclivity of forcing its console gimmicks on their users, and Donkey Kong Country Returns is no different. In order to do any of these maneuvers, you need to check the Wiimote/Nunchuck, instead of just pressing a button. 2D platformers like this require precision, so forcing waggle in cases like this was an incredibly bad decision. If you have a modded Wii, you can install a program called Ocarina, which allows you to remap the function a button, which makes the game much more playable. But resorting to hacking a game because Nintendo thinks they know better when it comes to “innovative” control methods is just ridiculous.

The collectibles and unlockables from DKC2 and DKC3 return, to an extent. Collecting all of the K-O-N-G letters in all stages in a World will unlock the temple, which will grant a Rare Orb. Collecting all of the Orbs will open up a bonus final level. Additionally, there are golden coins, which can be used to purchase helpful items, like extra lives, from Cranky Kong. Puzzle pieces are also scattered around, usually hidden out of sight. 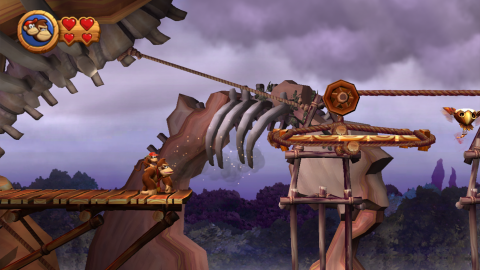 There is nothing wrong with DKCR on a surface level. As a platformer, it’s incredibly solid, well made, and quite a bit of fun. It’s pretty, the music is catchy (though nothing compared to the work of Wise), and the mechanics work well (outside of the waggle). It’s slightly harder than it needs to be at times (though it includes a “Super Kong” guidance system to work players through difficult areas, similar to New Super Mario Bros. Wii), and the fact that you lose a life for each player every time you die in a two-player game is a bit ridiculous, but nothing game-breaking. And yet there’s something mystifyingly disappointing about it – some magic or essence it fails to capture. All the pieces are there, but the adhesive holding it all together is… somehow… different.

One of which is the fact that there are no Kremlings. K. Rool and his horde are removed completely from the franchise here. Your enemies this time around are a far less engaging band of demonic musical instruments, the Tiki Tak Tribe, that take control of DK Isle’s native wildlife. Another issue is that there are certain classic DK elements missing, like the soothing break in the tension offered by underwater stages, which are absent here. And further still is the fact that in spite of all this missing, DKCR feels too much like a retread of the first DKC, with many elements – minecart stages, factory stages, much of the soundtrack – ripped directly from the original game’s guts and waved in your face with much fanfare while offering only the vaguest tip of the hat toward the two vastly superior sequels and all the implementations they brought with them. Retro’s work with Metroid Prime felt so reverent, but there’s something not quite right about the DKCR experience, as if the development staff knew about DKC and studied it, but didn’t really understand it enough to create something that really feels like an evolution of the series. 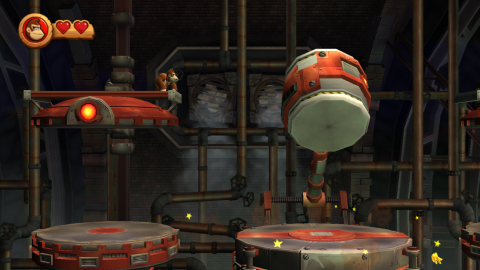 So while Donkey Kong Country Returns is a disappointment in these ways, it’s still nonetheless a solidly entertaining title, and as a 2D platformer, acts as a decent alternative to New Super Mario Bros. Wii.

In 2013, the game was ported to the 3DS by Monster Games. They did quite an excellent job of it too. The resolution is lower due to the smaller screen, but otherwise most of the visuals have been preserved, with only incredibly minor differences. The only downside is that it runs at 30 FPS rather than the butter smooth 60 FPS of the Wii version. The biggest improvement is that it uses traditional controls for the rolling and stomping, so it’s much less of a pain to play. There’s a whole new World, the Cloud World, after obtaining all of the Orbs. The Golden Temple level, previously the only bonus stage, is now the last area of the Cloud World. If you don’t want to collect the K-O-N-Gs in every level, you can purchase the Rare Orbs for 50 Golden Coins instead. Finally, a “New Mode” has been added, to make the game slightly easier. This gives Kongs three hearts instead of two (so you can take six hits with Diddy along), as well as granting a few extra items in Cranky Kong’s shop, including items to absorb hits when on the mine carts and rocket barrels, and balloons to save the player from pit deaths. 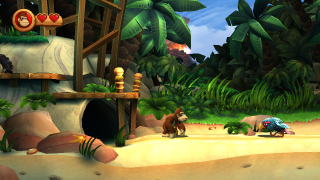 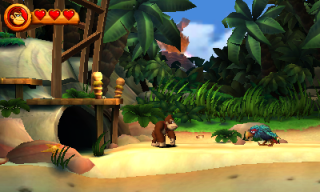