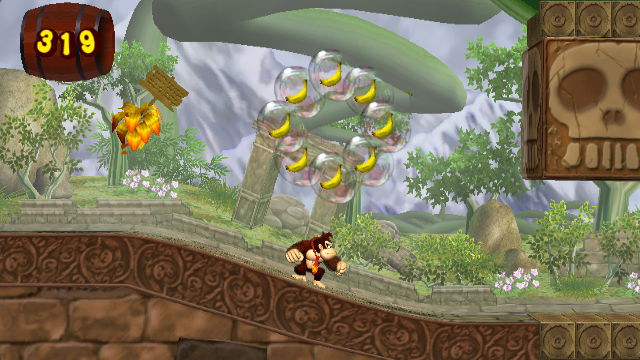 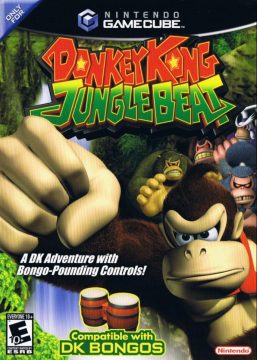 For the second time since his grand console revival in the 16-bit era, Donkey Kong slipped off into the darkness. The games bearing his name still made appearances on handhelds in various forms, and occasionally had their names dropped in print and digital publications, typically in lists of games running the gamut from “Best Ever” to “Most Overrated”. But, for the most part, DKC was a relic that was rapidly fading into mere memory.

Donkey Kong Country was ten years old before something resembling it emerged, and it emerged in a very strange form. As with all of Nintendo’s properties, Donkey Kong eventually made his way to the GameCube. Nintendo wanted to put a unique spin on the franchise rather than just squeeze out another platformer, thus we got Donkey Konga, a rhythm game utilizing a new peripheral created just for DK’s GameCube outing-the bongos. 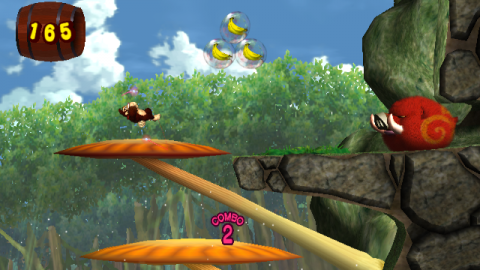 It was a fun distraction, but hardly an experience that would sufficiently sate a fan looking for the next big Donkey Kong experience. A few years later, Nintendo would strike a compromise between the yearning of their fans for a proper Donkey Kong game and their insistence on using gimmicky peripherals. They’d create a DK platformer evocative of DKC using the bongos.

Yes. Nintendo EAD Tokyo (who would later go on to develop the Super Mario Galaxy games) created a simple yet brilliant mechanic to make this possible. Traverse a Kingdom consisting of two sidescrolling stages tapping the bongos to move right or left, hitting both sides simultaneously to jump, and clapping in front of the microphone to perform a clap shockwave, which can be used to attack enemies. As you work your way through the stages, you collect bananas, and the act of collecting a banana is called a “beat”. Performing particular aerial feats gives you a multiplier factor, and the more aerial maneuvers you perform before touching the ground, the more beats each banana is worth. 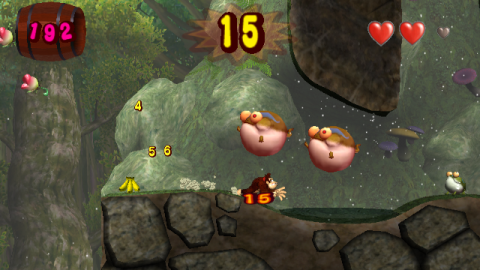 Beats are more than just a score counter, however. They’re your life meter. After the two sidescrolling stages in a given Kingdom, you’ll face a boss, and you’ll have to survive on the life meter you have left. Each time you get hit, you lose some beats, so you need to be very careful throughout the sidescrolling stages if you want to have enough health to take down the boss. If you keep dying at the boss fight, more than likely, you’ll have to replay the Kingdom and try to get to the boss with a better beat score.

At the end of each Kingdom, your remaining beats are tallied, and if you have enough left over after the boss fight, you’re rewarded with crests (silver, gold, and platinum). Crests are used to unlock new stages, allowing you to progress. All in all, Jungle Beat is a pretty lengthy experience once you unlock everything and will give you every bit as much of an adventure as classic DKC. It also functions very well as a classic score-attack type game.

The sidescrolling stages are incredibly fun and often present unique and exhilarating set pieces. Trying to see how long you can keep your feet off the ground so you can keep collecting bananas at a higher beat rate is a constant source of tension and keeps the game challenging every step of the way. The boss fights at the end of the sidescrolling stages are also incredibly enjoyable (although there are only 4 different bosses really that get slightly augmented in each Kingdom). 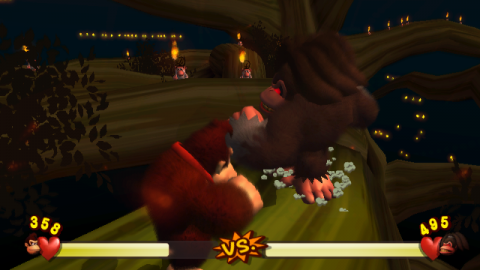 On top of all that, DKJB is simply a beautiful game. There is a great wealth of detail in its backgrounds, and the character models are impressive. The music, while not terribly memorable, is energetic and catchy, and the instrumentation reacts to what you’re doing, with tracks dropping in and out if you’re doing well.

Jungle Beat was rereleased on Wii as part of the New Play Control! series. Oddly enough, this version of DKJBinverts the traditional New Play Control! scheme and de-gimmicks it quite a bit. With the bongos not being compatible with the Wii, Jungle Beat now plays with more traditional controls, using the Nunchuck’s stick for movement, the A button to jump, and the shaking of either the Nunchuck or the Wiimote to clap. The transition is rather smooth, and more traditional gamers (or serious fans of DKC) might want to negate the GameCube version entirely to have a more familiar platforming experience here. 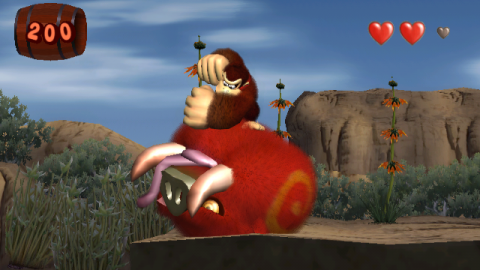 Some of the mechanics have changed a bit too. The GameCube version was pretty easy, probably to account for the fact that the bongo controls were not terribly accurate. Originally when taking a hit, you’d lose a small number of bananas. Now, there’s a traditional three heart life meter, and you can take three hits. You also have a limited amount of lives. However, bananas still function as health during the boss battles. The range of the claps isn’t as gigantic either, so you need to be a bit closer, and face in the correct direction. You no longer need to obtain a certain number of crests to move onto the next level, as it will happen normally when you beat a boss. However, obtaining all of the crests is necessary to unlock certain optional stages. Some of the levels have been switched around too, a new boss rush option has been added, and the game supports 16:9 widescreen.