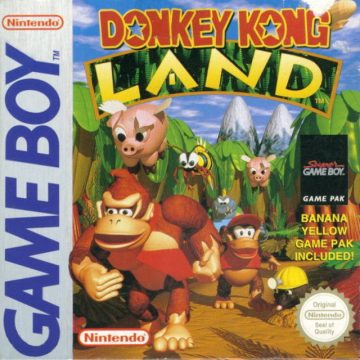 Donkey Kong Land‘s story involves Cranky Kong challenging Donkey and Diddy to make it through an 8-bit game, a partial jab at how games have been getting easier and easier since the 8-bit days. Cranky gets King K.Rool to steal all of Donkey Kong’s bananas again and makes Donkey and Diddy go through four completely new worlds to collect their bananas and beat up a lot of kremlings along the way.

One of the main differences between this portable version and its big brother is, of course, the monochrome graphics. Rather than redrawing them, it looks like the developers took the color graphics, reduced them to the four shades on the system’s palette. As a result, they look overly busy compared to the typical Game Boy title. Furthermore, the camera is extremely zoomed in due to the low resolution, which makes action feel cramped and a bit jerky. All three Donkey Kong Land games have this problem, and though it can be a bit frustrating at times, it doesn’t completely ruin the experience. Game saving, however, is handled very poorly. In order to save a game, you have to collect all four KONG letters as you go through a level. Sometimes they’re hidden pretty well, making things more frustrating than they should be. It would have been nice to have clear save points every so often.

Some other strange changes include making the extra lives measured in hearts at the bottom of the screen, Kongs teleporting away instead of following each other when you have both of them, and the animal helpers being reduced down to Rambi the Rhino and Expresso the Ostrich. Bonus games are changed too. You can collect Kong Coins throughout levels and secret rooms. They’re used for the bonus game, which has you collecting more Kong Coins for extra lives.

There are four worlds, the first one being on snowy mountains and a pirate ship, the second being mostly underwater and on a beach, the third being in caves and rocky mountains, and the fourth is a huge city. The city is notable because the instruction manual implies that it’s where Cranky Kong (who according to Donkey Kong mythos is the original Donkey Kong) fought Mario on a construction site. The bosses are a bit different, as none of them are behemoths that take up a quarter of the screen like in the console games. Even though they are not nearly as intimidating, they show a surprising amount of creativity and are all unique to the series. The final boss is the only exception, as it is a simplified version of King K. Rool from Donkey Kong Country.

Donkey Kong Land also has a few completely new level designs, obstacles, and enemies to throw around. During one level, you go through cliffs full of jagged rocks. As you go, rocks fall out of holes and try to crush you. There is nothing like this in the first Donkey Kong Country and it shows that a good amount of creativity went into the levels. Another obstacle that is exclusive to this game is the Swirlwind, a tornado that will hurt you if you run into it, but can be bounced on like a tire and will follow you to let you continue bouncing on it.

David Wise and Graeme Norgate converted some of the music from the SNES game, and added a number of new tracks. While obviously the Game Boy couldn’t replicate the sampled music, they still put the Game Boy chip to excellent use, with some catchy tunes that manage to capture the wonderous atmosphere with much less powerful hardware.

With all the cool and new things here, there is one very unwelcome glitch that is sadly present in all three Donkey Kong Land games. The game’s scrolling lags sometimes when you’re falling and can sometimes lag enough that the game thinks you fell down a bottomless pit if you fall off screen. It doesn’t affect the difficulty too much, but it does make some parts of the game more frustrating than they should be. Rare was nice enough to build levels so that you can get around easy enough without running into the glitch too much. If you can put up with the glitch and play by the level’s rules instead of trying to look for shortcuts, it isn’t too bad, though. As the Donkey Kong Land series goes the glitch becomes less apparent and less of a problem, but they’re still persistent. Oh well.

Donkey Kong Land is supported by the Super Game Boy and has color added to it when used with it. The color is also present when playing on a Game Boy Color or Game Boy Advance. It was also released in Japan under the name Super Donkey Kong GB.