While DKC2 was preluded by immense hype and released to glowing reviews, DKC3, conversely, had a lot of bad mojo stacked against it. The most glaring issue was its release window – DKC3 made its debut a little less than two months after the release of the Nintendo 64 and much deeper into the reign of newcomer Sony’s powerful grey rectangle. In the year that had elapsed since DKC2, kids had gotten a taste of this cool new drug called polygons, and overnight, concepts like sprites and side-scrolling seemed quaint. It was a completely different world, and another Donkey Kong was the last thing a kid would’ve wanted to get into coming off of the immense high of Super Mario 64, Resident Evil, or Tomb Raider. And for those not fortunate enough to find themselves in possession of Nintendo’s new machine, DKC3 was that dubious stand-in that lay in wait on Christmas morning: a gift from well-meaning parents living more frugal lifestyles than the ones dropping paychecks on the latest hardware. And it didn’t help that pre-release coverage of the game revealed that Dixie’s new companion would be a baby gorilla in light blue footie pajamas. Seriously?

But the most profound problem DKC3 had to deal with was the fact that it had to follow DKC2, and how exactly does one do that? 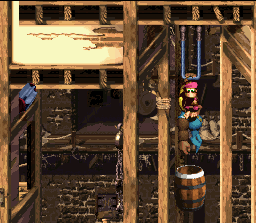 Rare’s approach here is actually quite admirable. They clearly understood that trying to bottle the essence of DKC2and use it as a commodity was impossible. DKC2 was DKC2, there’d never be anything else quite like it, and that was that. So instead, Rare went in a completely different direction, thematically and aesthetically, with DKC3, and while the stark contrast is initially troubling, the end result is a game that has its own distinct personality and is every bit as worthwhile as its predecessor.

Dixie Kong takes the lead spotlight this time, with Kiddy Kong now joining the team. He can roll, a bit like Diddy, and his size allows him to break through brittle walls and floors when thrown.

Other than the lead characters, the first thing one notices about DKC3 is the openness of the world map. On the overworld, you are no longer confined to treading along dotted lines. You’re free to move about in the ocean (which links all of the more traditional sub-maps together). This will come to be much more important than it first appears to be, but more on that later. As you get your boat and make your way out into the world, you’ll find that your options are extremely limited. However, as you press on through the game, you’ll acquire items that will give you access to more advanced means of transportation than your rickety motorboat, thus unlocking different parts of the world. 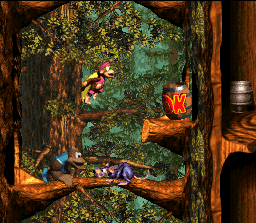 Apart from the openness, there’s also a lot more to do. DKC3 amps up the “Collectathon” concept quite a bit. Every stage now contains two Bonus Coins (replacing Kremikoins) won at corresponding bonus stages. There are also now Bear Brother Coins spread throughout the game, and these are used to barter with the Bear Brothers, one of each has set up a booth in every area and often lead you to the next new collectable featured in DKC3: Banana Birds. Banana Birds are small creatures found all over the world, usually in magical chasms that require you to complete a short and simple Simon-like color sequence matching game. Collecting all of them will allow you to see the true ending. DK Coins make their return, and there’s one in every stage. Here, they have a much more critical purpose. Collecting all the DK Coins in the game allows Funky to build the Gyrocopter, which gives you access to more of the aforementioned Banana Bird caves.

While on the subject of strange critters, all of the animal buddies from DKC2 return here except for Rambi, here replaced by Ellie the Elephant. Ellie can pick up barrels and move them toward her by creating a vacuum with her trunk, and she can also suck up water and use it as a projectile. 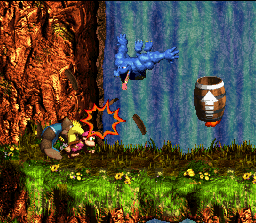 An open but staggered means of accessing the areas of DKC3 isn’t the only thing different from the beginning. From the outset of your adventure, DKC3 establishes a completely different mise-en-scéne from either of the two games that preceded it. There is something much softer, gentler, and more nuanced in the way DKC3 does its business, from the somewhat hushed palette and the more pastoral sense to the locales to the much less rhythmic and catchy but far moodier soundtrack. It’s curious, but DKC3 spends a great deal of its opening moments reminding you that it’s not DKC2, which goes against just about everything we know about how games are marketed. This sufficiently explains why DKC3 is the least popular or renowned of the three SNES games.

Speaking of locales, DKC3 sure is beautiful. Taking into account its immense level of detail, the variety of areas and design motifs, and the expert use lighting, fog, and other effects, DKC3 is a contender for the title of “Best Looking SNES Game”. DKC2 was pretty indeed, but DKC3 really perfects the art Rare had created for this trilogy, with beautiful sprite work, smooth, crisp animations, and layer upon layer of parallaxing in every background. In the stilt village areas, snow-capped mountains pierce the sky miles into the distance, and below them, a lake offers the mountains a distorted reflection. In the underwater levels, a cascade of colored corals paints every layer of background with a rainbow array that warps as the ocean currents twist our vision of them. In the mountain areas, every ledge is crowned with a beautiful arrangement of flowers and grasses bursting forth from the crevices of the rocks. 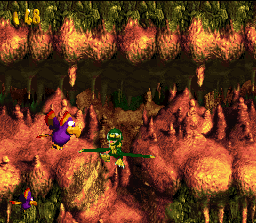 If the waxing on about the images in a game about apes collecting bananas and coins seems grandiose, it’s only because the images, regardless of the concept that spawned them, are indeed that spectacular. Yes, while some games can be considered technically and/or stylistically superior, like Super Metroid with its screen-filling bosses, Yoshi’s Island with its liberal use of scaling and rotating, and Kirby’s Dream Land 3 with its mimicry of a child’s crayon drawing, when it comes down to a game creating a believable landscape hewn from the living world, DKC3 takes on all comers.

On the contrary, Eveline Fischer’s soundtrack is much more complicated. It doesn’t beat you over the head with its triumphantness the way Dave Wise’s work on the DKC2 soundtrack does, nor is it as obviously spelled out as the spectacle of DKC3‘s visuals. Rather, it deceives you, initially disappoints you, then infects you with the brilliance you weren’t able to recognize at the beginning. It’s not the clearly apparent brilliance of the DKC2 soundtrack, but that’s exactly what makes it so profound. It starts right off with the map theme. At first, it doesn’t sound particularly extraordinary. But as it continues through its movement, there is a subtle groaning as the deeper notes are held for an uncomfortable amount of time. There is something strangely melancholy and sinister at the heart of DKC3‘s soundtrack. This aspect is most conspicuous during the particularly haunting treetop and underwater pieces, but it’s present even during more outwardly upbeat themes like the enchanted riverbank and waterfall stages. None of the music is particularly amazing, and definitely not up to the level of DKC2, but the sheer amount of character the pieces in the DKC3 soundtrack rank it closely. 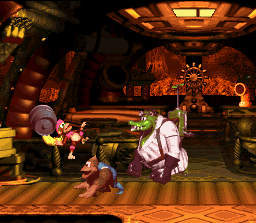 DKC3 was naturally rereleased on Game Boy Advance, but of the three, DKC3 has the most distinct handheld version. First off, this version is the most accurate to the original in terms of the visuals. The game also boasts a similar array of mini-games. Much bigger, however, is the fact that the GBA version has an entirely new area called Pacifica and a new boss.

But the biggest draw to DKC3 on GBA is the soundtrack. Rare had issues converting the SNES soundtrack to the GBA soundtrack, so Dave Wise was called back for this release, and has given the game an entirely new soundtrack. On its own, it’s some of the best work Wise has done and a lot of the pieces are on par with his work in DKC2, and moreover, the sound quality is incredible. This is one of the best-sounding GBA games ever. At the same time, the music is less ambient and the pieces often don’t fit the stages they’re in very much at all. Either way, you’re getting a phenomenal soundtrack. It just depends on whether you want overt catchiness or something more subtle and atmospheric. 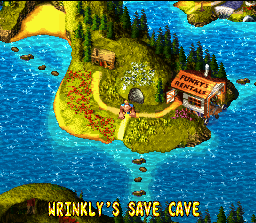 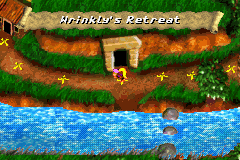 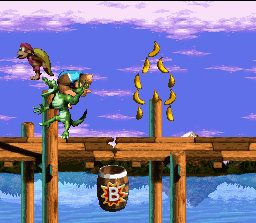 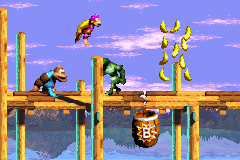 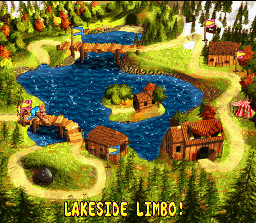 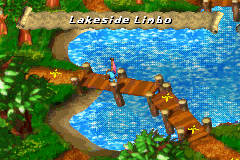