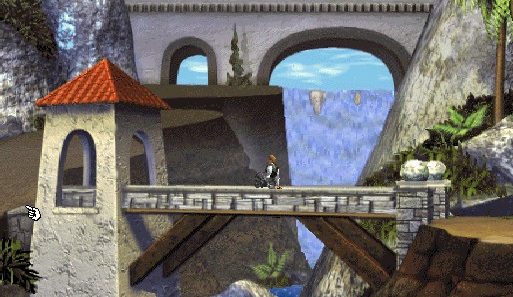 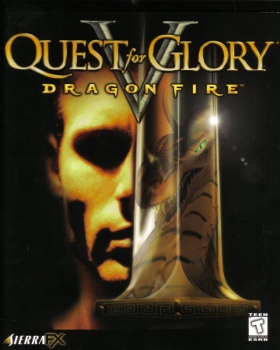 The four prior Quest for Glory games were released between 1990 and 1993, essentially giving gamers a new one every year. Unfortunately, by the mid ‘80s, the adventure gaming market was starting to dry up, causing Sierra and other companies to scale back. It wasn’t until 1998, five years after Shadows of Darkness, that the hero was finally able to travel to Silmaria for the fifth and final Quest for Glory title. Although the Coles had since left the company, Lori Cole was hired back to bring everything to a proper close. 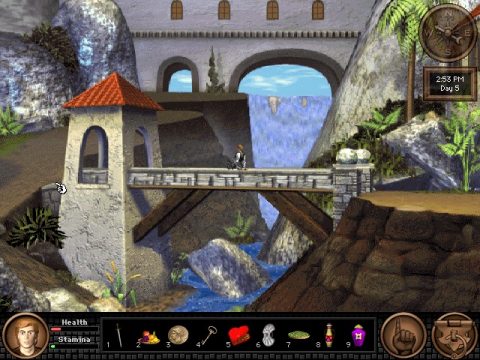 The land of Silmaria is essentially much like ancient Greece, and the land consists of an expansive piece of land (with a gigantic crater in the middle) and several smaller islands. They’re in the middle of a rather dire crisis, with their king having been recently assassinated. You, along with several other contestants, must take part in seven trials to determine who will become the next ruler of the country. Things get even more complicated when several of your opponents are murdered, and longtime pals Rakeesh and Erasmus end up poisoned at the hands of the wicked assailant.

The interface has been simplified quite a bit, with the usual icons removed. There’s the standard pointer, which allows your hero to move, use, talk, or otherwise interact with the world. If you right click you’ll change into “look” mode, allowing you to examine the scenery. Conversing works much the same as before, but the character portraits have been shrunk to postage stamp size windows on the right side of the screen, a huge step down from Quest for Glory: Shadows of Darkness. They’re computer rendered and look a bit on the ugly side, although at least the voice acting is still quality. For some reason the narrator isn’t voiced at all, with all of the usual descriptions reduced to a text window at the top of the screen. There’s also a new Swimming skill, since there are a few portions that take place underwater. 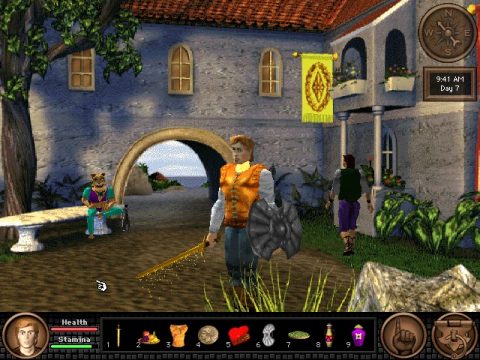 The graphics are a mixture of bitmap backgrounds and polygonal modeled characters. The scenery pans around as you move left or right, giving them a panoramic feel, and the camera slightly zooms in and out on the hero in certain areas. While this causes some distortion on the backgrounds, it does lend a bit of extra depth to the graphics. Still, the high res, computer generated bitmaps don’t quite have the quaint appeal of the pixel art or the hand drawn artwork of the previous games. The polygonal characters don’t fare so well either, but it’s hard to notice their boxiness most of the time, since the camera is usually pretty zoomed out. This is the only game in the series where your equipment actually affects how your character looks, which is a nice touch. Overall the visuals haven’t aged quite as well as the older games, but it’s not bad considering the usual standard for prerendered graphics in the mid-to-late ‘90s. It’s still a lot better than the third Gabriel Knight game, which used both 3D characters and environments, with rather disastrous results.

Much like Quest for Glory III, exploration is handled via an overhead map, although important locations are marked with little emblems. Through your adventures, you’ll find the usual mythical creatures, and be charged with raiding a Pegasus nest, fighting the three headed Hydra, exploring the city of Atlantis, and entering the underworld of Hades. At one point, you get to reconstruct a set of Icarus wings to fly over the landscape, but that obviously doesn’t last too long. Later on you can build yourself an airship, which makes traveling a bit less of a hassle.

There’s more emphasis on combat in Quest for Glory V, with the battle system being completely changed up. There are no longer any combat transitions, and all fighting happens on the same screen. It’s pretty simple – all you need to do is click on an enemy to fight. You can also use the keyboard to execute other types of attacks, or to defend, but it’s a pretty clunky way of handling things. Additionally, you’ll often need to fight several foes at once, and trying to target a specific opponent can get confusing, often resulting in your hero being assailed from all sides. You can run past most encounters, but make sure to stock up on tons of healing and stamina potions. There are also more weapons and armor to equip, making trading a slightly more important part of the game. You can also use healing items at any time, whereas previous games required you to run away before rejuvenating yourself. The autosave is gone, but there’s now a Restore option which will automatically restart you at the beginning of the screen.

The other major annoyance is with the pacing. In the older Quest for Glory games, you could simply ramp up the speed to the highest setting and dash all over the land, even on really old computers. Not here – the hero casually saunters from place to place. For instance, you could explore the entirety of Mordavia in less than a minute. Here, it takes significantly longer to make the rounds in Silmaria. You can double click to run, which makes things a bit faster, but in turn, drains your stamina. This isn’t a big deal when you’re just exploring the town, when you can just rest any time you want, but it does make combat pretty frustrating. Given how much you’ll need to fight, level up, trade in weapons, rest, and buy more stuff, it ends up feeling more tedious than the other games. Thankfully, there is an item that will transport you directly back to your bedroom at the inn, which reduces some travel time. 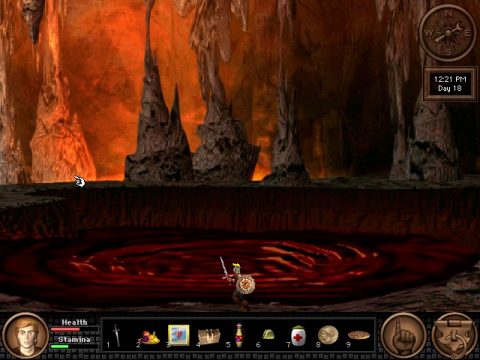 If nothing else, Quest for Glory V pays out huge amounts of fan service, collecting a number of major and minor characters from the previous games. You finally visit the Famous Adventurer’s Correspondence School, our hero’s alma mater, where you meet the mysterious F.E., the author of the magazines included with each copy of the previous games. Erasmus, Fenris, and Rakeesh all appear in the early stages of the game, having recommended our hero for the contest in Silmaria. Bruno, the nasty informant from the first game, also plays a pivotal role. Signor Ferrari and his informant Ugarte have somehow escaped from Raseir in Quest for Glory II and have set up a new Blue Parrot Inn. Salim, the hippie pharmacist from Quest for Glory III, ended up marrying Julanar, the tree lady from Quest for Glory II, and moved to Silmaria to set up an apothecary.

One of the contestants is none other than Elsa von Spielburg, the princess from the first game. What’s more, you can choose to marry her, if you’d like. There are a total of four potential brides, including Nawar, one of the harem girls from Quest for Glory II, that you only met if you were a thief; Katrina, your vampiric friend from Quest for Glory IV; and the famed elf heroine Erana. It’s a really cool idea to bring forth all of the major female characters from the series, but there’s not much of a payoff. There’s no real wedding scene and it only slightly affects the ending. 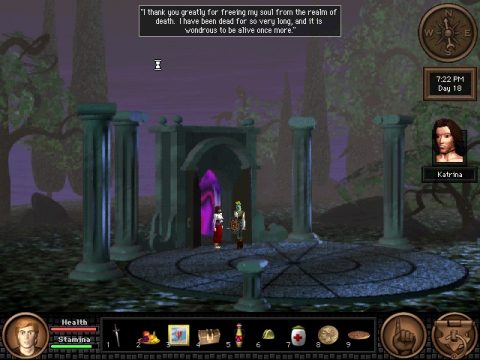 The music is very cinematic, using high quality orchestral style music that changes with the action on screen. It’s a big change from other Sierra games, and it’s sad that it doesn’t reuse any of the classic themes, but it also greatly adds to the sense of drama and adventure.

Quest for Glory V ends up focusing a bit too much on the tedious RPG elements, and not quite enough on the adventuring. Still, there are plenty of cool sights to see, and most of the humor is still intact. (One exception: death scenes just don’t feel like death scenes when there’s no music or goofy animation to accompany them.) Bringing all of the old characters together is a brilliant reward for longtime fans who have followed it throughout the decade, although it won’t quite mean as much if you haven’t played all of the previous games.

Like many of the other Quest for Glory games, Dragon Fire is a bit on the buggy side. You need to install one of the patches in order to complete parts of the game, and an additional fan made patch is required if you want to play in Windows XP. Before it was released, Sierra promised that the game would include multiplayer functionality (they even put out a demo with this) and the ability to play as two of the other contestants, Elsa von Spielburg and Magnum Opus. Alas, these features, along with the ability to use a bow and arrow (you can still pick up arrows, but only to sell) were cut from the game. Rumors initially spread that another patch would enable some of these, but the entire staff at Yosemite Entertainment, the branch that developed this title, was laid off shortly after it was published, so these plans never came into fruition. Thankfully, at least the Quest for Glory series got a decent send off, which is better than most other Sierra series.