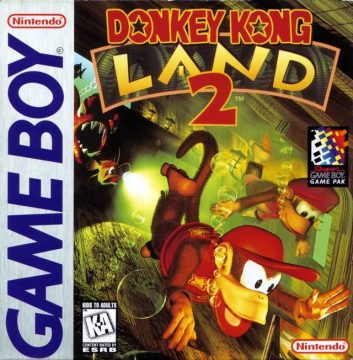 The second Donkey Kong Land is different from the first in many ways. While the first one was for the most part, its own game, Donkey Kong Land 2 is a remake of Donkey Kong Country 2, but sized down to fit into a Game Boy cartridge. Many of the levels are very similar to their console counterparts, but with some things cut and different music.

Many of the problems with the first Donkey Kong Land have been fixed or at least toned down for the sequel. Saving no longer requires you to collect all four KONG letters in a level. Instead you only need to collect two banana coins in any level and spend them to save the game at Kong College. It’s the same way saving is handled in Donkey Kong Country 2. Also, the camera’s movement is a lot smoother, though it’s still pretty jerky in some levels.

Most of Donkey Kong Land 2‘s levels are altered versions of Donkey Kong Country 2‘s levels refitted to the Game Boy. The difficulty has been lowered immensely. A couple of the hardest levels, Castle Crush and Haunted Hall, are gone completely. Castle Crush was replaced with an easier level, Danger Dungeon. This was because the technique Rare used to make the level unique, a constantly rising floor, was apparently too much for the Game Boy to handle. Haunted Hall was replaced with the laughably easy level Crazy Coaster. Worlds 2 and 3, Crocodile Cauldron and Krem Quay, have been smooshed together into one world, the boss of world 3 being cut in favor of the boss of world 2. In all fairness, the boss of world 2, a giant sword that shoots fire, is one of the better bosses in the series, so including him over the world 3 boss was probably a good idea.

Diddy and Dixie lose a key move too. In the console version, you can press the A button to put one monkey on the other monkey’s shoulders. You could then press Y to have them hurl each other. This was useful for making tough jumps or taking out powerful enemies. Since only one Kong can be onscreen at a time, this ability had to be cut. A few other extra features are gone too. You can’t talk to Cranky for hints, Swanky Kong is gone altogether, and The Lost World is only accessible once you collect 47 Krem Coins. In the console version, you could buy each individual level of The Lost World piece by piece.

Donkey Kong Land 2 is impressive as far as Game Boy games go, but it has its share of down sides too. Deep down it’s a port and not its own game. While the first game had its problems, it felt like a new and unique game, while this is a bit more of a downsized version of Donkey Kong Country 2. It’s status as more of a port than a standalone game diminishes the experience and makes it feel less original than its predecessor. Unless you really love handheld platformers or have to play every Donkey Kong Country game, the console version is a lot better in terms of both controls and presentation.

Another notable thing about this game is that it was the very first title Lee Schuneman designed for Rare. He would later go on and direct more games for Nintendo and Rare, his last one being Star Fox Adventures on the Gamecube. After that, Lee Schuneman worked for Rare under Microsoft and helped produce Perfect Dark Zero and Kameo: Elements of Power.