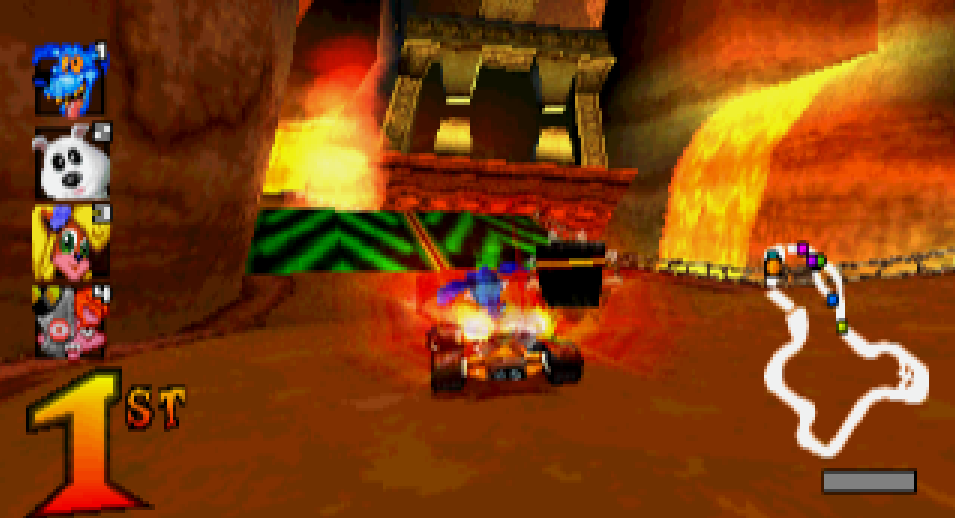 While Super Mario Kart created the kart racing genre, and Mario Kart 64 made the series a household name, it wasn’t until Diddy Kong Racing that the real craze begin. For years, however, the Playstation lacked a proper kart racing game in its sizeable library. The closest thing to scratch that particular itch was the Wipeout franchise, which while a fine series in its own right, did enough of its own thing that it couldn’t really be compared to Nintendo’s racer. And so, it would only make logical sense that the developers behind Mario’s biggest competition of the time would bring out one of his racer’s greatest rivals. For as many kart racers have been long forgotten, Crash Team Racing still stands as one of the very best to this day.

Crash, as well as his friends and enemies, have gotten together to take part in a friendly racing competition. Thankfully, before the racers begin to get weird ideas in their head like how to get their infant selves into the driver’s seats, an alien by the name of Nitrous Oxide shows up. Oxide proclaims he’s the fastest driver in the universe, and says that if Earth’s best drivers can’t outrace him, he’ll enslave the planet. That’s about as much justification as you can ask for from a kart racer, really.

There are fifteen playable racers gathered from across the series, with seven of them having to be unlocked through various means. In typical kart racer fashion, acceleration, top speed, and handling differ between the characters. Crash & Cortex are good all-rounders, for example, while previous bosses Tiny & Dingodile have amazing top speeds, but are kind of awful at cornering. There are a few surprising inclusions in the roster as well, like bosses Papu Papu & Pinstripe from the original game, who didn’t even so much as cameo in the previous two games.

The actual racing itself should be pretty familiar to anybody who’s played DKR and MK64. The biggest difference in mechanics are the various ways you can pick up some extra speed. Characters can put their kart into a drift by holding down one of the two provided jump buttons, and by tapping down the other one with good timing, you can pull off some turbo boosts that’ll let you get a bit of extra speed. Timing matters, however, as pressing too soon means you’ll miss a boost, and too long means you’ll end up in a spin. The tracks are often so curvy that you’ll need to master this technique to keep your speed up, and there are plenty of places where you can keep a constant boost going if your drifting skills are good enough. Hopping is also useful for leaping off of big drops, since falling large distances will give you an extra boost when you hit the ground, with more airtime meaning bigger boosts. It’s a pretty fun mechanic that’ll have you constantly scanning for places you can catch more air, and watching your racer taking the massive jumps that some of the courses feature is always fun.

About all of the powerups you’ll come across are clear equivalents for items found in Mario Kart, from the rolling bombs that work like green shells, homing missiles, potions that work like the banana peels, and an appearance from one of the tiki masks to serve as the Starman. Some of the weapons, however, have a few extra features that serve to give the game a little more depth.  Bombs can be detonated prematurely to hit any drivers that get too close to it, while the shield can be fired off ahead of you as a projectile. Some crates also contain Wumpa Fruit, and collecting ten of these will temporarily make your powerups extra effective. Despite the fact that they serve the same general roles as their MK< equivalents, CTR’s powerups never feel quite as dominating. It helps that the best powerups aren’t given out quite so freely as in other competing kart racers, so the best items seem to go more often to the people who actually need them.

All this is backed up by just how polished the entire game is. In some ways, actually manages to outdo its competition of the time entirely. The handling is incredibly tight, and playing without the use of an analog stick doesn’t hinder the controls in the slightest. The tracks also feel somewhat more narrow than other kart racers of the era, and this helps to keep characters pinned together where the various powerups you’ll collect can really be put to use. The pacing feels somewhat faster and a little more chaotic than other contemporaneous kart racers of the time, too, partly due to how often anybody can grab a hold of a powerup crate and try to force their way back into the competition. There’s just a certain intensity to the racing that never really quite lets up. It says a lot for this game that more than one of the mechanics introduced here ended up in later editions of Mario Kart.

If anything really helps CTR stand out, however, it’s the vertical element to the racing, where you’ll constantly be hopping across gaping pits, over hazards, and bouncing primed TNT crates loose from your head. The 16 different tracks the game offers all make great use of this, and almost all of them have some cool secret where you can leap off of the track and onto a hidden shortcut. Every level has enough shortcuts and the occasional alternate route to make them worth exploring, and they all have their own unique feel. Some offer flat, hazardless terrain to perfect your drifting on, while others might have big bumpy roads to catch lots of jumps on, and still others have tight corridors that force the racers to bunch up with one another, making it easy to land hits with your powerups.

In terms of single player content, the game offers a “cup” mode, which functions as  the traditional set of races where you compete against AI racers for points. The real meat of the game, second only to its multiplayer features, is the Adventure mode, gently borrowed from Diddy Kong Racing. Here, you’re given a hub world you can freely drive around in, divided into different sections and with each containing a number of races. Winning will earn you trophies, which you’ll need to unlock further tracks, eventually unlocking a race against a boss you’ll need to finish to open the next section. The boss races aren’t generally as creative as the ones seen in DKR, however, as they’re simply a race against one of the game’s hidden characters on a track you’ve already seen, only with the boss you’re racing against throwing out weapons non-stop, with the occasional bit of rubberbanding.

Beating a boss will give you a key, not only giving you access to the next area, but also unlocking extra challenges in previous tracks. The CTR challenge makes you finish a race in first place while also finding three letters hidden across the track. A guide can be handy for these, since some of the tracks get so complex that you won’t always be able to find them all in time. You’ll also find bonus rounds scattered around the map, where you’re made to grab a certain number of crystals from one of the game’s battle arenas before time runs out. The Relic Race takes after Warped’s time trials, tasking you with finishing a track while smashing yellow crates to keep your total time as low as possible.

In typical Crash fashion, just beating Oxide won’t cough up the best ending. For that, you’ll need to finish every track in first place, do it again while finding all the hidden letters, and clear all the bonus rounds, none of which are particularly easy. Doing this will unlock five cups you’ll have to clear by finishing a series of races with the highest score of all the AI racers, although the fact that winning these unlocks extra characters somewhat makes up for it. After you’ve done that, you’ll need to get all the relics from every track by reaching the best times. Then, and only then, are you allowed to qualify for the true ending by challenging Oxide once more, although at least he’s not quite as much of a pain as Wizpig in either case.

Your reward for all of this is another epilogue detailing the fates of each of the game’s racers, and given the state of the franchise from this point onward, it comes off a lot more poignant this time around. You’re then shown the “Naughty Dog Scrapbook”, an FMV showing off all sorts of concept art and promotional material for the previous three games, E3 photos, Japanese promotional images, and ending with images of Naughty Dog’s staff itself. It’s a worthy reward for all the work the game puts you through, although it’s once again bittersweet, given that it’s the definitive ending to the final game the original Crash team would bring forth.

Of course, just about nobody buys a kart racer for its single-player portion, and while the AI is generally less brutal than the worst of Mario Kart’s computer racers, you’ll eventually long for actual humans to play with. Thankfully, CTR is probably one of the finest experiences you can have with the PlayStation Multitap, offering smooth four-player gameplay for both racing action and the now traditional battle mode. It’s probably the best game for multiplayer action on the whole system, only really rivaled only by the likes of Bomberman. Truthfully, it’s somewhat amazing that the PS1 can handle that much action at once, although if you look closely, the tracks lose a little detail when there’s more than one player involved. (It’s forgivable, given the technical wizardry that was probably required to make it work at all.)

The graphics, while not quite up to the incredible standards set by previous Crash games, are still more than impressive for the PlayStation hardware. Each track is completely distinct from each other, and all of them do a great job at applying the series’ Avery-esque art style to a racing game. The soundtrack’s also a little catchier than previous games, since the tracks are a little more intense to fit with the frantic racing action. In a nice touch, every character gets a few different vocalizations for the different things that happen to them, a good number more than you’d hear in MK64. While the lines eventually start to repeat themselves, the voice acting’s generally just good enough that they never get completely annoying.

In a genre where Mario Kart stands as king, CTR still remains as one of the only games that could have hoped to challenge it, and in some respects, actually manages to surpass that franchise. It’s a shame, then, that so few non-Nintendo efforts have managed to challenge it, with the only real rival being the more modern Sonic & Sega All-Stars Transformed. On the PlayStation, however, nothing else comes close.

As previously stated, this would be Naughty Dog’s final entry in the Crash series, before the franchise was handed off to a series of different developers, all of which would vary in quality. Naughty Dog would go on to create the original Jak & Daxter, which would put some of Crash’s mechanics into a more open sort of platformer, before moving into a very different direction entirely. Little more from that point needs to be said, although some of the post-ND Crash games are, at the least, still worth looking at.