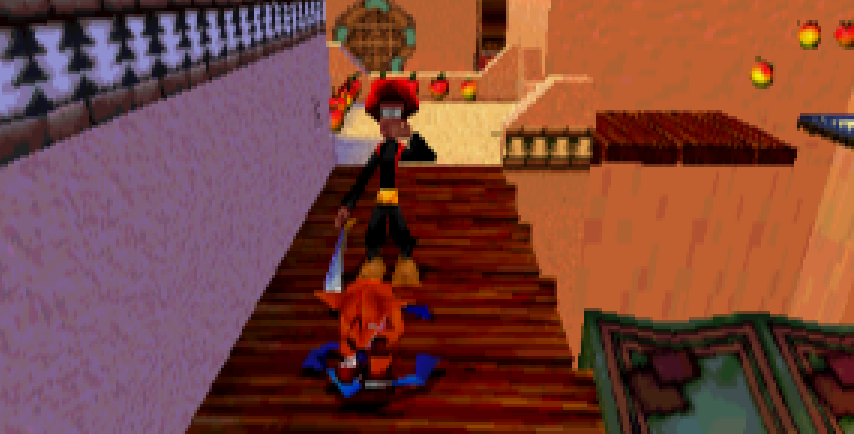 It’s the general rule, unless you happen to be Nintendo, that video game trilogies use their first game to establish their concept, their second game to improve upon it, and their third game to polish it a little. So it goes with Warped, a game that doesn’t really do quite as much to improve on the massive improvements its predecessor brought forth, but ot doesn’t really need to. There’s still enough in there to make it worthwhile, though, even if it’s not always quite as well rounded of a package as the previous game.

As it turns out, Cortex was, in a shocking twist, being evil, and so with the help of Crash, Cortex’s former partner N. Brio blasts his space station down to Earth. The wreckage lands on an ancient temple, freeing Uka Uka, another floating tiki mask and evil counterpart to Aku Aku. Apparently, Uka Uka has been behind Cortex’s schemes this whole time, and he’s pretty unhappy that Cortex’s attempt to conquer the world using the power crystals has failed. With the help of time travel specialist and walking pun N. Tropy however, Cortex plans to gather more crystals from the past and future. After Aku Aku finally gains a speaking role to explain all this to Crash & Coco, the two bandicoots set off on a journey across time and space to get the crystals first.

In terms of basic gameplay, Warped doesn’t differ a whole lot from its predecessor. All the new gameplay elements, from the collection of crystals to all the new moves return here, exactly as they were in Cortex Strikes Back. From the start of the game, the biggest change is that you can finally see how many crates are left for you to smash with a press of the Triangle button, which means you never have to worry if you missed some by the time you approach the exit. On top of this huge quality of life improvement, Crash gains new abilities whenever he defeats a boss, each of which sees use in subsequent levels. The first power is an upgraded body slam, which you’ll now need to smash those stubborn, steel banded crates. Then there’s the double jump, which is followed by the tornado spin, which lets Crash spin for an extra long period, allowing him to glide gently through the air. The fruit bazooka arms Crash with an unlimited supply of Wumpa fruit to fire at his enemies, although aiming the thing is so unwieldy that it’s only really useful in a rare number of situations.

Finally, defeating Cortex unlocks the ability to let Crash run far faster than normal by holding down the R2 button. In typical Crash fashion, just beating the game isn’t enough, and besides an assortment of crystals and gems, 100% completion requires Crash to grab relics from each of the game’s levels. Each stage has three relics, and these are tied to the game’s new time trial mode. Once you enter a level you’ve already cleared, you’ll find a conspicuous giant clock at the entrance. After you pick it up, you’ll begin a time trial, where you’re tasked with getting to the end of a level as fast as you can. You won’t lose a life if you die, but there aren’t any checkpoints, meaning that screwing up requires you to start the level anew. You’ll also lose any masks you might have had with you. Finally, yellow crates will be placed all over the level, and smashing these will stop the timer for a few seconds, which can be invaluable for getting the best times.

Earning record times, and thus, all three relics a stage has to offer, is pretty much impossible without having the dash shoes. Still, the time trial concept is pretty fun, since it challenges you to keep moving and maintain your flow of movement as well as you can. The fact that you’re penalized so roughly for making mistakes makes them a little annoying, but they’re fairly enjoyable overall. However, while the new powers are nice to have, they never provide a really significant twist in the gameplay. You’ll come to rely on the double jump and the run ability the most, while the others are, sadly, pretty situational. At the very least, the game never really makes you backtrack to previous levels with your new abilities, except for the time trials.

The biggest twist is how many more gimmick levels are scattered across the experience to mix up the usual platforming gameplay. While the only time the previous game really diverged from what was seen in the original game were the handful of jetpack stages, here, there are a wide array of levels focused on some kind of new vehicle or environment. Each of these area types feel pretty unique from each other, and while this means their quality varies, it also means that the game stays pretty fresh as you progress. Generally, each of the five worlds has three levels focused on the usual Crash platforming, while the other two are gimmick levels.

The first levels the underwater stages, side-view areas where Crash dons scuba gear to search the ocean depths. These stages, while they’re hardly awful, feel a lot slower paced than most of the game. There are usually more branching paths and backtracking in these stages, and given how much of them involves carefully timing your way through obstacles, they often feel like they take longer to finish than most other levels. The problem is that the camera’s a little too zoomed in to see all that far ahead of Crash, so if you don’t take your pace yourself carefully, you’re liable to smack right into a hazard. Even when the game gives you a jet sub, with the ability to launch torpedos, you can’t even really go crazy with it, since pushing forward too quickly means you’re going to motor into something and lose your vehicle. It kind of harkens back to the original Crash, for better or worse, where speeding through stages probably means you’re going to get yourself killed.

The motorcycle stages set Crash in a highway race against a bunch of Cortex’s minions, with first place being required to earn the crystal at the end. Unfortunately, while these areas go by a lot faster, they’re also a lot more frustrating, especially once you get to their later incarnations. The bike has some pretty awkward steering that can often have you veering off the road or into an obstacle when you’re trying to take a curve, which can quickly lead to a bunch of your opponents veering right past you. Bumping into opponents only shunts them further ahead of you, as well, meaning that the only real way to succeed, especially on later levels of this sort, is to make sure you hit every single boost pad and ramp without making a single mistake. While you can’t lose a life in these stages, failure to win kicks you back to the hub, meaning it’ll probably take you several attempts to win. If the handling on the bike was just a little better, these would probably be pretty fun, but as they are, they’re probably the game’s weakest point.

The waterski areas are one of only a couple of level types where you control Crash’s sister Coco, who’s confined in this game entirely to gimmick stages. These particular ones involve maneuvering through a set course to grab the crystal, although, thankfully, you’re not forced to race for it. These are probably one of the better gimmicks on display, since they play a little more closely to a majority of the game’s style. The jet ski’s pretty fast, and controls far better than the motorcycle, which makes dodging and weaving through the many obstacles at high speeds a much easier proposition than the underwater stages. The only real source of frustration here is the jetski’s tendency to drift when you stop moving, which will occasionally drift you right into a hazard in areas where the water’s especially congested. On the plus side, these stages feature the prettiest water you’re ever likely to see in a PS1 game.

The final type of gimmick level is the aircraft stages, which play so differently from anything else in the game that they’re probably the most interesting of them all. In these areas, Crash or Coco ride an aircraft around a small, open area, where they’re tasked with shooting down a number of enemy aircraft with their airplane’s machine guns. All the while, Cortex’s minions are trying to shoot you down. Thankfully, these stages offer you a large enough health bar that they never get all that difficult.

The regular platforming has remained mostly untouched since CSB which means it’s still mostly solid. Out of all the level themes, the Egyptian stages are probably the most interesting, with lots of traps you have to carefully time your way through, such as dashing through pits of rising water before it goes over your head. It’s a somewhat slower paced theme that hearkens back to the careful platforming of the original game, without completely dominating the gameplay with it. The usual series tropes of animal riding and chase scenes show up, as well, represented here with Coco riding an adorable tiger cub and a angry triceratops, respectively. The cub, named Pura, might be one of the cutest darn things on the entire PS1 console, especially the way it nuzzles Coco and purrs at the end of one of his levels.

The graphics have only had a slight adjustment since Cortex Strikes Back, with the biggest new addition being some of the finest looking water the system can render appearing throughout a few stages. There’s an assortment of new death animations to ease the frustration of whatever mistakes you might make, as well. The soundtrack, however, has a little more variety to go with all the different level themes. In a nice touch, this game introduces the theme song used for the series proper, and this particular theme gets a different remix for each area’s bonus stage.

Overall, what you’ll think of Warped depends entirely on what you thought of the previous game. It still makes for a pretty solid platformer, even if the some of the new content tends to overstay its welcome. If it wasn’t for a few bits of particular annoyance, especially the motorcycle stages, it’d probably eclipse its predecessor as the pinnacle of the trilogy. Still, one can see why Naughty Dog would quickly move into other projects in an attempt to try something new, but not before one big final send off.

The Japanese version carries most of the visual and audio changes from previous releases, with a few exclusive features for this particular version. There’s even more goofy bonus FMVs to find, including one that switches between facts about the actual animals seen on display and the guy in the Crash suit goofing around. This version also supports the Japan-exclusive Pocketstation peripheral, allowing access to a few exclusive minigames.