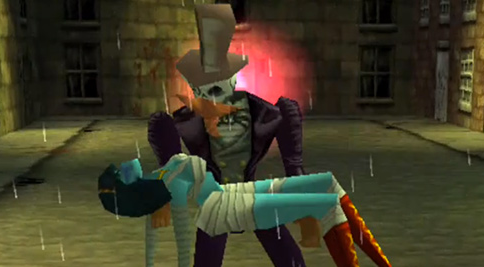 Sir Dan’s game was successful enough to warrant a sequel, which came out two years later. The plot is largely the same: the skeletal knight gets resurrected by mistake by the game’s bad guy and must fight against hordes of strange creatures. Only this time the setting is a take on Victorian England that features all the things commonly associated with it in popular culture: mad science, steampunk contraptions, circus freaks, vampires and Jack the Ripper (here envisioned as some kind of reptilian monster). There are also references to H.G. Wells’ novel “The Time Machine”, namely the titular machine and the underground-dwelling population of the Morlocks, here named “Mullocks”. For good measure Dan even has to fight parasitic octopus-like aliens. 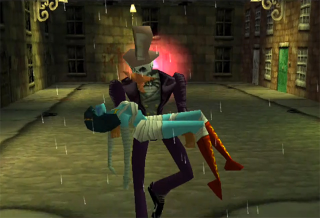 The villain, Lord Palethorn (who is actually just a commoner named Reggie Pallthrop), found pages of Zarok’s spellbook and the effects of the spells, besides reviving the dead and Sir Dan, turned himself into a demonic-looking being and his two henchmen into human-animal hybrids. (Think of TMNT’s Bebop and Rocksteady, only a little smarter.) Fortesque is not alone in his fight against the bad guys, though: new characters Professor Hamilton Kift, Winston the ghost and the Spiv take the place of the gargoyles and Hall of Heroes from the prequel, since canonically Dan was admitted among the heroes after defeating Zarok and so they no longer need to help him. 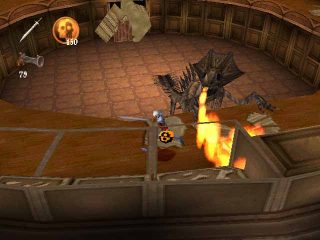 Prof. Kift, a rather ugly fellow with a bulbous head and metal prosthetic hands (probably named after Martin Hamilton Kift, one of the programmers), acts exactly like the heroes: you trade the chalices, which work just like in the first game, for new weapons he makes in his laboratory. Winston is the typical “cutesy” game helper who explains things and acts as a save point, and the Spiv is a shady gibberish-speaking merchant who sells Dan ammo for his weapons and offers to repair the broken shields. There’s also Kiya, an Egyptian mummy princess who becomes Dan’s love interest: however, her only role is to get killed by Jack the Ripper, prompting Dan to use the time machine, to force the player in a hard fight against the killer, and then unlock the game’s ultimate power-up. The romance aspect feels forced and she exists just to give Sir Dan something to do. 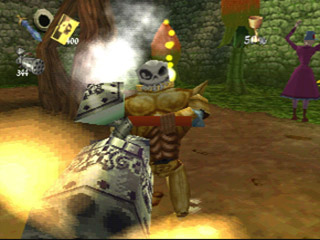 In general the game still does a nice job of balancing action, exploration and puzzles, which are a bit more involved than the many “pick up object to open lock” from the first game. It also takes advantage of an interesting feature: Sir Dan can detach his head and put it on the green skittering hands that can be found around the levels, and then control either the headless body or the Dan-hand. They liked the idea so much that most of the UK cover for the game is dedicated to Dan-hand! It should be noted however that, outside of some interesting uses, the Dan-hand is mostly used to get inside tiny passages where the switch to progress further in the levels is found. 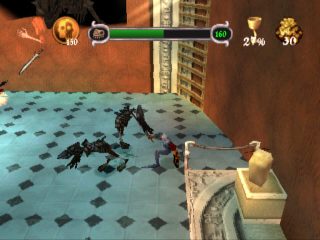 Some of the creative mentality from the original game was kept in the more outlandish missions, like the part where Dan has to defend people from pumpkin monsters that turn the poor fellows into more pumpkins (this series is kind of obsessed with these plants), or the 1-vs-1 boxing fight against Palethorn’s steampunk cyborg. The latter is preceded by what is probably the weirdest part in the game: prof. Kift asks Dan to bring body parts for his artificial human (butt included), which are retrieved in a timed mission where Dan has to hack said body parts off some bizarre Tim Burton-esque creatures. Then, when the mission is complete, Kift accidentally destroys the head of his creation and places Dan’s skull on top of the artificial body, thus bringing “Dan-kenstein” to the world. The mere fact that there are aliens in 1886 London also counts for wackiness. As one can see, the game is certainly sillier than the original: another example is how Dan is now able to speak short sentences, despite lacking everything from lungs to a lower jaw.

The game however was slightly less well received than the first one, for several reasons. One is the apparent attempt to artificially increase the difficulty: fall damage has been added, the life bottles can no longer be refilled indefinitely, and there are lots more invincible or plain annoying enemies to be found (constables, little vampire girls and aliens above all). Another factor is that the boss battles are for the most part repetitive, usually consisting in avoiding their attacks until their weak points become visible, over and over again. An interesting exception is the battle against the vampire count where Dan has to hit mirrors so that they reflect the boss’ projectiles, and eventually beams of light, in order to damage him. 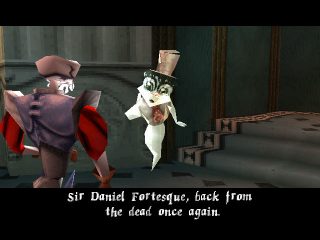 On top of that, the camera issues haven’t been resolved, and many lives can be lost because it’s hard to judge the distance of a jump, even more so with the addition of fall damage. The final levels full of platforming sections are especially infuriating in that regard. Also, there is no more level map, the order in which levels are found is fixed, but they can still be replayed from the hub, i.e. Kift’s lab. 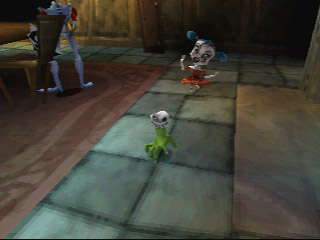 In the end, MediEvil 2 is an interesting if flawed sequel that left fans clamoring for more, but the upper management at Sony weren’t too keen in making Sir Dan’s adventures an ongoing franchise. But, just like in his own story, Dan managed to stay dormant for five years (instead of five hundred) and get resurrected on a new gaming platform.