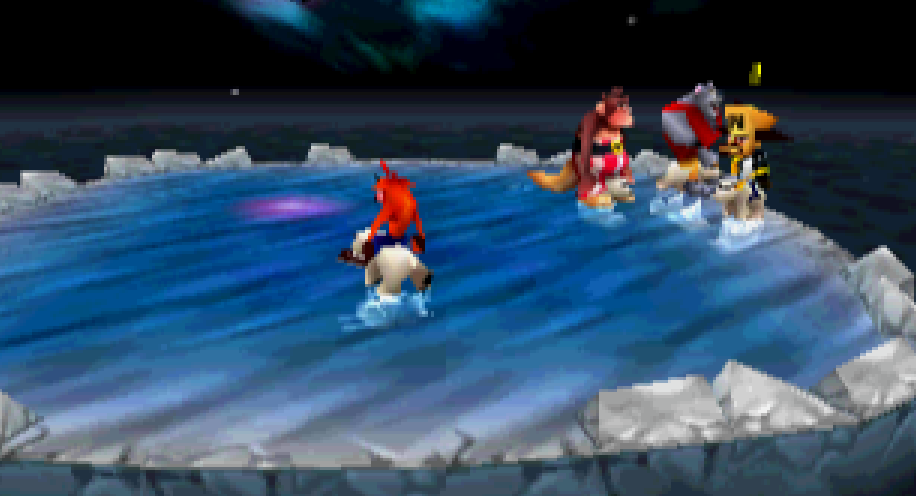 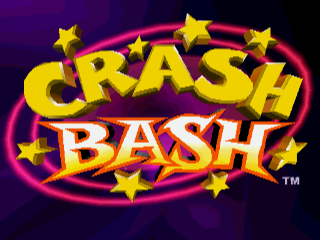 The only genre that could truly rival kart racers when it came to cash-ins of the late 90s to early 2000s would be party games. What Nintendo popularized with Mario Party, so many other developers would be soon follow along with. Few, if any of these attempts would ever come close to matching that game’s success, although Bash is probably the game that comes the closest. This is despite being the first Crash game to lack Naughty Dog’s involvement entirely, and in many ways, it tends to show. While it’s far from a terrible game, and would probably even work pretty well for its intended purpose, the lack of the polish seen in previous games still shows.

Somewhere in some sort of space temple, Aku Aku and his evil brother Uka Uka are having an argument about good & evil. This escalates into Uka intending to start a fight with Aku, before the latter quickly makes an excuse about the “ancients not allowing it”. The two masks bring in Crash, Coco, Cortex, and a few other characters to create teams of good and evil. The winning team will apparently decide once and for all if good or evil is superior, and thus, the fate of the universe. Well, at least it makes more sense than Sonic Shuffle. 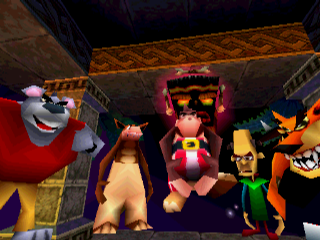 The roster here is a little thin, with only eight characters. Three of these slots are somewhat wasted by forgotten boss Koala Kong, along with Nitrus Brio, who made only brief cutscene appearances in Cortex Strikes Back before being replaced by the more interesting N. Gin, and new character Rilla Roo, who’s just generally boring all around. While the characters do vary a little in abilities, with some being better at certain minigames than others, the game won’t actually tell you these differences anywhere. To make matters worse, Rilla Roo & Dingodile have no real strengths, making them never worth using at all. 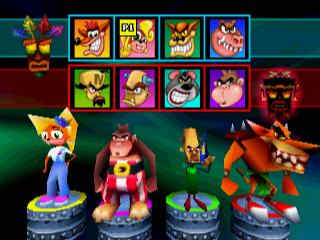 Bash eschews the board game portion that titles like this are known for, instead skipping right to the minigames. While there are only seven minigames to choose from, each of them is at least slightly deeper than your average Mario Party minigame. It’s not the worst of ideas, really, since it’s likely rare that you’ll find somebody that says that their favorite part of MP are the board game bits. There’s also not quite as much variety as you’d find in Nintendo’s series, as that game offered action games, puzzle games, rhythm games, and games of chance. All of the match types you’ll find in Bash, however, are action games all about direct competition with the other players. Still, they’re all at least decently fun, even if it’s a game that absolutely demands having other people nearby.

Ballistix is more or less four player Pong, in which the players bounce and reflect the metal spheres in an attempt to get them through their opponent’s goals. Polar Panic has the characters riding around on polar bear cubs, attempting to force each other off of the icy arena and into the waters below. In Pogo Pandemonium, the characters constantly hop around, trying to turn the squares on the board to their color and then working to cash in points, all the while moving quickly enough that their opponents don’t undo their coloring efforts. Crate Crush puts the characters in a small arena, where they need to use their attacks and the crates that constantly rain from the sky to empty their opponent’s health meters. 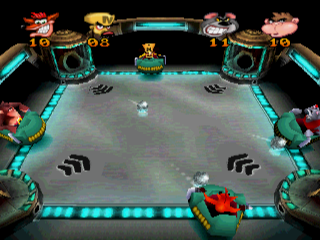 Each minigame also have four variations, which in turn add on new elements. One version of Crate Crush has a sleeping penguin that’ll go berserk if it’s attacked, spinning around and scattering crates all over the arena. One of the alternate takes on Polar Push will have Uka Uka using a beam to melt the platform you’re on, giving you less room to work with while the battle continues. Most minigames offer powerups, too, which helps keep matches unpredictable and keeps all the players on a mostly even plane. All the options are at least decent, although a couple of them can have the tendency to last just a little longer than they really should. 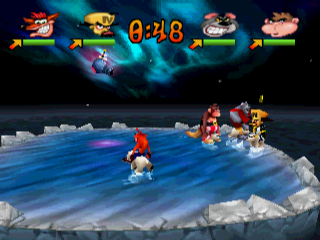 While there are more minigames to play than the ones listed above, unlocking these without cheating requires you to play through the Adventure mode, which means having to play against computer opponents. Just about anybody who’s played any party game will remind you of what a poor idea this is. At the very least, the game offers the option of going through this mode with a human teammate, and doing so will save you an unfathomable amount of frustration. Here, you’ll make your way through several warp rooms, in which you’ll have to beat four minigames before earning the right to challenge the boss, thereby progressing to the next area. In typical Crash fashion, you’ll need to replay each minigame several times to get all the unlockables, and this time, you’ll be forced to get enough of them to see an ending at all. 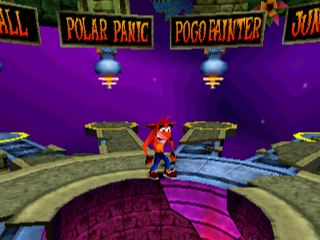 There are several reasons this mode is a slog to get through, the first being that to beat most minigames, you have to win three rounds. For the quicker minigames, this isn’t so bad, but when you’re dealing with some of the longer games, some of which can take a minute and a half to play out, it’s obvious padding that gets old pretty quickly. It’s also never fun when you’re building an early lead before one of the AI opponents starts to win a few rounds, meaning you’ll be stuck there even longer. At least the boss encounters, in which they wrap one of the minigames around a Crash-style boss fight, are pretty fun, mostly since you’re usually dealing with opponents who attack in clear, identifiable patterns. 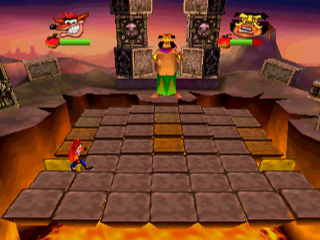 It isn’t so bad when you’re playing for trophies, where the AI sits at a reasonable level of challenge. To unlock boss stages, however, you’ll need to replay minigames to earn crystals, gems, and relics, each of which add certain handicaps. Gem challenges typically make you win one of the match types under a much stricter time limit, while crystal challenges add in some new element designed to foil you, the player, specifically. One of the Pogo Pandemonium types has poison mushrooms that sprout randomly across the board, which will instantly make you fail if you touch them. One Ballistix variant, on the other hand, randomly gives opponents an electric barrier that prevents you from scoring against them. Silver and gold relic challenges, in a move surely designed by a man who hated Crash fans with a flaming passion, requires you to win against incredibly tough AI opponents for three or five rounds, respectively. 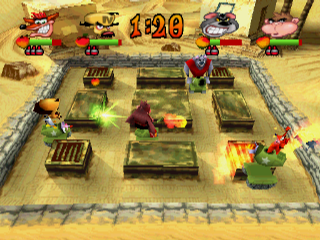 If it wasn’t for the way the game forces the player to go through all of this to actually see everything it had to offer, it might be forgivable. Since this is the only way to unlock all of the minigames, however, it makes using somebody’s save file a much more attractive option. Otherwise, you can expect to play through these challenges dozen of times, typically winning through sheer luck alone, punctuated by the game uttering the words “YOU FAIL” more times than a pack of internet-obsessed preteens. 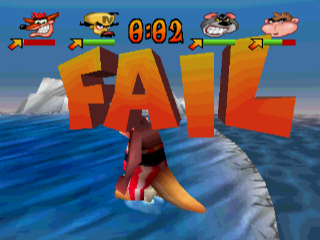 You’re gonna see this a lot.

For all this effort, you get one of two endings, depending on the character you beat the final boss with. One has Uka Uka apparently killing Cortex and Brio for their failure before being banished into space, and the other has Uka Uka becoming all powerful, forcing Aku Aku to tell Crash & Coco to save themselves. It’s more than a little tonally odd for this series and its usual slapstick nature.

The less you spend in the single player portion, the less urge you’ll have to snap the disc over your knee. Viewed from just its intended purpose as a party game, however, it works out a lot better. Some of the minigames are more enjoyable than others, with the nadir being a racing game where it’s particularly tough to keep your hovercart from floating right off the edge of the track. The lack of any framing for the minigames themselves is an interesting choice, although it’s going to be more of a matter of an opinion as to how well it works. As a party game, Bash does an admirable job, and considering the Playstation’s a little starved for choice in the genre, you could do far worse. 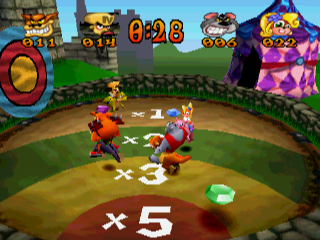 Graphically, the animation isn’t quite up to the standards set by previous games, as shown by the complete lack of expressiveness typically seen on the characters. It’s still pretty accurate to the usual art style, though, with plenty of bright and vibrant colors used throughout. The music’s also fairly decent, and although none of the tracks particularly stand out, there are a couple of remixes of tunes from previous games that sound rather nice. The game could have probably done without the booming-voiced announcer who sounds like he just left a recording session for a Mortal Kombat game, however. 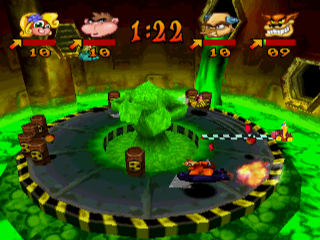 For an effort in the series completely divorced from its original creators, Bash could have ended up far worse. However, having a new team behind this particular entry does show, and it never does quite hit the lofty standards established by previous games in the franchise. Its value should be judged directly by how many friends you have around to play it, as this is the only way it’s enjoyable for any length of time. 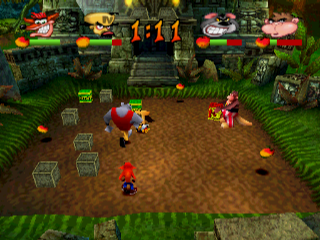 The Japanese version, while featuring the same audio and visual features seen throughout previous games, also features “Fake Crash” as a hidden playable character. A weird looking doppleganger of the bandicoot that’s made several previous cameos throughout the series, Fake Crash plays pretty much identically to plain old Crash.