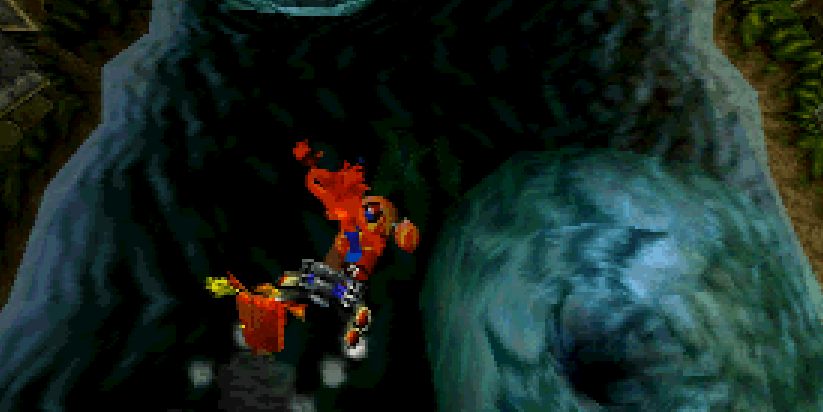 The original Crash Bandicoot was a solid start, but it had quite a few issues, not the least of which was its punishing difficulty. Despite this, the way it filled a whole in the PlayStation’s library that was opened with the arrival of games like Super Mario 64 made it a massive success. A sequel, of course, was inevitable, and thankfully, this sequel would fix just about every issue the original game had, leading to a game that’s far easier to recommend. Whether it’s the pinnacle of the series or if that honor goes to the game that follows depends on which fans you ask, but there’s no doubt that this game is a classic in the PS1’s platformer selection.

After defeating Cortex, Crash went on to lounge around on N. Sanity Island with his previously unmentioned younger sister Coco. (Apparently, Tawna dumped Crash for Pinstripe, the mobster potaroo from the previous game.) Meanwhile, however, Cortex has survived his confrontation with the bandicoot, stumbling upon a cave with a powerful crystal on it. While on an errand to pick up batteries for Coco’s laptop, Crash is recruited by Cortex to travel across the world and collect 25 more of these crystals for him. He claims that this is to invent a machine that will prevent a solar flux from destroying Earth. Given the game’s subtitle, he is obviously telling nothing less than the absolute truth. His ex-partner N. Brio would disagree, promising to send his minions after Crash unless he can collect the gems Brio needs to shut down Cortex’s space station. The end result is actually a little bit more plot than the original game had to offer, mostly conveyed through holograms of talking heads that appear every so often, but all this can be safely ignored, should you so choose.

While Crash 2 shares the same basic gameplay as the original game, there’ve been a lot of tweaks and additions as well, all of which make the game vastly more playable. Crash generally controls a lot more tightly, meaning you’ll have far less deaths from slipping off of platforms to worry about. Along with his usual spin attack, you can now slide, which works to kill enemies, break boxes, get under low spaces, and letting him get extra height if he jumps afterwards. Hitting the Circle button in mid-air makes Crash body slam into the ground in a somewhat painful looking fashion, defeating most enemies and letting him smash through the otherwise unbreakable steel-banded crates. Just don’t try that on the new Nitro crates, which will explode with the slightest touch, and can only be detonated safely with a crate found near the end of the stage.

The game’s structure has been vastly changed, as well. Instead of a world map, levels are now selected from a warp room, which allow access to five levels each. You’re free to enter these areas in any order you wish, but the boss guarding the next warp room will only be unlocked once all five stages are completed. This means that if you’re having difficulties on one level, you can leave, try the other stages, and come back whenever you want. Each warp room also has a spot where you can save and load your game as often as you want, which quickly fixes one of the very worst issues the original game had to offer. Partly because of this, the game is far easier on the whole, but it’s unlikely that many complaints will be had about that.

Your goal on each stage is to find the power crystal hidden inside it, and then make your way to the exit on the other end of the level. The power crystals are big, shiny, and purple, and they’re generally always located on the critical path through the level, so they’re hard to miss. (For a laugh, though, try exiting the very first level you enter right after you load in. Cortex has a few different, consecutively more annoyed speeches for missing them.) You’ll still earn clear gems for finding and smashing every crate in the level, with the much appreciated addition that you no longer have to clear a stage perfectly to earn one. You still won’t be able to tell how many crates you found until you approach the level’s exit, however, which still means you have to be somewhat paranoid over if you’ve found all the crates or not.

While the level design still follows after the linear design introduced by the first game, there are quite a few more secrets to find, almost all of which you’ll need to obtain in order to see everything the game has to offer. Some levels have hidden areas to encounter, which give you a much tougher platforming challenge, in exchange for giving up some extra lives or hidden crates as a reward. Colored gems are now also awarded separately from the clear ones, meaning you’ll have to search for them in the levels or complete certain conditions to get them. You can find a colored gem on the very first level, for example, but to earn it, you can’t break a single crate in the entire stage. Most of these conditions are pretty obscure, which means that you’ll either need a guide or be willing to try basically everything to earn all of them. Colored gems unlock new paths in certain stages, as well, which open up more hidden areas that hide more crates to smash.

The sidescrolling bonus stages also make a return appearance in most stages, but this time, they’re clearly marked on a giant question mark platform somewhere on the main path. Most of the bonus areas involve figuring out just how to break every crate without falling out of the stage and losing everything, and some of them actually get quite tricky. Should you screw up, however, you’re given unlimited attempts at getting it right, and you’ll most likely want to try to do that to grab all those valuable Wumpa Fruit, extra crates, and 1-Ups you can earn from them.

The entire game feels quite a bit faster in terms of pacing overall. Crash moves just a little bit more quickly, and the level design doesn’t typically make you sit and wait as much for the right moment to move. The easier level designs are made up for by the fact that they typically have more going on in them, like having points in the same level where the perspective goes from 3D to sidescrolling and back again, hazardous rivers that Crash navigates on a motorized surfboard, or parts where he has to climb across the ceiling. The hog riding and boulder chase levels are also revisited, this time with an adorable baby polar bear and a significantly larger, less cute version that has to be avoided along with collapsing bridges and electric barriers. The final stages introduce a jetpack that Crash has to use to navigate through obstacles like lasers and loose wires, and although it’s tricky to get a handle on at first, it definitely helps to break things up.

If there’s a complaint that could be said about the levels, it’s that they can start to feel somewhat similar, at times. Every stage generally has its own “theme”, like a snow level, a temple level, or a river level. Generally, every area of the same theme tends to look somewhat similar in their look, although their layouts vary significantly. The game at least does a pretty good job of introducing new level themes and adding surprises onto the old ones. It never gets too monotonous, since the non-linear level selection means you’re not usually looking at the same thing twice in a row. On the other hand, it also means you’re kind of missing out on a sense of progression, unlike the original game, where you’d start off on island, slowly closing your way towards Cortex’s castle at the very end. Later levels get more difficult, but the only real sign you’re reaching the climax is that some of the endgame areas are set in space.

Despite this, the platforming alone feels exponentially more solid than the original game. The game’s generous supply of lives still shouldn’t be taken for granted, but it never feels like it asks too much of you, nor do many of the deaths ever really feel like they weren’t your fault. About the only time the game feels somewhat unfair is when certain enemies tend to blend in with the background, which can make it hard to tell exactly where they are. There are also points where the collision detection feels somewhat spotty, although it’s a rare enough occurrence to be a minor issue. At the very least, it’s a far easier game than its predecessor, with the biggest spikes in difficulty coming from the hidden areas you’ll need to explore for full completion.

The graphics somehow manage to outshine the original game, which was already a pretty high milestone for the system’s capabilities. Everything generally looks far smoother and even more vibrant than its predecessor, and Crash himself has a lot more animations, which let his character show through even more. There are also a lot more fancy graphical effects used, too, from lighting effects on dark levels, to something as subtle as Crash’s breath on the ice levels. It’s a true testament to what the PS1 could do, if properly pushed, and it easily manages to outshine a large majority of 3D titles that would come afterwards.

If there’s one particular touch that adds a lot to the game, it’s just how many more animations Crash has, this time around. The highlight would have to be when you exit a level with a gem in tow, which makes Crash bust out into a ridiculous dance routine, imported straight from the original game’s Japanese commercials for your enjoyment. There are also about two dozen unique ways Crash can get killed, each of them with their own unique animation. They’re all played for slapstick, from having Crash exploding into tiny bits, to getting eaten by giant plants, to swelling up from being stung by bees. It’s likely you might actually see these a lot, so they definitely help soften the frustration caused by a particularly tough level.

The sound’s also had a major improvement, the most notable aspect of which would be the voice acting. While Crash himself still remains mostly silent, there’s actually a fair amount of dialogue. Cortex is voiced by Clancy Brown this time around, who’s served as the actor behind The Kurgan from Highland and the DCAU’s Lex Luthor. Here, he actually manages to put together a surprisingly menacing performance for such a goofy looking villain. The soundtrack is generally a little more energetic, as well, compared to the more ambient tones of the original game, so the music definitely stands out a lot more.

There are so many reasons to recommend Cortex Strikes Back that it more or less obsoletes the original, entirely. Pretty much every flaw the original game had has been refined into a much smoother, much more polished product, and it leads to what may well be the best game of the series. This feat is all the more impressive considering the great wealth of platformers on the system. For those new to the Crash series, it makes a great place to start, and it’s easy to see why so many games afterwards would follow the template this one set.

The Japanese version includes most of the aesthetic changes that the first game’s Japanese release made, including a new track for the title screen. This time around, however, there’s a hidden FMV you can access, involving in a guy in a Crash suit goofing around and dancing with various women. It’s pretty special.