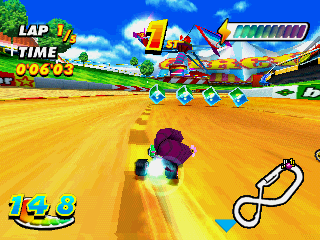 In 1994, Norwegian developer Funcom founded an office in Dublin, Ireland to create console games while they focused on developing for computers. For the next few years, Funcom Dublin developed racing games such as Impact Racing and Championship Motocross Featuring Ricky Carmichael, but their most well-known game is Speed Punks, a solid kart racer that offers an enjoyable challenge for those who prefer a little more focus on skill than luck.

There isn’t a plot beyond six friends racing to their heart’s content. Racing fanatic “Monty” Carlo and the cool, collected Monica serve as the all-rounders in terms of stats, the overexcitable Tempest and local school bullies Buster & Wedgie are heavyweights with high top speeds, while bratty Tabitha and brainy, uh… Brains are lightweights who excel at acceleration. 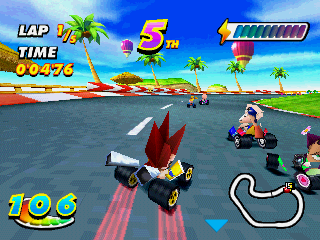 As a kart racer, Speed Punks is pretty standard in its set-up: you race around a track a few times and try to get into first place, avoiding items thrown at you by rival racers and picking up items to use on them. The items are quite traditional as well, including missiles that shoot straight ahead, mines and slime trails that spin racers out, and even a rainbow shockwave that takes out all racers caught in its path.

However, a key change to the formula is how boosting works. Instead of earning it from powersliding (which is now mainly used to make quick turns without losing speed), you fill up a boost meter by collecting lighting icons and can activate it whenever you like to give you some extra speed. But you can also conserve it until your meter is filled, where you will be able to boost for a little longer before your meter starts to deplete. You also can’t boost and use items at the same time, making it even more crucial that you time your moves right. 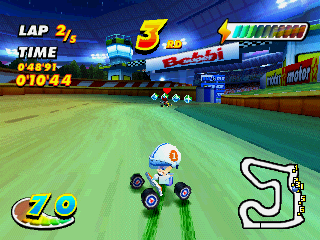 The use of boosting belies the lightning fast pace that Speed Punks generally runs at, with laps lasting just under a minute on even the lengthier tracks. In order to give players time to catch up, races run at five laps instead of three, and you will need that time because the game demands a good understanding of its mechanics to make it out on top. More than your average kart racer, you’ll need to be skilled in controlling your vehicle, finding and taking hidden shortcuts successfully, understanding the differences between how every racer handles, and dealing with your opponents.

Even on the easier tracks and difficulties, it can be quite challenging to get into first place, which can be particularly tough when taking on the tournaments. You have to come in the top three in order to move on to the next race, and you have three attempts to retry any track before you’re disqualified and have to start all over again. You’ll earn rewards for getting in the top three at the end of each tournament such as bonus versus modes and multiplayer race tracks, but the best bonuses such as extra playable characters will only be given if you come first in every race. Even then, you’ll only unlock characters such as Cosworth the dog, exchange student Tetsuo and BEEMER the robot by beating them in challenges where you have to win through boosting and effective use of shortcuts alone. 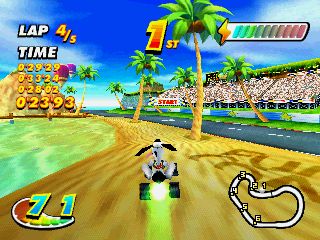 The emphasis on skill creates for a very compelling kart racer, but it’s sometimes undercut by the random elements inherent to the genre. No matter how well you do in a race, you can suddenly find yourself getting hit with an item at the worst possible time, and maybe even two or three in quick succession if you’re really unlucky. What’s frustrating is that opponents seem to recover more quickly, so even if multiple racers get hit at once, you could still be left in the dust. Kart racers always have to struggle in their balancing of skill and luck in how those elements decide the race, but the demand for skill mastery in Speed Punks causes the luck to clash moreso than with its contemporaries.

But if you can get over that hump, there’s plenty to enjoy. Controls are consistently responsive, and the bounciness of the kart handling combined with the fast pace creates for a likeably manic energy in just moving around. Weapons offer plenty of offensive and defensive options, allowing you to take out opponents or fend off incoming attacks. Though the racer types are limited, they’re varied enough in stats to let you find one you’re most comfortable with.

When it comes to multiplayer, there’s a good deal to play around with. As well as being able to race against another player in the game’s 12 tracks, you can have four-player races in 12 bonus tracks if you have the PlayStation Multitap (which even came with a special edition of the game). You can only have four-player races in these tracks, as they’re much less complex and detailed than the default tracks, but it’s still a very nice bonus.

In terms of presentation, what stands out immediately are the graphics. Inspired by the Dr Quirkey’s Good Time Emporium arcade in Dublin, Speed Punks uses gouraud-shaded, textured polygons to create bright, colorful visuals (one of at least two racing games to use the technique for the system, the other being Namco’s Ridge Racer Type 4). The environments are big and detailed, the characters are distinctly rendered and adorable, and the whole game moves at a consistent framerate of 30FPS, making for one of the PlayStation’s most attractive racers. 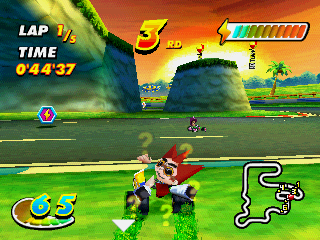 The soundtrack by Funcom composer Martin Schjøler goes for high tempo electronic rave music that suits the high octane races very well, though the low number of pieces means they somewhat lose their effect as they get repeated over time. The sound effects do a great job at giving each skid, boost and attack the impact they need, while the character exclaim goofy little noises whenever they hit an opponent or get hit themselves.

Speed Punks was released in Europe in September 1999, but had its American release delayed to April 2000 to avoid competing with Crash Team Racing (also published by Sony). The time was spent making numerous changes to the US version, such as being able to see your racer’s stats, an improved framerate on certain tracks, and notably much more difficult A.I. opponents. They were smarter, more aggressive and faster in catching you up, resulting in a considerably more challenging time.

Speed Punks reviewed very well in its day and sold around 200,000 copies (which is nothing to sneeze at for an Irish-made game given the country’s lack of industry presence at the time), and Funcom Dublin even briefly worked on developing a sequel. According to the game’s lead artist Phil Plunkett:

‘After finishing Speed Freaks, we had a lot of ideas for Speed Freaks 2 so we worked on that and some levels for it. We had some nice snowy levels and some pretty cool theme park levels that really pushed the PlayStation. [It] was looking pretty cool, [but] unfortunately it was at a time when Sony were transitioning to PS2 and Funcom was focusing more on online multiplayer PC so it never happened. I think I still have a VHS somewhere of the game, but that’s all really.’ 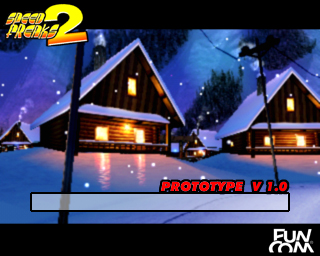 They also attempted work on a racing game for the original Xbox called JMX Racing, but that was also cancelled and the studio closed in August 2001. Since then, Speed Punks has largely fallen into obscurity, but it’s certainly worth your time if you want a kart racer with a good deal more speed, skill and challenge in order to win.

An article on the history of Funcom Dublin, along with a very brief interview with Matthew Lloyd – https://gamedevelopers.ie/fun-anyone-2/

A page on lead artist Phil Plunkett’s portfolio showing off his work on Speed Punks, along with a loading screen for the cancelled sequel – https://philplunkett.com/funcom-dublin/speed-freaks/

The Speed Freaks fan wiki, who provided extra information and details such as the differences in the American version and the existence of Speed Freaks 2 – https://speed-freaks.fandom.com/wiki/Speed_Freaks_Wikia