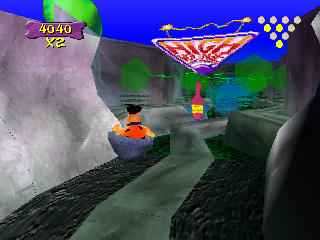 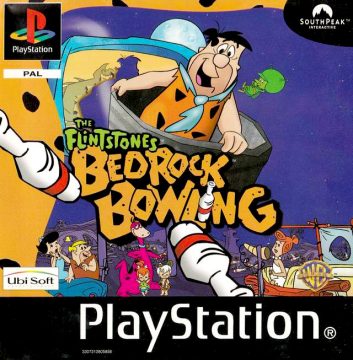 The original PlayStation was aging fast as the new millennium passed. The system was slowly doomed to become a dumping ground for licensed titles made to sell to budget-conscious parents and grandparents looking to buy a game for their child’s discounted/hand-me-down console going by brand recognition alone. If there was a cartoon with a figment of name value at the time, it got a cheap cash-in, and The Flintstones was a brand that cashed in indeed. The modern stone age family and co. had starred over a handful of video games before, and a bowling game, pardon the pun, would be up their alley. After all, Fred and Barney played the sport many times on the show. Having a licensed spinoff with ol’ “Twinkletoes” and the gang akin to Animaniacs Ten Pin Alley would be a decent-if-predictable product, but Adrenalin Interactive did like Fred often did and went for a crazy b-b-b-b-bet. 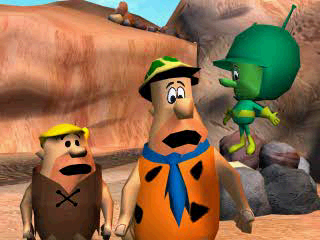 The lengthy CG intro tells the setup of Fred working in the quarry. As usual, his job was on the line as his boss Mr. Slate will fire him if his trench isn’t completed before tomorrow. But as Barney reminds him, they both needed to practice for the big bowling tournament. What are two blue-collar cavemen to do? Why, have The Great Gazoo merge both, dum-dum! With a snap of his green fingers, the floating alien carves the massive trench to create downhill/bobsled obstacle courses for them all to ride down in hollow bowling shells. In his words, it makes it less boring, but had he participated he’d say otherwise.

The game consists of 11 lanes total, running from such backdrops as the quarry, jungles, crystal mines, drive-in theater (complete with a stomping Godzilla), volcano, and even The Great Gazoo’s home planet of Zetox. Fred, Barney, Dino, Pebbles, and Bamm-Bamm are selectable, but have zero differences among one another other than to differentiate the players as you pass the controller with each turn in multiplayer. Each lane has gems to collect and 3 birds to ram into as you slide down towards the finish line. The bowling aspect comes in with the 10 pins littered along the way as you try to knock them down; like bowling, fall in the gutter twice and the lane’s over. Honestly, that’s about it on the whole “bowling” part. Your character rides inside the rocky giant bowl and tries to hit the big pins one at a time, all while dodging marching dinosaurs, scurrying bugs, misplaced explosive powder kegs– basically anything not a pin, gem, or bird. The only goal is a high score. Every strike shows the same low-grade FMV of Gazoo underhandedly congratulating your efforts. Hitting enough birds sends you to a bonus game where the player rides in an empty swimming pool for more gems and pins to hit, and a sunbathing Wilma Flinstone. And that’s it. The game ends once you finish all the lanes with a cutscene of Fred & co, driving off and leaving The Great Gazoo by the end of the trench. You don’t even have to knock a single pin down.

For such a late release on the PlayStation, the developers showed little effort making it look anywhere near late-gen. The amount of slowdown, short-distance pop-in, and polygon tearing & shaking will make you believe a prehistoric bird is powering your console. The game supports the Dual-Shock, but the analog controls about as well as the D-pad in terms of manuvering a chiselled massive rock bowl: that is, not very. Fred might quip “I’m going too fast” as his stone shell lumbers off a ramp as floaty as a feather, bouncing off walls and explosions with little more than a “whoops” and another slow aerial descent. In fact, 90% of the lanes act as if the gutter guards are down, invisible walls keeping you from falling into a river or lava or any bottomless pit that might make the game a challenge. Actually setting the controller down and waiting for the stage to end does about as well as playing for real a lot of the time. That is, until the Zetox lane, where the difficulty skyrockets. The music is almost as bored, seemingly cutting out in intervals in the middle of a lane. Sound effects are sporadic yet are loud, almost startling as the disc decides to play a stock cartoon noise at random parts to make sure the player’s still awake.

The only saving grace is the voice work. Cartoon Network and Warner Bros. spared no expense bringing in the official cartoon voice actors to fill their roles. In-game there’s only around 5-6 lines of dialogue the character will say, but they are performed perfectly. The highlight is having Harvey Korman reprise as The Great Gazoo as he narrates his distaste for each upcoming lane (and who can blame him?). This game is actually Henry Corden’s final portrayal as Fred Flintstone before he retired, leaving it a low note to end on. At the very least, the acting for the FMVs are authentic as can be. If only the gameplay tried as hard.

As it stands, Bedrock Bowling is the most un-bowling centric game possible. It’s such a mismash of ideas that it’s a bizarre spectacle of a sporting concept, like a Double Dare physical challenge without the sloppy mess. Used copies sell now for much fewer clams than a round of real bowling, but Yabba-dabba-don’t bother unless you see yourself as the hardest of hardcore Flintstones fan.