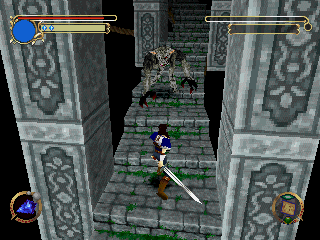 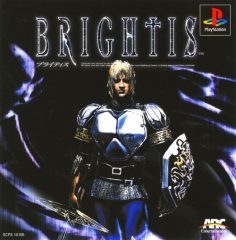 Quintet was in a weird place from the mid-90s onward. Following their well-regarded trilogy of action-RPGs (Soul Blazer, Illusion of Gaia, Terranigma) and the establishment of Shade Inc. by former Quintet members, the studio’s efforts fell into obscurity. One game that got particularly overlooked was Brightis, a Japan-only collaboration between Quintet and Shade that arrived with little fanfare and vanished with even less.

Despite its heritage, very little information on it exists in the wider web: the only walkthrough that exists is a series of YouTube videos, no fan translation has been attempted, and it didn’t even have a MobyGames page until this reviewer put one together. Perhaps that’s understandable to some extent, as it’s mechanically clumsy enough to be dismissed for other action-RPGs of the day. However, it’s nevertheless an enjoyable game that partially carries the Soul Blazer games’ spirit of providing a straightforward action-RPG with some unique gameplay ideas. 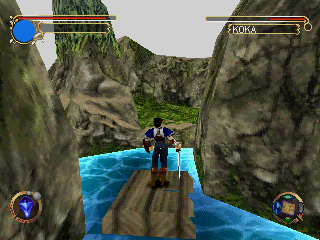 You play as Al Ted, an adventurer mercenary working for the ever-expanding Barge Empire, who have found an abundance of powerful energy resources known as “elements” in the continent of Ur Nord. However, in digging up sacred archaeological sites, the Empire accidentally released a race of demons intent on reclaiming the elements and conquering the world. The only way to seal the demons back is to find the four magical “global elements”, hidden deep within temples across the land. As one of the few survivors of the Empire’s army, it’s up to you to collect those elements and save the people of Ur Nord.

Brightis is a fairly standard action-RPG, as you run around fighting enemies, exploring dungeons hidden in the overworld, and avoiding dangerous traps. While you can jump around and learn to cast spells with the acquired global elements, it’s a simple enough game to get into. But it keeps things interesting with a handful of unique mechanics, particularly its light system.

When you enter a dungeon, you can’t see very far into the darkness. You can cast a ray of light to find your way, but you’re best finding bright blue gems called “light elements”, which summon an aura of light around you. It depletes over time, and can only be replenished by standing near light sources or attacking enemies, encouraging you to keep moving and keep fighting.

Light elements also play a part in puzzle solving, as they are used to open doors and activate switches. Most of them can be picked up again afterwards, but you’ll sometimes be required to sacrifice your light source or explore the dungeon for more elements in order to progress. It’s a clever way of making the player consider their choices, and holding onto light elements is rewarded with the ability to open special chests once the dungeon is cleared. 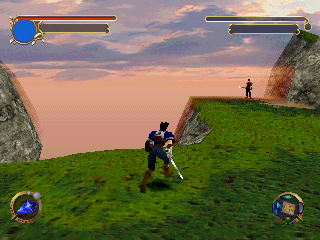 The combat system also gets a surprising amount of depth. Killing enemies nets you the usual gold for buying items/equipment and experience for levelling up, but you also get SKILL points. In the game’s hub village of Elsard, you’ll find a trio of warriors who teach different types of attacks. You have a light and heavy attack, a dash attack while running, a jump attack and an attack while blocking, and you can purchase a variety of different attacks for each. Not only that, but you can learn basic attack combos and even a series of Secret of Mana-style charged heavy attacks, where holding the heavy attack button for different amounts of time lets you pull off various attacks.

It’s crazy how much customization you’re given, but it’s let down somewhat by how expensive attacks are in relation to how few SKILL points you get. Even by the end, there’s simply too many expensive moves that you’ll have to settle for a few reliable attacks. However, combat never requires intimate knowledge of your moveset, and you can get away with the most basic attacks. While this leaves the extensive list of options feeling rather wasted, it also means that you don’t have to overwhelm yourself and can work through the game based on what’s comfortable for you.

In that sense, Brightis is quite good at giving you plenty of wiggle room. You can freely customize the button inputs in the menu, with camera control options available for both the DualShock and digital controllers. There are runes near dungeons that teleport you back to Elsard if you want to recuperate. The in-game map allows you to see what path you’ve taken if you’re lost, while a hunter in Elsard points out where you need to go next on the world map. It’s a surprisingly welcoming game, and one you can easily experience without knowing a word of Japanese. 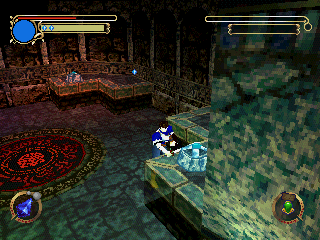 Where Brightis stumbles in part is in the execution of those mechanics. Considering how heavily combat is utilized, fighting enemies can oftentimes be quite clumsy due to a lack of a manual lock-on and the stilted nature of attacks stopping your movement. It’s something that can be gotten used to if you play carefully, but it can still trip you up when you’re surrounded by multiple enemies or trying to move about quickly. The light and darkness system also has its problems, with some sections of the game being quite stingy in providing light sources or enemies to attack. This makes navigating dungeons more tedious than it should be, and it especially drags down the final dungeon when areas become impossible to parse with nothing to replenish your light source.

Another issue with the game is in how repetitive its structure is. The game sticks pretty rigidly to its formula of “find dungeon in overworld, beat dungeon, repeat”, which is further exacerbated by the dungeons’ heavy focus on combat. Apart from the odd puzzle or bit of open exploration, the dungeons are often linear gauntlets, made worse by how the initially varied enemy selection soon dwindles to the same hordes of soldiers, skeletons and pig men. There’s nothing wrong with having a formula, but when it lessens the spontaneity of the adventure, it does hamper the experience.

It’s also quite linear, with only one new dungeon available at any time. You don’t acquire new powers or items that affect how you’d navigate dungeons, so what dictates the progression is the narrative – for example, a character comes in and steals one of the global elements, so you have to find their base and take it back. The way events and characters change is well thought out, meaning that it doesn’t feel totally arbitrary in restricting the player’s progression, even if it does limit your agency.

There are optional challenges to tackle, thankfully. Hidden throughout the map in comically tiny bags are skill coins, which only seem to affect your endgame rank. More notably are two optional dungeons – one hidden behind a waterfall in Elsard and the other in a cave at the southwestern cliffs – that offer randomly generated floors to fight enemies or solve puzzles. They mainly help in grinding for gold and SKILL points, but are an enjoyable way of engaging with the game’s mechanics without being too overpowered. 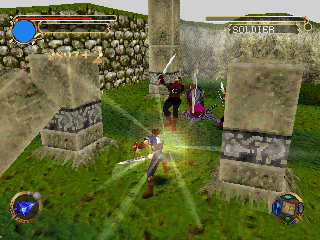 There’s a good deal of text for its cutscenes, but what can be interpreted from the visuals and actions of the characters is that there are various parties who attempt to betray you or each other for their own selfish ends – and they all end up paying for it. Only you and your rival Caplas, who stay true to themselves and others, consistently make it out all right. It’s a trite reading, perhaps, but the vibe provided from the narrative is fairly compelling.

Graphically, Brightis can seem quite lacking in regards to its peers. The sparsely detailed characters and blandly textured areas don’t look great, but it’s clear that the emphasis was placed upon the lighting engine. The interaction between light and darkness is impressively done, and it must be said that the ambiguously detailed enemies and locales can result in some powerfully unnerving moments when shrouded in darkness. In the overworld, there’s some cool weather effects depending on where you are, but it’s hampered by a pitifully small draw distance and a framerate that can chug pretty badly if there’s too much happening.

The best part of the presentation is undoubtedly its soundtrack by Quintet regular Masanori Hikichi and Falcom composer Naoki Kaneda. While by no means outstanding, the music is very pleasant in both its composition and arrangement, creating for a variety of tonally appropriate tunes that never grate even when spending upwards of half an hour in a dungeon. Each dungeon even gets its own unique track, which is a very nice touch.

As a late-90s Japanese PS1 exclusive, it might not be surprising to learn that Brightis was compatible with the PocketStation peripheral. When connected to the memory card, you could use the PocketStation to play card games and fighting games in order to raise your armor and defense.

Perhaps Brightis came out a bit too late in the PS1’s life to make much impact. It’s simple enough in most of its mechanics that it’s not as interesting as its contemporaries, and clunky enough in its execution of those ideas that it’s not as appealing as its predecessors. Still, there’s plenty of things done well enough that it’s worth checking out for fans of vintage action-RPGs.

A complete YouTube playthrough of the game by Latria Minamoto – https://www.youtube.com/playlist?list=PLjotvIcBrLDl-5ngyyPVaQonIhM7qEJt0

A list of the game’s credits, collected and posted by J. Raido (also known as djsw) – http://raido.moe/staff/ps1/ps1_brightis.html