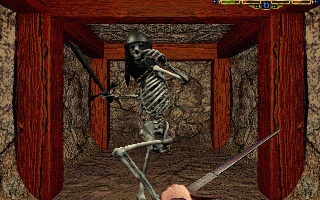 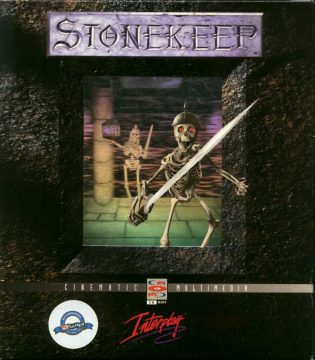 Stonekeep is in many ways a perfect encapsulation of the PC gaming scene of the mid-90s. It was a time of remarkable ambition matched by the breakneck speed of technological developments. The pace at which hardware was iterating and improving meant that it was often a struggle for developers to keep, a pitfall that Stonekeep was hamstrung by, stretching an initial development timeline of nine months to over five years. 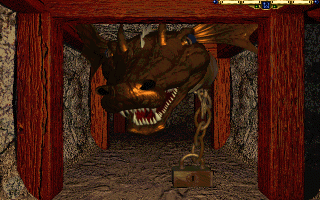 The game itself reflects the spirit of that time as well, when many of the systems and mechanics we take for granted in games today were first being introduced and refined. It takes risks in ways games today rarely do, spending tremendous amounts of money to create lavish motion captured graphics and FMV only to completely scrap huge portions of them for something new (and also untested). At this time, the Wizardy and Might and Magic series were falling out of favor with all but the most devoted gamers, and Stonekeep tries to distill the classic elements into a package that would take advantage of the CD-ROM and wow them visually, without becoming too complicated. It is a little simplistic in that regard – there’s no character customization in the beginning, and technically only one playable character, though NPC companions do join from time to time.

But its ambition isn’t limited to graphics, its entire design stretched the confines of standard RPGs of that era in some very novel ways. It uses games like Eye of the Beholder as a template, being utilizing real-time combat, though with full screen visuals and (relatively) smooth scrolling movement animations. While at its core it’s a fairly traditional first-person dungeon crawler, it does feel more modernized, and introduces elements like a magic system that requires you to collect runes and engrave them onto wands to cast spells.

The ability to customize spells and alter their properties according to the player’s whims or needs is an evolutionary step beyond the standard magic systems in other RPGs of that era, which largely leaned into the Dungeons and Dragons template of pre-defined spells with very specific, limited effects. The spells in Stonekeep are much more modular and dynamic, meaning players could tailor them to specific battles or situations, and they also represented a hard won reward for exploration and discovery. Ever spell represents a level of personal investment on the player’s part. 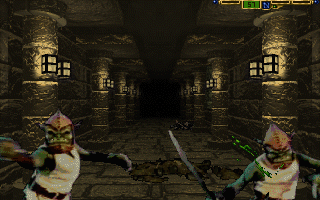 The combat is fairly rote for first person dungeon crawlers (just attack, attack, attack), but the motion captured animations give the enemies a unique sense of momentum and threat. When a trio of goblins are rushing at you with swords drawn, you get a real sense of impending danger that most RPGs can’t convey. Unfortunately the attractive (and spendidly animated) enemies aren’t matched by the environments, which are almost universally bland and repetitive. Not only does a constant stream of grey and brown backdrops dull any sense of epic adventure, it makes finding your way around much more difficult, with very few actual landmarks to navigate by.

That’s one of Stonekeep’s key failings, actually. It’s incredibly easy to get lost in the game’s many, layered labyrinths, so unless you’re taking copious and detailed notes (something, to its credit, the game’s journal and map facilitates) you’re going to spend a huge amount of your play time backtracking or trying to find the next section of dungeon to explore.

There’s not a lot of story to keep driving you forward, either, though Stonekeep does present an interesting mythology constructed around a pantheon of gods that each represent one of the worlds in our solar system. A dark force has imprisoned these nine gods and trapped them in the titular keep, and it’s up to the young hero, Drake to save the day. Drake was also terrorized by the same dark god as a child, in a cringey but very memorable FMV sequence at the beginning of the game, which reportedly cost somewhere in the ballpark of half a million dollars, or ten times the game’s original budget. It’s as poorly staged and acted as you’d expect from a mid-90s FMV sequence, and one can’t help but wonder while enduring it how that $500,000 could’ve been repurposed. 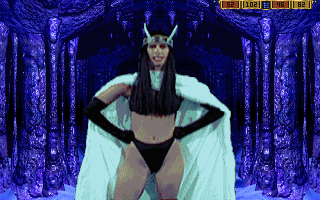 The story starts strong (despite the very rough quality of the video intro) but quickly fades into the background, and the game becomes much more focused on gameplay than narrative. This isn’t a bad thing, though, because constant FMV sequences would likely do more to pull players out of the setting and any sense of immersion than enhance it. And much of the later story elements are delivered diegetically, through scrolls you uncover in chests or NPC characters you encounter as you explore, so they’re not jarring and do just enough to remember why you’re plumbing these depths in the first place.

Puzzle elements are fairly spartan, but they do exist, and largely rely on the adventure-game-like dynamic cursor to solve. Mostly the cursor serves as a targeting icon for attacks, but move it over interactive objects or other characters and it will change accordingly to reflect the action Drake will take when you click. For puzzle solving this generally means pulling levers or pushing secret bricks and the like, and there’s a great deal of satisfaction attached to uncovering some of the game’s esoteric secrets. The problem is that during a normal playthrough you’re extremely unlikely to find those secrets unaided, because most of them involve a lengthy ritual that isn’t suggested in game in any way. 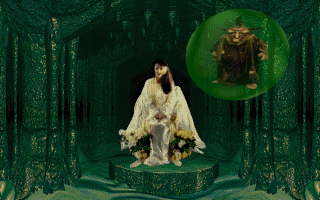 Take for instance the case of the very sharp dagger. At the beginning of the game it’s possible to attain a powerful weapon that will be immensely helpful in the early stages of your journey, especially when you’re a novice and need to level up your abilities (Stonekeep employs an Elder Scrolls-esque skill system, where you improve your skills by using them). It’s a huge boon but, without a strategy guide, it’s incredibly unlikely that you’d pull the first lever three times, push a secret block to reveal another hidden lever, walk through an invisible wall, and push yet another secret block to reveal the dagger itself. And nothing in the game so much as suggests it’s hidden there, much less how you would go about attaining it.

It’s a strange design decision, hiding some of the best content behind indecipherable secrets, and other than as a ploy to sell strategy guides, who knows what the rationale was for deploying it so frequently here. It’s one of several reasons why Stonekeep is actually better played today, with the wealth of FAQs and maps available, than it was at release. With those modern resources at your fingertips, it actually holds up really well, and if you can put aside the dated graphics and production values, it’s a fascinating look back at a very interesting period in game design.

Stonekeep: Bones of the Ancestors