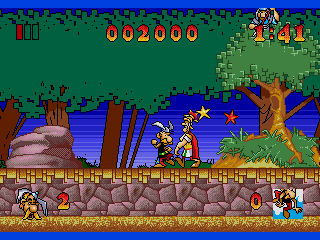 Following excellent reviews and success with Astérix one year earlier, Sega decided to make a sequel. Panoramix is again been kidnapped by César and the Romans, but this time they also took Idéfix with them! Naturally this means war, so Astérix and Obélix once again brings along some potions and wild boar as they search for the druid and their beloved dog. While Astérix on Master System was developed internally at Sega of Japan, this game was handled by British studio Core, who would later help soil many pants with the release of Tomb Raider.

Sadly at this point in time, the only thing Core could soil was the Astérix name. Like the prior title, this game takes you on a journey through Gaul and Europe in the fight against Romans and rabbies infested animals of all kinds in order to save Panoramix and Idêfix who are held captive in Rome. Three versions were made and the game was released on all available Sega consoles at the time. Though it is stated across various sources on the internet that the Genesis/Mega Drive was released first, this is in fact wrong. The Master System version was released near one year prior to its 16-bit brother in late 1992, though this was only true for certain parts of Europe. Between the Master System and Genesis, the games have a great number of differences.

The Master System version plays somewhat similar to its predecessor – a straight forward platformer with Astérix avoiding all kinds of dangers from the animal kingdom to Mother Nature herself trying to throw hazards at the size handicapped Gaul. There are five zones which are divided into separate small levels, with each having a specific theme to it, like Gaul, Forest or Rome. By default you start as Astérix but by pressing up and 1 you change into Obélix, which makes it stand out a bit from other platform games. There’s very little reason for changing into Obélix, however, as he is big, burly and has little reach with his attacks, while Astérix can crawl, jump higher and his punch has a longer reach. The attacks are a major problem because both characters have only one punch, which enemies have to be right next to you in order to connect. You can hold down the button to do a charge attack, but it does little good as you are most likely going to take damage before it will connect. There is also no attack while jumping or ducking, another big problem as many times enemies are above or below, you which forces you to take damage before being able to take them out. All the graphics are alright, but they lack color and vibrancy, making it into a real bummer of a look. The levels also feels incredibly unoriginal and could have been put into any game without it making any difference. In the end, it feels nothing like Astérix and looks more like McKids than the French comic. A Game Gear version saw release some time later, which is a direct port of this version with no changes except a smaller screen. 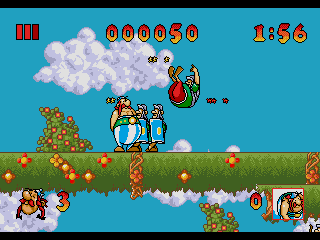 The Genesis version is another beast in itself – an ugly and grotesque beast at that. While retaining the story line and most of the level designs, this version works quite differently. The biggest change is the fact that you now control either Astérix or Obélix depending on your choice before the stage. The same rules apply to their abilities, however, and there is little to no point in picking Obélix, even more so in this version. The attack range is as horrible as ever, and enemies will walk into you constantly while you try to attack, usually without much luck. You can find items to help you, like bombs and cloud platform bottles, but they come in a limited supply of three at a time, and won’t be of much help. The game is excruciatingly difficult as well, and everything is out to get you. Roman guards march onto you from every angle, birds go flying at 200mph, snowmen slide over your feet, crabs pinch you, it is clear Astérix pissed off the Gods, because all of his creatures are out to get him. You still can’t jump and attack leading to you taking so much damage that you’re not likely to see the end of the stage before throwing the controller like Zeus throws lightning. The stage layout has been drastically changed to make it accessible for both characters, but they still look awfully bland and looks like something out of any generic platform game. The graphics do have a more colorful look in general, with a similar look to Dragon’s Lair on SNES. One level of particular interest is the snow level, where snow flakes that covers half the screen fall constantly, blocking your field of view.

The music is, however, a different story. Composed by Tomb Raider‘s Nathan McCree, most the tracks are top notch. Getting more than he should out of the YM2612 FM chip and delivers some solid tunes, with the title screen standing out among them. The music doesn’t really fit well with the stages nor the overall style of Astérix, but like everything else here, it’s all just a mix of things thrown together which doesn’t fit, so the music is at least a highlight. In a way, the music has that distinct European demoscene feel to it, which you would find in Chris Hülsbeck and Bjørn Lynne, though the compositions are not as strong as what they would have offered. The Master System soundtrack is overall good too, though more low key and the melodies are less bold. 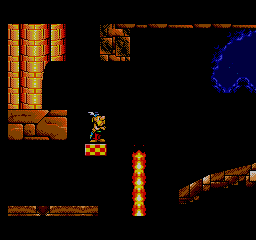 Sadly, this title was the first Astérix game to get a solid worldwide market release with the exception of Japan. It seemed as if everything was there to make this into a great introduction for new fans and a title for old hungry fans to come back. The prequel was excellent, the license and source material is strong and hugely inspired, yet what we got in the end is a generic platformer with horrendous controls and stock level layout. Worst of all, it lacks all the humor and vibes found in Astérix. It’s alarming that Japanese developers who never had much connection to Astérix could get the mood and feel down near perfectly, while a developer from the UK, a territory in which Astérix was hugely popular, misses the mark so completely.