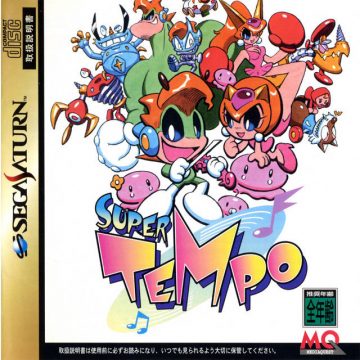 The Saturn is most fondly remembered for its strong library of 2D games, so it only makes sense that something like Tempo would find its way to the system. And in 1998, almost exactly three years after the first two games, that’s exactly what happened. Red Company teamed up with Aspect (an obscure developer known for their work on the Game Gear and Master System) and returned to the franchise with Super Tempo. While that might sound like an odd partnership, the companies’ efforts paid off, as this is easily the best game the series had to produce. Super Tempo combines Tempo‘s charm with Tempo Jr.‘s focus to create the most fully realized game in the series. 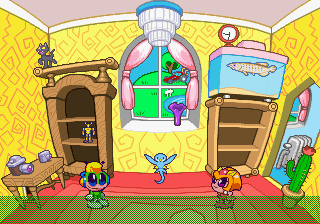 Of course, phrasing things like that may be a little misleading, given how much has changed between installments. For example, the Major Minor Show doesn’t comprise nearly as much of Super Tempo‘s focus as it did in previous games. Instead of competing on a dance show, Tempo now teams up with its eponymous host and his girlfriend Katy to rescue the Prince of Music World from Planet Technotch. (Not that you can actually play as Major Minor. You can play as Katy, though.) Thus, it only feels appropriate that the game’s art style would shift to follow suit. The dance club vibe, the series’ signature trademark, is nowhere to be seen, as Super Tempo has chosen to mirror the same Saturday morning cartoon sensibility that Earthworm Jim had mastered several years before.

Just as Tempo Jr. drew strength from its calm tone, so does Super Tempo‘s outlandish zaniness prove to be its greatest aspect. It lends the game a delightful sense of humor that just wasn’t as present in either of the previous games. Now that doesn’t mean either of those games lacked a sense of humor; just that the humor in this game is definitely more palpable. The backdrops prove that well enough, as all the peculiar curves and shapes that go into making them lend a playful quality to the levels. Likewise, the character designs are so bouncy and rubbery (even more so than they were in Tempo) that just watching the characters animate is enjoyable on its own. This comical tone isn’t just limited to the visuals, though. It permeates every part of the game’s design, from the peppy soundtrack to the gags scattered across the levels (including a sly reference to Bonk). 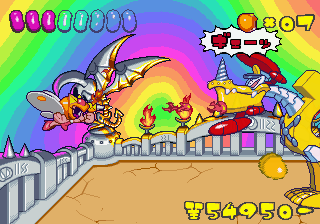 Yet it is felt most strongly during the gameplay. While the game presents itself much like a typical 2D platformer, it doesn’t make sense to approach it like one. In fact, it doesn’t make sense to approach this as a cohesive game. Super Tempo jumps so frequently between jokes that it makes a lot more sense to look at it as a loosely connected series of gags. One minute, you’re flying through classic arcade games like Asteroids and Missile Command; the next, you’ve powered up and are punching apart a robot chicken. Granted, several other contemporary platformers dabbled in similar genre mixing experiments, but there’s no denying just how effective that approach is here. On the one hand, it provides an easy way to incorporate series mainstays into the experience, like the mini-games and the score-based ending and (to a lesser extent) collecting notes to form a song. Although these features occupy a minor role in the grand scheme of things, they feel consistent with everything else the game is doing.

Which is precisely why the game’s humorous tone works as well as it does: it allows the game to have a consistent image in the first place, something neither of its predecessors can claim. Tempo had trouble conveying a proper mood in the gameplay, and while Tempo Jr. didn’t suffer that problem, the game could only avoid it through negation. Super Tempo succumbs to neither of these problems. By switching so rapidly from gag to gag to gag, the player knows exactly what they’re going to get. What’s more, they’re more likely to enjoy it. Putting aside the non-sequitur side of the game, what makes Super Tempo work is how involved the world is. All those gags bring the game world to life. Each one reaches out to you, asking you to interact with it or laugh or just get yourself involved with what the game’s presenting you. Even the power-ups get in on the fun: they’re more interested in making you laugh than they are in actually powering you up. 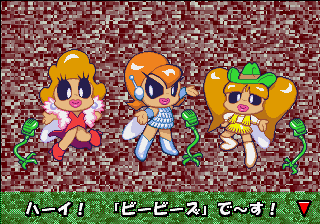 Unfortunately, for as great as the game was, Super Tempo was never released outside Japan. It’s easy to see why: It was a 2D mascot platformer (a genre that wasn’t as respected as it had once been), and it was released for the Saturn in 1998, well after the PlayStation had completely eclipsed it. Outside importers, it’s hard to imagine what audience this game would have had at the time. So it shouldn’t be any surprise that Tempo quietly faded from existence after that. It hasn’t even been referenced in later games, like some of Sega’s other forgotten titles have. Still, as far as final games go, Super Tempo left the series on a high note. In making this game, Red Company cut away every unnecessary frill and imparted just the right amount of personality the series had always needed.