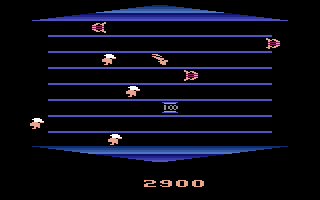 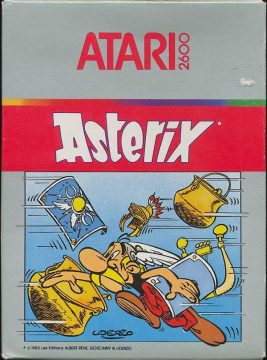 The very first video game to feature our favorite mustachioed hero was released on the Atari 2600, during the period in which Atari was losing its footing in Europe at a rapid speed. Astérix is an arcade style action game where the goal is to steer Astérix (depicted with a crude sprite slightly resembling his head) between 8 panels to pick up various treasures like magic cauldrons and avoid the deadly lyres of Assurancetourix. The game, like most of its counterparts at the time, loops infinitely making the goal of the game simply to acquire the highest score without dying. The lyres speed up as you gain more points, making it a challenging battle of reflexes and luck to get the high score. The game was designed by Steve Woita who would later go on to do programming for Sega.

The first Astérix game is not really a true Astérix game, however. Seasoned Atari gamers will probably already have gazed on the screenshots and feel they look awfully familiar. That’s because this game was released earlier under an entirely different title, that being Taz, based on the Looney Tunes character. In that game Taz must avoid bundles of dynamite while picking up hamburgers. Other than the sprites, there are no differences between the two games. Both Astérix and Taz could be seen as variations of Turmoil, another Atari game with quite similar gameplay released one year prior. It’s actually decent in its own right and provides some of the classic instant gaming fun that the Atari 2600 is famous for.

The game saw a full release in Europe. However, a small scattering of NTSC cartridges were produced and released in North America, though it is uncertain if it was ever sold in the US or just in Canada. Because of the extremely limited run, Astérix is considered one of the rarest NTSC games on the Atari 2600 and will fetch several hundred US dollars for the cartridge alone. The PAL version is more common and can be found with relative ease. 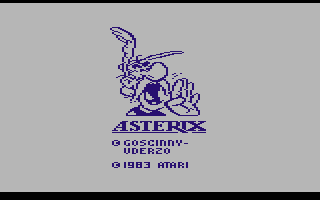 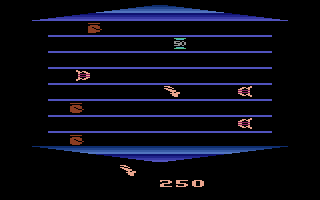